Melissa Howard holding her fake diploma, sitting next to her mother (photo provided by Melissa Howard, presented at: WindermereSun.com) 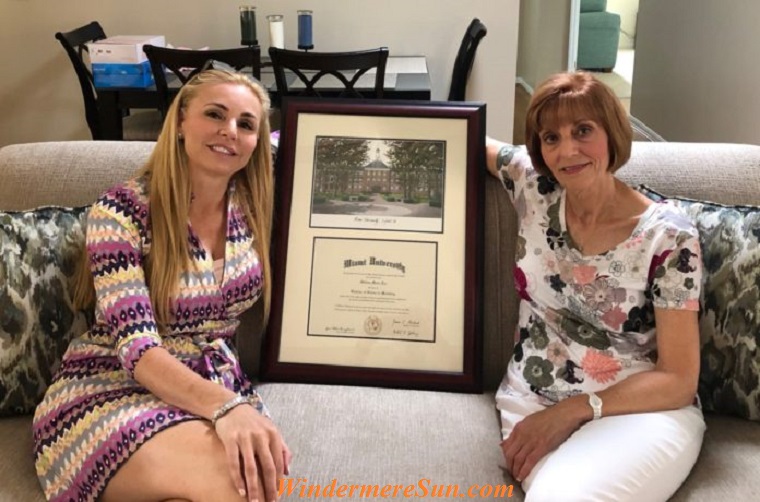 Melissa Howard holding her fake diploma, sitting next to her mother (photo provided by Melissa Howard, presented at: WindermereSun.com)

On August 14, 2018, the CBSMiami news service reported about the Republican candidate, Melissa Howard, a medical trade show owner from Sarasota,  withdrawing from a race in Southwest Florida’s House District 73 (in Manatee and Sarasota counties),  a day after vowing to stay in the campaign while acknowledging that she faked her college diploma and would “lead by example from now on.”

Previously, after Howard was accused of lying about her college degree, Melissa Howard of Sarasota claimed to have flown to her alma mater for proof. She then posted a photo of herself with a framed diploma that indicated her bachelor of science degree was in marketing (according to FLA News), but the Miami University in Ohio does not offer such a degree program (according to Washington Post).

Donna Hayes, former Manatee Republican chair, indicated that Melissa Howard’s political consultant threatened Hayes, telling Hayes that, “...if you should pursue this any further and ask her (Melissa Howard) to resign, bad things are going to happen to you.” below:
Howard acknowledged that she faked her diploma to cover a story about graduating from Miami University in Ohio. But she also indicated at that time that FLA News Online’s uncovering of the deception wouldn’t drive her from the election campaign. She posted on Facebook on Monday (August 13, 2018) afternoon, “I would like to apologize to my family and my supporters for this situation….It was not my intent to deceive or mislead any one. I made a mistake in saying that I completed my degree. What I did was wrong and set a bad example for some one seeking public service. I am staying in the race and intend to win and lead by example from now on.”

By Tuesday (August 14, 2018) afternoon, the Department of State had not yet received notice of Howard’s withdrawal from the race.

Howard said in a statement released to media, “I have come to the realization that the right thing to do for my community is to withdraw from the race. I made a terrible error in judgement.” This move by Howard means that Republican Tommy Gregory of Sarasota will move from the primary to the general election.

At this day and age, with the ease of communication and documentation, I am surprised any one would attempt to fake his/her credential or degree, especially given that there is no requirement for college degree in order to run for public offices in Florida. Forging a college degree is a first degree misdemeanor in Florida. So, Howard could potentially face up to one year in jail. Having said that, with primaries in Florida just being two weeks away, I would also encourage all districts and all parties to carefully vet their candidates before the election day. We do not need any more political candidates or officials who would be willing to defraud the American people.

Since many voters have already mailed in their votes, it is possible that if Melissa Howard does not withdraw from the election, she may still win the Republican primary. If she continues to win the Florida House District 73, might we end up with a first House Representative to have to serve in jail during her first year in office?