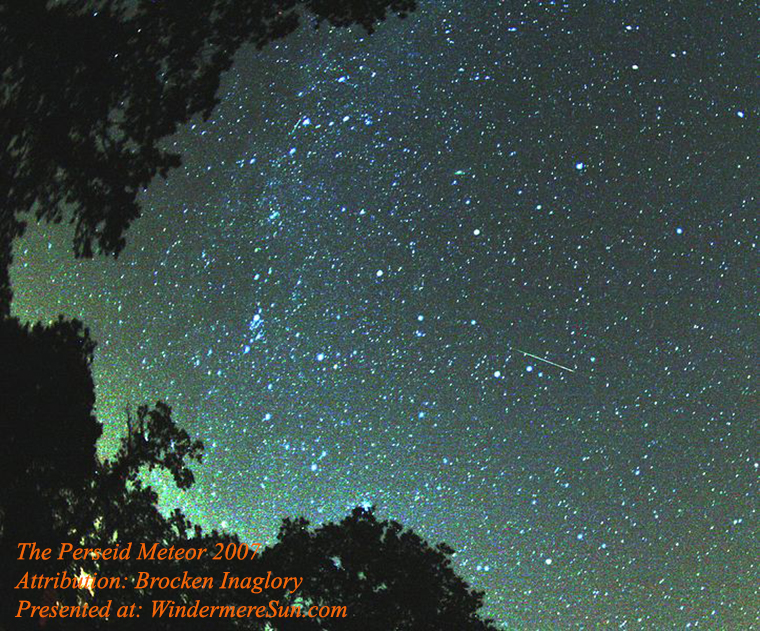 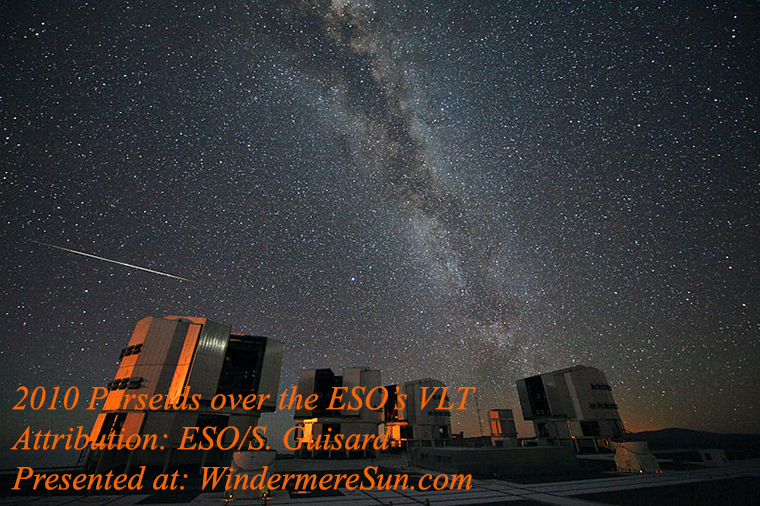 The 2010 Perseids over the ESO’s VLT (Attribution: ESO/S. Guisard, Presented at: WindermereSun.com)

The best meteor shower of the year peaks Aug. 11th-13th when Earth passes through a stream of debris from giant comet 109P/Swift-Tuttle. NASA’s network of all-sky meteor cameras is already picking up strong activity over the USA, counting 86 Perseid fireballs during the four day period Aug. 4th-7th.

The Perseid meteor shower of 2018 will take place during nearly new moon, so it won’t be interfering with the meteor shower show, and is expected to be the best meteor shower in 2018. Be sure to check your local weather forecast and hopefully there won’t be any fog or rain.

The Perseids are prolific meteor showers associated with the comet Swift–Tuttle. The Perseids are so called because the point from which they appear to hail (called the radiant) lies in the constellationPerseus. The name is derived from the word Perseidai (Greek : Περσείδαι), the sons of Perseus in Greek mythology.

Excerpt below, in italics, from wikipedia, on Perseids:

The stream of debris is called the Perseid cloud and stretches along the orbit of the comet Swift–Tuttle. The cloud consists of particles ejected by the comet as it travels on its 133-year orbit. Most of the particles have been part of the cloud for around a thousand years. However, there is also a relatively young filament of dust in the stream that was pulled off the comet in 1865, which can give an early mini-peak the day before the maximum shower. The dimensions of the cloud in the vicinity of the Earth are estimated to be approximately 0.1 astronomical units (AU) across and 0.8 AU along the latter’s orbit, spread out by annual interactions with the Earth’s gravity.

The shower is visible from mid-July each year, with the peak in activity between 9 and 14 August, depending on the particular location of the stream. During the peak, the rate of meteors reaches 60 or more per hour. They can be seen all across the sky; however, because of the shower’s radiant in the constellation of Perseus, the Perseids are primarily visible in the Northern Hemisphere. As with many meteor showers the visible rate is greatest in the pre-dawn hours, since more meteoroids are scooped up by the side of the Earth moving forward into the stream, corresponding to local times between midnight and noon, as can be seen in the accompanying diagram. While many meteors arrive between dawn and noon, they are usually not visible due to daylight. Some can also be seen before midnight, often grazing the Earth’s atmosphere to produce long bright trails and sometimes fireballs. Most Perseids burn up in the atmosphere while at heights above 80 kilometres (50 mi).