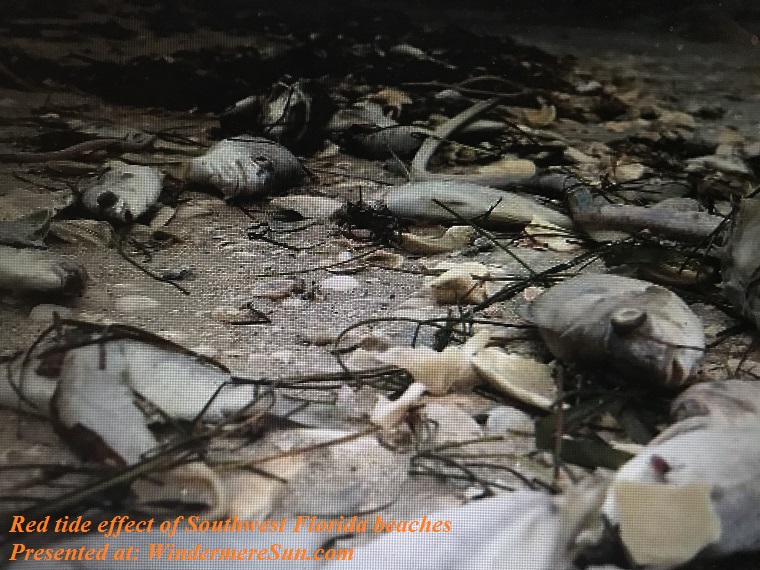 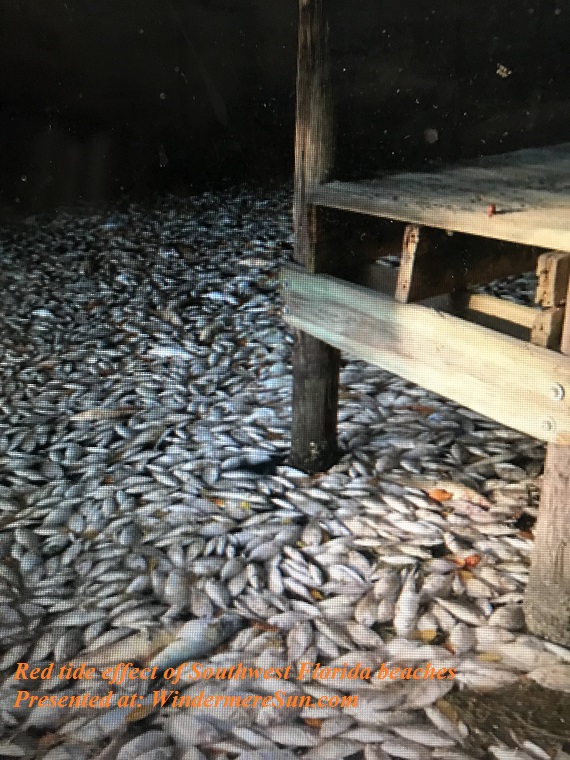 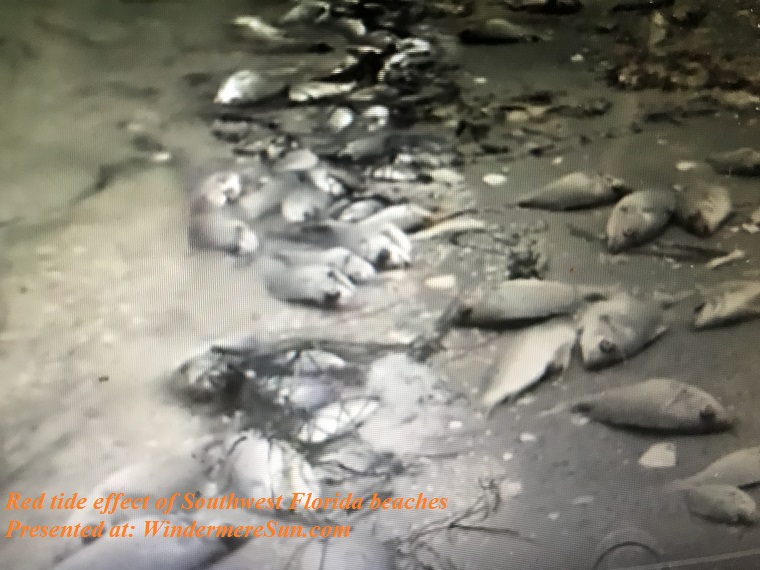 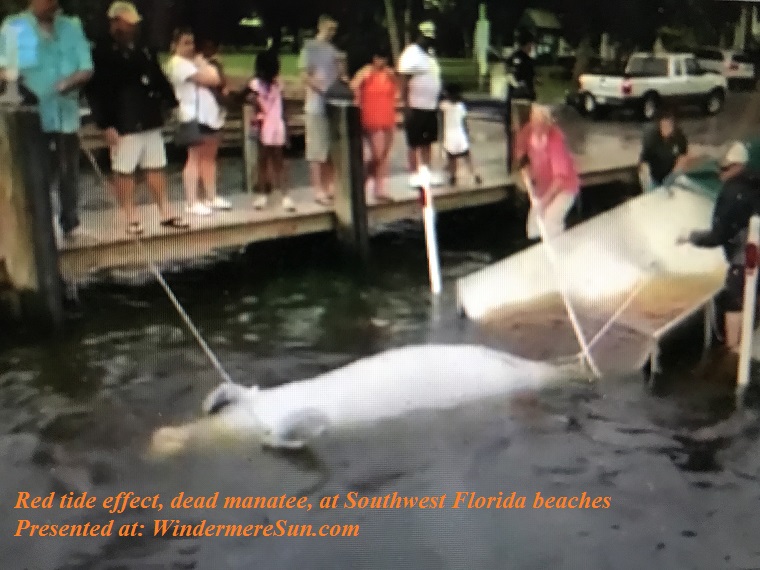 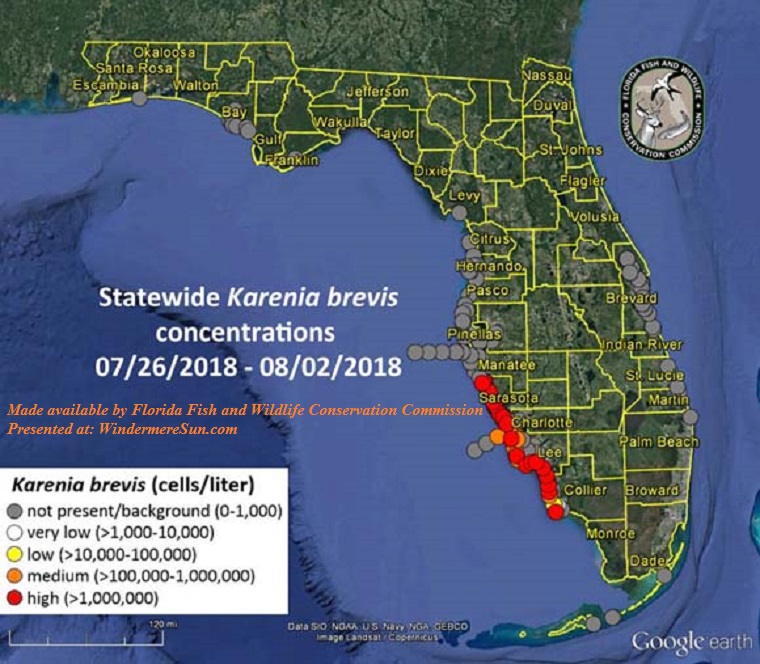 
A bloom of the Florida red tide organism , Karenia brevis, is persisting in Southwest Florida. Florida’s southwest coast, normally brimming with active marine wildlife, has become a massive grave yard this summer. Dead fish and various marine animals by the thousands have clogged inlets and canals. Since Sunday, July 29, 2018, dead Goliath grouper and massive reef fish have floated to the surface. At least 90 sea turtles have been found stranded as the tide stretches into nesting season. On some Florida southwest beaches, it is impossible to walk without tiptoeing around dead marine fish/animals. Conditions are so bad that Governor Scott has issued Emergency Order to combat the toxic algal blooms, known as red tide, in South Florida early in July. These red tides have killed fish, sea turtles, sea birds, sharks, and multiple manatees. Florida and Texas have been dealing with red tides each year, but this year the effects have been unprecedented.  According to Florida Department of Environmental Protection officials, it’s been more than a decade since the Gulf of Mexico has blooms that lasted this long. So far, about 100 miles of shorelines have been affected by red tides, and officials have no idea how long it will last. Florida Fish and Wildlife Conservation Commission spokeswoman Michelle Kerr said, “It’s hard to predict more than a few days out.” “Red Tide Facts and Myths“, below:
According to the NOAA (National Oceanic and Atmospheric Administration), even though most algal blooms are not harmful and are actually helpful as a major energy source in the ocean’s  food web, toxins can  be released into the air by red tides to cause respiratory issues, eye irritation, or asthma. Red tides have been reported in all of U.S. coastal states and will likely to happen more often in the future. Scientists will be trying to find and forecast the locations of these red algal blooms so that people will have time to prepare for a red tide and its effects. Red tides are measured in terms of: water’s algal concentration, duration, and effects on wildlife. The red tides of 2018 have killed more and lasted longer than many from the past, the longest on record since 2006. Usually, these red tides occur in late summer or early fall and last for three to five months. Florida’s current red tide started in October and has lasted more than nine months so far.

Excerpt from wikipedia, on Possible Causes For Increased Rates In Blooms, in italics, below:

One major possible cause for increased rates in “red tide” outbreaks is the increase in agricultural runoff which occurs around where a major drainage enters the Gulf of Mexico. The Caloosahatchee River in SW Florida is a prime example of a region that is highly prone to K. brevis outbreaks. The Caloosahatchee River drains water from Lake Okeechobee and collects drainage water from a large portion of Florida’s central farmland. Regions such as this have been the epicenters for such outbreaks. There has been a significant correlation identified between increased human population/activity and increased outbreaks. So finding ways to reduce how much “fertilizer” we dump into the oceans might be a viable solution to reducing the rate of K. brevis outbreaks in the Gulf of Mexico.