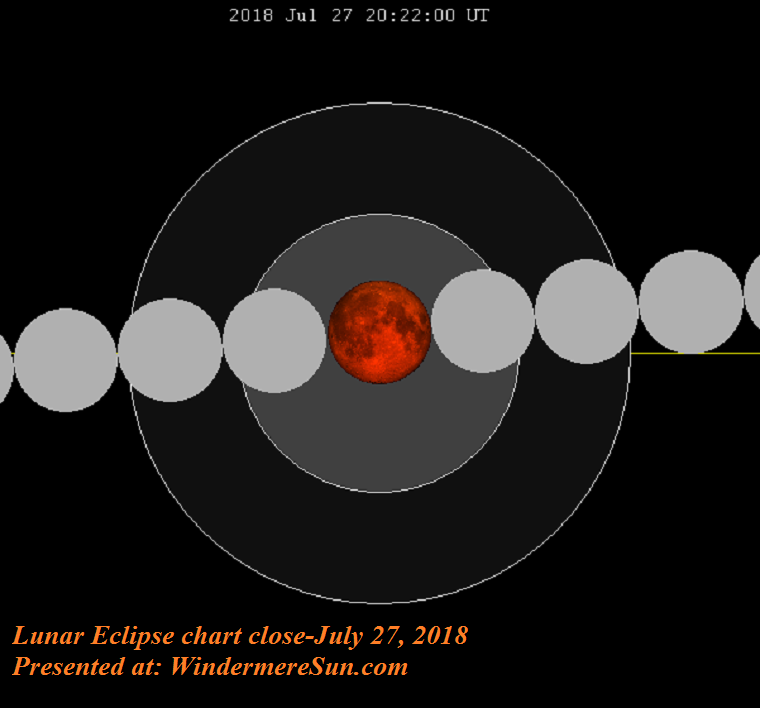 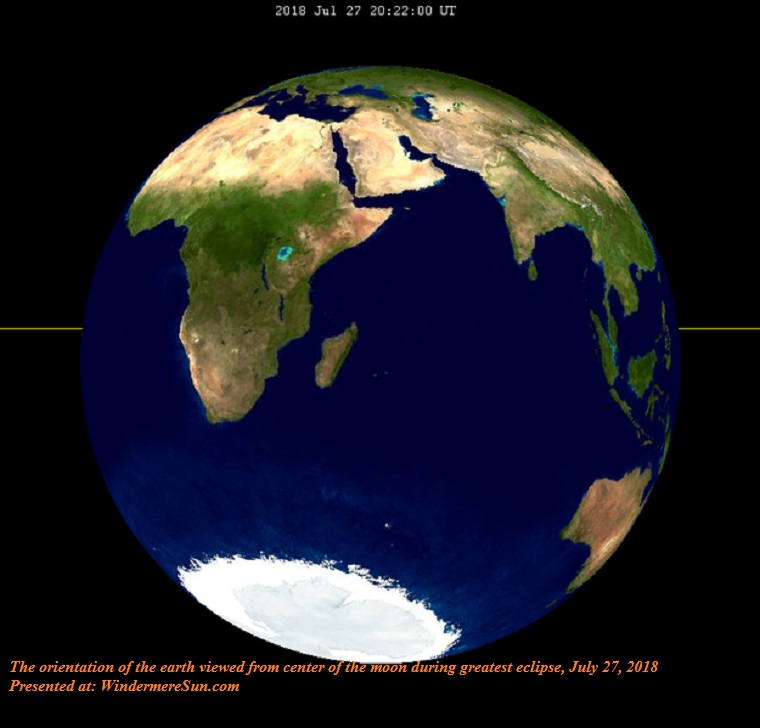 The orientation of the earth as viewed from the center of the moon during greatest eclipse of July 27, 2018 (presented at: WindermereSun.com)

A total lunar eclipse will occur on July 27, 2018. The Moon will pass through the center of the Earth’s shadow. This will be the first central lunar eclipse since June 15, 2011.

Since it will occur near apogee, this eclipse will also be the longest total lunar eclipse in the 21st century. Totality will last approximately 103 minutes. It is not possible to view this Lunar Eclipse in Orlando because the moon is below the horizon during this eclipse. The total duration of the eclipse is  6 hours, 14 minutes. The total duration of the full eclipse is 1 hour, 43 minutes (or 103 minutes).  This eclipse will be the second total lunar eclipse in 2018, after the one in January. The eclipse will occur simultaneously with the perihelic opposition of Mars, a coincidence that happens once every 25,000 years. Mars will also be the closest to earth in 15 years.

A lunar eclipse occurs when the Moon passes within Earth’s umbra (shadow). As the eclipse begins, Earth’s shadow first darkens the Moon slightly. Then, the shadow begins to “cover” part of the Moon, turning it a dark red-brown color (typically – the color can vary based on atmospheric conditions). The Moon appears to be reddish because of Rayleigh scattering (the same effect that causes sunsets to appear reddish) and the refraction of that light by Earth’s atmosphere into its umbra.

The following simulation shows the approximate appearance of the Moon passing through Earth’s shadow. The Moon’s brightness is exaggerated within the umbral shadow. The northern portion of the Moon was closest to the center of the shadow, making it darkest, and most red in appearance.

The moon will glide into Earth’s shadow Friday in what will be the longest lunar eclipse of the century. The eclipse will stretch from South America to New Zealand on Friday and last almost four hours, causing the moon to appear red, a phenomenon referred to as a blood moon, below:  Millions in Africa and Europe were treated with a chance to see the longest total lunar eclipse in the 21st century. It wasn’t visible in the U.S. CBS News foreign correspondent Debora Patta in Johannesburg, South Africa, and Hakeem Oluseyi, a professor of physics and space science at the Florida Institute of Technology, in Washington, D.C., joined CBSN to discuss, below:
Gathered, written, and posted by Windermere Sun-Susan Sun Nunamaker
More about the community at www.WindermereSun.com