Peter Strzok’s Hearing: Are the GOP’s Working For Russia? 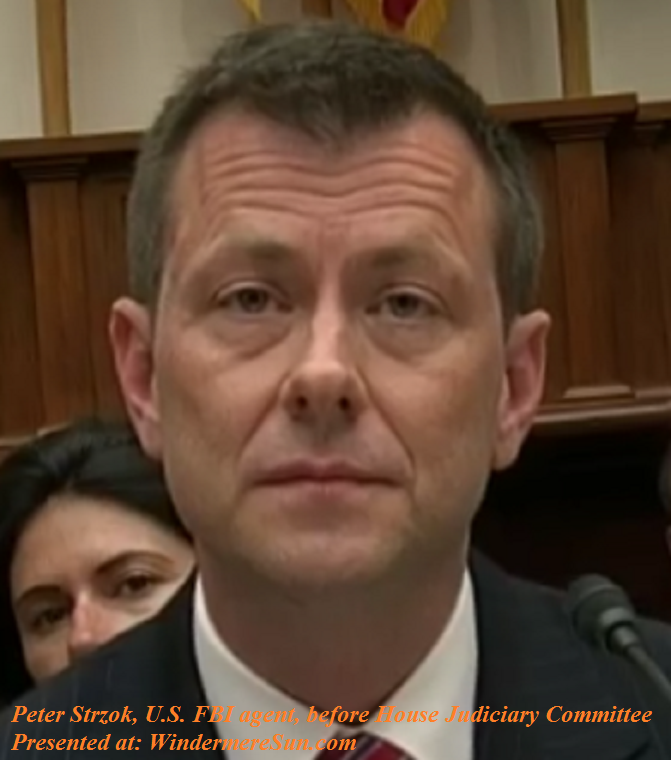 In a statement by Aitan Goelman, lawyer for Peter Strzok, on June 14, 2018, “...and credible evidence suggesting that the presidential campaign of a major party candidate was actively colluding with a hostile foreign power in a way that could undermine the integrity of an American Presidential election.”

Peter Strzok indicated that Director of FBI, James Comey (back then), ordered him (Peter Strzok) to focus or prioritize the Russia investigation ahead of the Clinton email investigation because of the greater danger and threat it posed.

Excerpt from wikipedia, in italics, about Peter Strzok, below:

Peter Strzok is a United States Federal Bureau of Investigation (FBI) agent and former Deputy Assistant Director. Strzok was the Chief of the Counterespionage Section and led the FBI’s investigation into Hillary Clinton’s use of a personal email server. Strzok rose to become the Deputy Assistant Director of the Counterintelligence Division, the second-highest position in that division. He also led the FBI’s investigation into Russian interference in the 2016 United States elections.

In June and July 2017, Strzok worked on Robert Mueller‘s Special Counsel investigation into any links or coordination between Donald Trump‘s presidential campaign and the Russian government. Mueller removed Strzok from the Russia investigation when he became aware of criticisms of Trump contained in personal text messages exchanged between Strzok and a colleague. The revelation of the text messages led to accusations by Republican congressmen and conservative media that Strzok was involved in a conspiracy to undermine the Trump presidency; conservatives used the text messages as part of a campaign to discredit Mueller’s investigation. The Department of Justice, led by Republican Jeff Sessions, has defended Mueller’s response to the text messages. A February 2018 comprehensive review by The Wall Street Journal of Strzok’s messages showed that “texts critical of Mr. Trump represent a fraction of the roughly 7,000 messages, which stretch across 384 pages and show no evidence of a conspiracy against Mr. Trump”. After the release of the DOJ-OIG report, which revealed further anti-Trump texts from Strzok, he agreed to testify before the House Judiciary Committee. How can Wray say Strzok was not punished, when he returned to the FBI from the Mueller Investigation, when he went from second highest Intel agent to HR employee? Isn’t that a demotion (punishment)?

Video below: “Peter Strzok Holds His Own As Republican Try To Put On Show At Hearing”

Video below: “Complete exchange between Rep. Trey Gowdy and FBI Deputy Assistant Director Peter Strzok” where Strzok’s comment about “Trump is a disaster and I have no idea how destabilizing his presidency would be“. This is a joint hearing of the House Oversight & Government Reform and House Judiciary committees:  It is crazy to insist that Peter Strzok to answer questions involving counterintelligence information within an open public hearing. It makes one wonder if the members of GOP’s are working for the Russian government.

Video below: “Lawrence O’Donnell Has Never Seen A Hearing As Bad As Strzok’s”


Gthered, written, and posted by Windermere Sun-Susan Sun Nunamaker
More about the community at www.WindermereSun.com