Typhoon Maria Made Its Touchdown, The Worst Is Over 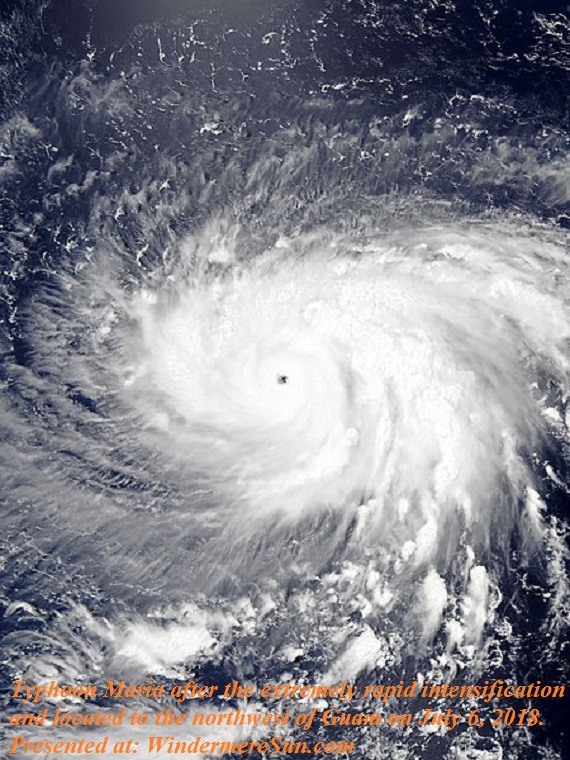 Typhoon Maria after the extremely rapid intensification and located to the northwest of Guam on July 6, 2018 (presented at: WindermereSun.com) 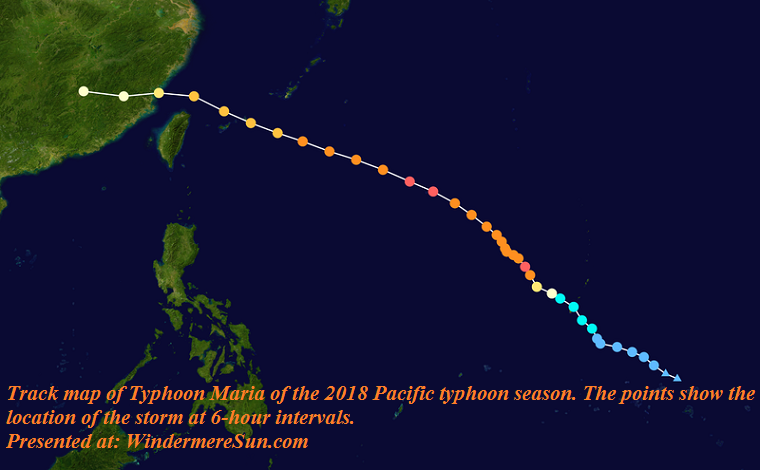 Track map of Typhoon Maria of the 2018 Pacific typhoon season. The points show the location of the storm at 6 hour intervals. When it passed Taiwan, it was at category 2 (96-110mph or 154-177 km/h) (presented at: WindermereSun.com)

A quick note to our readers originally from China, Japan, Taiwan, and the Pacifics: the worst of Typhoon Maria is over.

Typhoon Maria (known in the Philippines as Typhoon Gardo) is currently a weakening tropical cyclone over Jiangxi, China. It was the most intense tropical cyclone in the Western Pacific in 2018, tied with Jelawat. Developing into the eighth named tropical storm of the northwest Pacific Ocean and impacting the Mariana Islands on July 4, Maria strengthened into the fourth typhoon of this season during an extremely rapid intensification next day, due to favorable environmental conditions. The typhoon reached its first peak intensity on July 6; subsequently, Maria weakened slightly due to an eyewall replacement cycle, but it re-intensified and reached its second peak intensity on July 8. Later, it started to gradually weaken because of colder sea surface temperatures. After hitting the Yaeyama Islands and affecting Taiwan on July 10, Maria remained powerful and ultimately made landfall over Fujian, China early on July 11.  At around 09:10 CST (01:10 UTC) on July 11, Maria made landfall over the Huangqi Peninsula of Lianjiang County, Fuzhou in Fujian, China with ten-minute maximum sustained winds at 155 km/h (100 mph) and the central pressure at 955 hPa (28.20 inHg).
Video below: Taiwan Prepares for Typhoon Maria: