Judge Brett Kavanaugh, U.S. Court of Appeals for the District of Columbia (presented at: WindermereSun.com) 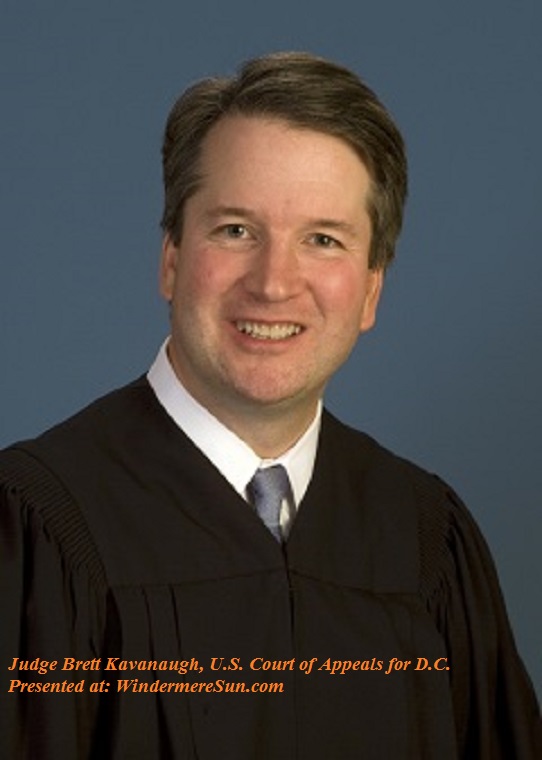 Judge Brett Kavanaugh, U.S. Court of Appeals for the District of Columbia (presented at: WindermereSun.com)

According to The New York Times, on July 2, 2018, Kavanaugh was one of four circuit judges to receive a personal 45-minute interview by President Donald Trump to replace Justice Anthony Kennedy. On July 9, President Trump announced  that he has nominated Brett Kavanaugh for the Supreme Court, replacing Justice Anthony Kennedy. The abortion rights activists have been worried about the possibility of Roe v. Wade (the landmark Supreme Court ruling that legalized abortion nationwide 1973) being overturned by a more conservative Supreme Court. So, surely, there will be questions from Democrats concerning how he might rule on abortion rights if he will be confirmed. Even though Kavanaugh did not express outright opposition to Roe v. Wade ruling, Kavanaugh dissented from the DC Circuit ruling to allow detained undocumented immigrant teen to seek an abortion. In his dissent, Kavanaugh wrote the Supreme Court held that “the government has permissible interests in favoring fetal life, protecting the best interests of a minor, and refraining from facilitating abortion….the government may further those interests so long as it does not impose an undue burden on a woman seeking an abortion.” He added that the majority opinion was “based on a constitutional principle as novel as it is wrong: a new right for unlawful immigrant minors in U.S. government detention to obtain immediate abortion on demand.”But he also added, that “all parties to this case recognize Roe v. Wade and Planned Parenthood v. Casey as precedents we must follow.“
Much remains to be seen as the process of confirmation proceeds.

To get to know about Brett Kavanaugh, please refer to the excerpt from wikipedia, in italics, below:

Brett Michael Kavanaugh (born February 12, 1965) is an American judge and former secretary. He currently serves as a United States Circuit Judge of the United States Court of Appeals for the District of Columbia Circuit. He was White House Staff Secretary during the Presidency of George W. Bush. Kavanaugh has been nominated to become an Associate Justice for the United States Supreme Court.

An attorney working for Ken Starr, Kavanaugh played a lead role in drafting the Starr Report, which urged the impeachment of President Bill Clinton. Kavanaugh led the investigation into the suicide of Clinton aide Vince Foster. After the 2000 U.S. presidential election, in which Kavanaugh worked for the George W. Bush campaign in the Florida recount, Kavanaugh joined Bush’s staff, where he led the Administration’s effort to identify and confirm judicial nominees.

Kavanaugh was nominated to the D.C. Appeals Court by Bush in 2003. His confirmation hearings were contentious and stalled for three years over charges of partisanship. Kavanaugh was ultimately confirmed in May 2006 after a series of negotiations between Democratic and Republican senators.

Kavanaugh was nominated by President Donald Trump on July 9, 2018, to become an Associate Justice of the Supreme Court of the United States, following the vacancy created by the pending retirement of Associate Justice Anthony Kennedy.

Below, are his positions on several important issues, from wikipedia, in italics:

If Kavanaugh is confirmed, by all accounts, we are most likely to see decades of conservative rulings to take place at Supreme Court.