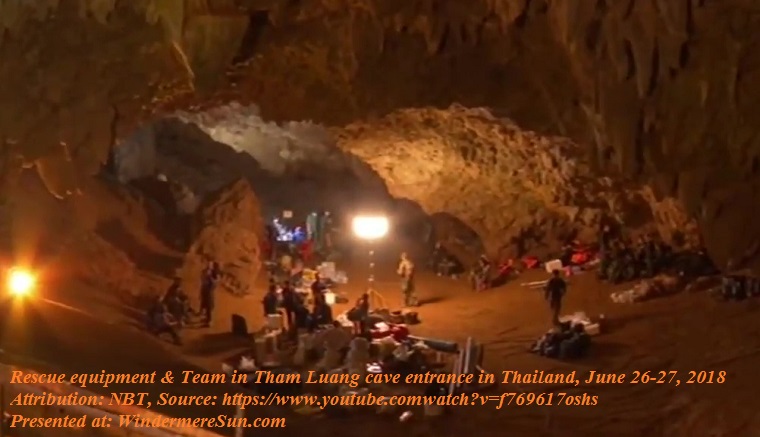 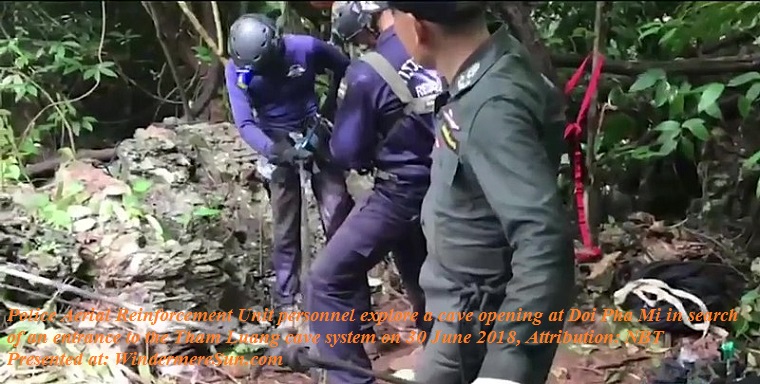 Pumps used to divert water from lakes that drain the Tham Luang cave, in an effort to reduce water levels in the cave during June-July, 2018 (attribution: NBT, Source: https://www.youtube.com/watch?v=0JV0tKDUs9M, presented at: WindermereSun.com)


The bad news is that the 12 Thai soccer players (aged 11 to 16) and their 25 year old coach are still trapped deep inside a system of caves in northern Thailand, the Tham Luang Nang Non cave complex, after two week.  The oxygen levels in the cave had dropped to 15%, a level that would pose serious risk of hypoxia. The good news is that these boys and their coach were discovered by two UK divers (Rick Stanton and John Volanthem, an A-team of cave divers) nine/ten days after the soccer team disappeared and that there is a rescue team composed of people not just from Thailand, but also from U.S., UK, Australia, Israel, etc. Now, it’s a global effort to try to get them out of the cave and to bring them home. The cave system is at least 4 miles long. The difficulty lies in the fact that the soccer team does not know how to cave dive.

On Thursday (July 5, 2018) night, Tesla and Space X Founder/CEO Elon Musk tweeted about an idea to use an inflatable nylon tube to help the kids escape. By Friday (July 6, 2018) afternoon, Musk’s thinking had evolved. He tweeted that his team was working on building “double-layer Kevlar pressure pods with Teflon coating to slip by rocks.” A mid-day tweet on Saturday provided another update:

Elon Musk, in addition having already sent 2 of their Boring engineers to the cave sight, tweeted on Saturday  (July 7, 2018) that a team of SpaceX engineers is hours away from completing work on a “tiny kid-sized submarine” (using the liquid oxygen transfer tube of Falcon rocket as hull, light enough to be carried by 2 divers, small enough to get through narrow gaps),  that could be used to extract 12 teenagers and preteens who are stranded with their soccer coach in a flooded cave in Thailand. Musk has had a team of engineers working on the problem for the last couple of days and has been keeping the world updated on the work via Twitter. To see the update of this rescue mission, check out Elon Musk’s twitter: @elonmusk

This is truly a demonstration of our global unification: what affects one earthling has impact on all of us. Such global effort in the rescue of this Thai soccer team is truly heart warming and gives us all hope for the future.

The question now is: How to get them out? Discussion of “no easy solution” and potential problems involved in waiting, below: Suggestions as to what to do next in terms of rescue plans and preparations for the soccer team, below:
Gathered, written, and posted by Windermere Sun-Susan Sun Nunamaker
More about the community at www.WindermereSun.com