A Woman Climbed Lady Liberty, Reminding Us The Symbol of The Statue of Liberty, on Independence Day, July 4, 2018 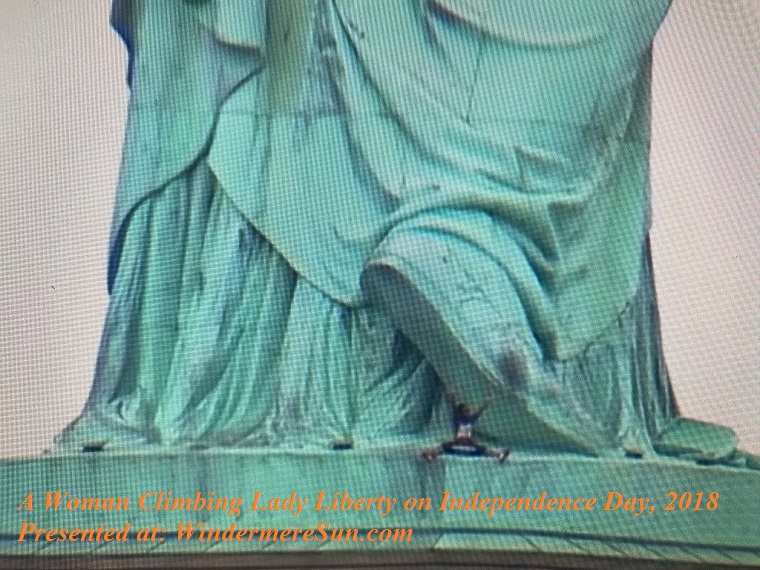 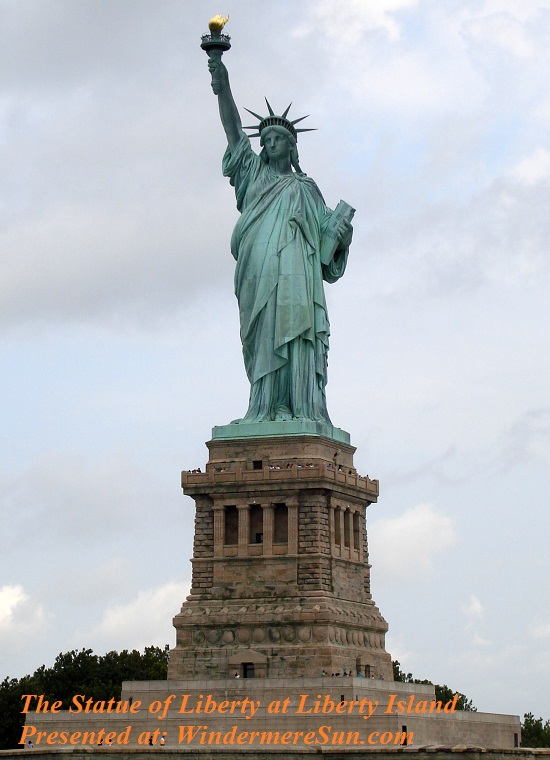 Statue of Liberty (presented at: WindermereSun.com)

This has just come down the wire: a woman has climbed to the base of the Statue of Liberty in New York City, at one point walking back and forth under the Lady Liberty’s sandal and then sat down to unfurl a small flag or banner.  The NYPD is building a rope rescue team to try to help bring this woman down from the base. NYPD officers do not believe that she will come down on her  own. Liberty Island has been evacuated after seven people who were believed to be protesters, were arrested on Liberty Island. According to NYPD, three of its emergency service units and a harbor unit are on scene.


At this point, Windermere Sun would like to take this opportunity to remind us of the history and symbol of Lady Liberty, in videos below:

If you were to visit the Lady Liberty on the Liberty Island in 2018, this is what you would see:

Below, excerpt from wikipedia, in italics, on the subject of The Statue of Liberty:

The Statue of Liberty (Liberty Enlightening the World; French: La Liberté éclairant le monde) is a colossal neoclassical sculpture on Liberty Island in New York Harbor in New York City, in the United States. The copper statue, a gift from the people of France to the people of the United States, was designed by French sculptor Frédéric Auguste Bartholdi and built by Gustave Eiffel. The statue was dedicated on October 28, 1886.

The Statue of Liberty is a figure of a robed woman representing Libertas, a Roman liberty goddess. She holds a torch above her head with her right hand, and in her left hand carries a tabula ansata inscribed in Roman numerals with “JULY IV MDCCLXXVI” (July 4, 1776), the date of the U.S. Declaration of Independence. A broken chain lies at her feet. The statue became an icon of freedom and of the United States, and was a welcoming sight to immigrants arriving from abroad.

Bartholdi was inspired by a French law professor and politician, Édouard René de Laboulaye, who is said to have commented in 1865 that any monument raised to U.S. independence would properly be a joint project of the French and U.S. peoples. Because of the post-war instability in France, work on the statue did not commence until the early 1870s. In 1875, Laboulaye proposed that the French finance the statue and the U.S. provide the site and build the pedestal. Bartholdi completed the head and the torch-bearing arm before the statue was fully designed, and these pieces were exhibited for publicity at international expositions.

The torch-bearing arm was displayed at the Centennial Exposition in Philadelphia in 1876, and in Madison Square Park in Manhattan from 1876 to 1882. Fundraising proved difficult, especially for the Americans, and by 1885 work on the pedestal was threatened by lack of funds. Publisher Joseph Pulitzer, of the New York World, started a drive for donations to finish the project and attracted more than 120,000 contributors, most of whom gave less than a dollar. The statue was built in France, shipped overseas in crates, and assembled on the completed pedestal on what was then called Bedloe’s Island. The statue’s completion was marked by New York’s first ticker-tape parade and a dedication ceremony presided over by President Grover Cleveland.

The statue was administered by the United States Lighthouse Board until 1901 and then by the Department of War; since 1933 it has been maintained by the National Park Service. Public access to the balcony around the torch has been barred for safety since 1916.
Gathered, written, and posted by Windermere Sun-Susan Sun Nunamaker
More about the community at www.WindermereSun.com