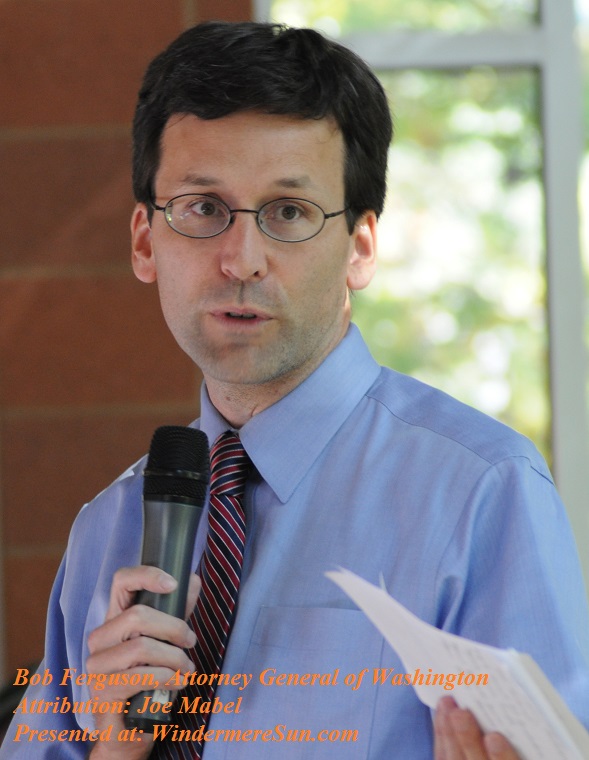 Bob Ferguson, the Attorney General (AG) of state of Washington, announced yesterday, June 21, 2018, that a group of states is suing Trump administration over its immigration family separation policy. AG Ferguson has been working on this law suit since last month. “This is a rogue, cruel, and unconstitutional policy,” Ferguson said in a press release. He mentioned that there are two main problems with Trump’s executive order: 1. it does not grandfather in children who were already separated from their parents. 2.  it is riddled with so many caveats (including issue relating to Flores Settlement Agreement), rendering it meaningless. It would require Congressional appropriation and other layers of approval which AG Ferguson says are unlikely. He indicated that Trump’s immigration policy violated equal protection rights as well as due process rights of the asylum seekers. AG Ferguson further pointed out that the executive order targets people crossing the southern border rather than any other entrances into the United States. The policy also violates APA (Administrative Procedure Act). He invited a woman from El Salvador (who was receiving death threat in El Salvador from violent gang) to Washington. But now she has been separated from her son for 31 days as a result of Trump administration’s zero-tolerance or family separation policy. AG Ferguson asked, “Do we truly lack the decency that we’re seeing being expressed by this administration?  Truly, where is the decency?” This would be the 27th law suit that Washington has brought against the Trump administration. This particular law suit is led by Washington with a coalition of states, including Massachusetts, California, Oregon, New Mexico, Iowa, Illinois, Minnesota, New Jersey, Pennsylvania, Maryland, and District of Columbia.  Ferguson anticipates that more states will join the litigation when it is filed.

As indicated in AG Ferguson’s press release, excerpt  in italics, below:

On April 6, 2018, Attorney General Jeff Sessions announced a new “zero tolerance” policy on the United States’ southern border. Instead of making case-specific evaluations of individual cases, respecting due process rights and family integrity, the Trump Administration began prosecuting all possible immigration crimes, detaining all accused adults, even those with a legitimate asylum claim. The intended and acknowledged effect of this policy has been the separation of parents and children at the border.

The Trump Administration has been clear that the purpose of the forced separation policy is not to protect children, but rather to deter potential immigrants from coming to the United States. As Senior White House adviser Kellyanne Conway said recently: “Nobody likes seeing babies ripped from their mothers’ arms … but we have to make sure that [the Department of Homeland Security’s] laws are understood through the soundbite culture that we live in.”

The Office of the Attorney General is the chief legal office for the state of Washington with attorneys and staff in 27 divisions across the state providing legal services to roughly 200 state agencies, boards and commissions. Visit www.atg.wa.gov to learn more.