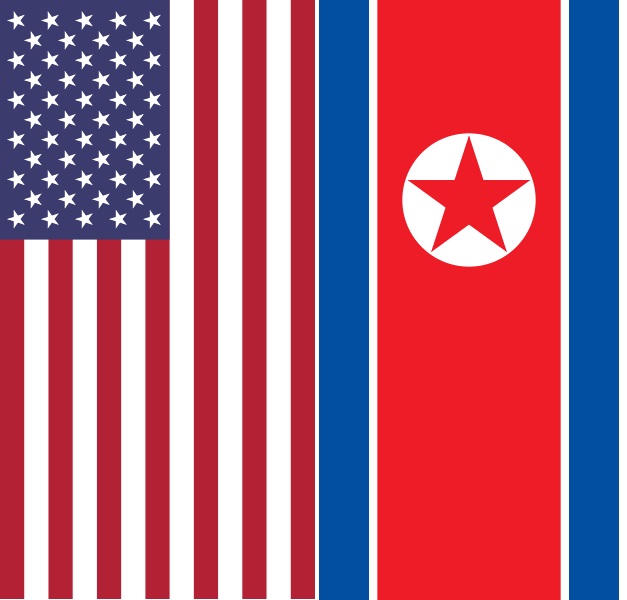 Flags of USA and North Korea (presented at: WindermereSun.com)

Within 45 minutes of a  meeting, U.S. President Donald Trump and North Korean leader Kim Jong-un have met at the Capella Hotel of the secluded Sentosa Island of Singapore on June 12, 2018, 9:00 am Singapore time (or June 11, 2018, 9:00 pm PST) . In one handshake, these two volatile leaders have changed the course of the history. This marks the first meeting of any sitting U.S. President meeting with any of the North Korean leaders. Kim is staying at the St. Regis Hotel while Trump is staying at the Shangri-la Hotel. Trump and Kim have a one-on-one meeting first, and then a second expanded bilateral meeting that will include top advisers, and a working lunch. Political analysts are observing these events with watchful eyes. Much remains to be seen as to whether the denuclearization of the Korean Peninsula will truly take place. Even if it will, it may take many years to realize. Even though there is much optimism and hope for people of Korea as well as rest of the world, security for South Korea still needs to be ascertained. Diplomacy is always preferred over war, but it is necessary to proceed with caution and care. The question of how to verify the denuclearization of North Korea remains a concern.

US President Donald Trump and Singapore Prime Minister Lee Hsien Loong met over lunch on Monday in Singapore, below:

China and South Korea weighed in and hope the meeting will be successful, despite summit-eve worries for the Korean peninsula; Greg Palkot has the latest developments for ‘Special Report’, below: Richard Fenning, chief executive officer at Control Risks, and Bloomberg’s Kevin Cirilli discuss the historic meeting between President Donald Trump and North Korean leader Kim Jong Un. They speak on “Bloomberg Markets: Asia.”below: Wendy Sherman, former undersecretary of state for political affairs, talks with Rachel Maddow about how both Donald Trump and Kim Jong Un have a lot at stake in the Singapore summit, a situation that bodes well for some success, below:   The Morning Joe panel continues its discussion of President Trump’s news conference in Singapore, and his remarks about North Korea as well as the Trump-Kim summit and the stated goal of complete de-nuclearization, below:
If you’re interested in the schedule of this meeting, just keep in mind that there is a 12 hour difference between Singapore and Washington D.C. 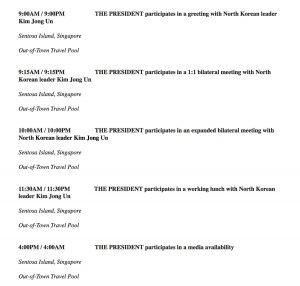