Chinchilla/Sleep Is The Best Meditation 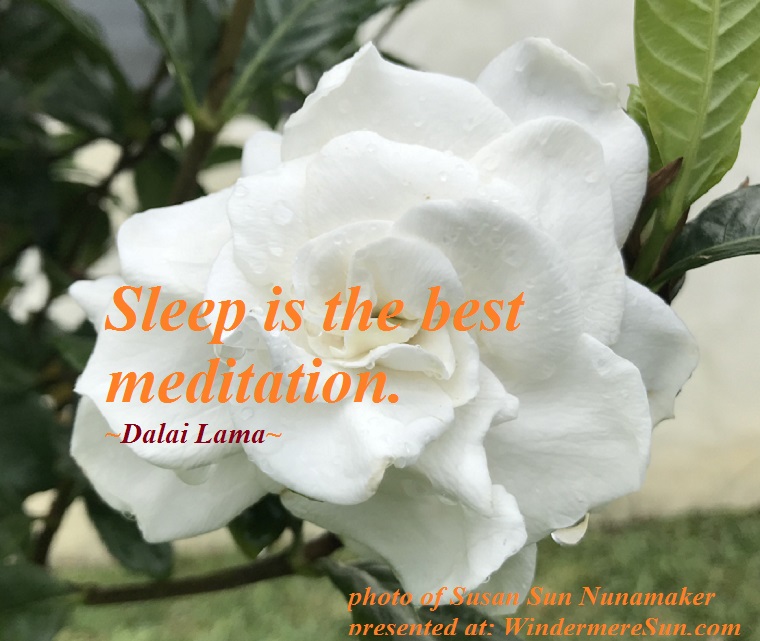 I remember those days when my daughter kept a chinchilla as a pet, the amazingly soft haired creature that preferred to bath in dust.  To understand a bit more about this creature, please refer to the excerpts taken from wikipedia, in italics, below:

Chinchillas are either of two species of crepuscular rodents of the parvorder Caviomorpha. They are slightly larger and more robust than ground squirrels, and are native to the Andes mountains in South America. They live in colonies called “herds” at high elevations of up to 4,270 m (14,000 ft). Historically, chinchillas lived in an area that included parts of Bolivia, Peru, Argentina, and Chile, but today, colonies in the wild are known only in Chile. Along with their relatives, viscachas, they make up the family Chinchillidae. They are also related to the chinchilla rat.

The chinchilla has the densest fur of all mammals that live on land. In the water, the sea otter has a denser coat. The chinchilla is named after the Chincha people of the Andes, who once wore its dense, velvet-like fur. By the end of the 19th century, chinchillas had become quite rare after being hunted for their ultra-soft fur. Most chinchillas currently used by the fur industry for clothing and other accessories are farm-raised. Chinchillas are sometimes kept as pets, and may be considered a type of pocket pet.

Dalai Lama once said that “Sleep is the best meditation.” Do you agree?

Below is an excerpt from wikipedia on the topic of Dalai Lama, in italics:

Dalai Lama  Standard Tibetan: ཏཱ་ལའི་བླ་མ་, Tā la’i bla ma [táːlɛː láma]) is a title given to spiritual leaders of the Tibetan people. They are part of the Gelug or “Yellow Hat” school of Tibetan Buddhism, the newest of the schools of Tibetan Buddhism. The 14th and current Dalai Lama is Tenzin Gyatso.

The Dalai Lama is also considered to be the successor in a line of tulkus who are believed to be incarnations of Avalokiteśvara, a Bodhisattva of Compassion. The name is a combination of the Mongolic word dalai meaning “ocean” or “big” (coming from Mongolian title Dalaiyin qan or Dalaiin khan, translated as ‘Gyatso’ in Tibetan) and the Tibetan word བླ་མ་ (bla-ma) meaning “master, guru”.

The Dalai Lama figure is important for many reasons. Since the time of the fifth Dalai Lama, his personage has always been a symbol of unification of the state of Tibet, where he has represented Buddhist values and traditions. The Dalai Lama was an important figure of the Geluk tradition, which was politically and numerically dominant in Central Tibet, but his religious authority went beyond sectarian boundaries. While he had no formal or institutional role in any of the religious traditions, which were headed by their own high lamas, he was a unifying symbol of the Tibetan state, representing Buddhist values and traditions above any specific school. The traditional function of the Dalai Lama as an ecumenical figure, holding together disparate religious and regional groups, has been taken up by the present fourteenth Dalai Lama. He has worked to overcome sectarian and other divisions in the exiled community and has become a symbol of Tibetan nationhood for Tibetans both in Tibet and in exile.

From 1642 until 1705, and from 1750 to the 1950s, the Dalai Lamas or their regents headed the Tibetan government (or Ganden Phodrang) in Lhasa which governed all or most of the Tibetan plateau with varying degrees of autonomy under the Qing Dynasty of China, up to complete sovereignty. This Tibetan government also enjoyed the patronage and protection of firstly Mongol kings of the Khoshut and Dzungar Khanates(1642–1720) and then of the emperors of the Manchu-led Qing dynasty (1720–1912). Tibet’s sovereignty was later rejected, however, by both the Republic of China and the current People’s Republic of China.