What We Can Learn From WWII Veteran William (Bill) Criswell 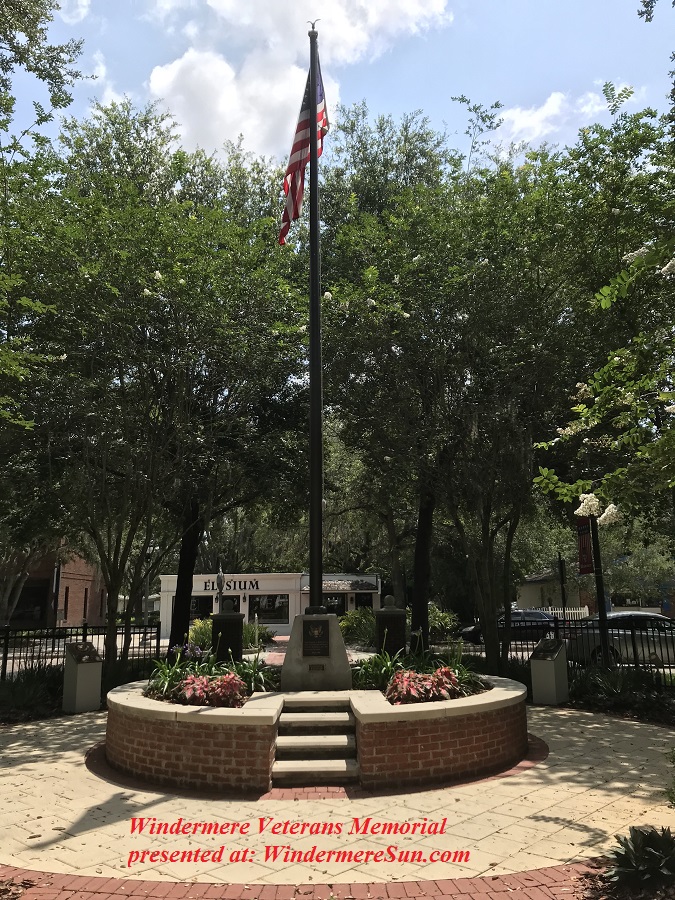 Overall view of the Windermere Veterans Memorial (presented at: WindermereSun.com)

Panaramic view of the Windermere Veterans Memorial (presented at: WindermereSun.com) 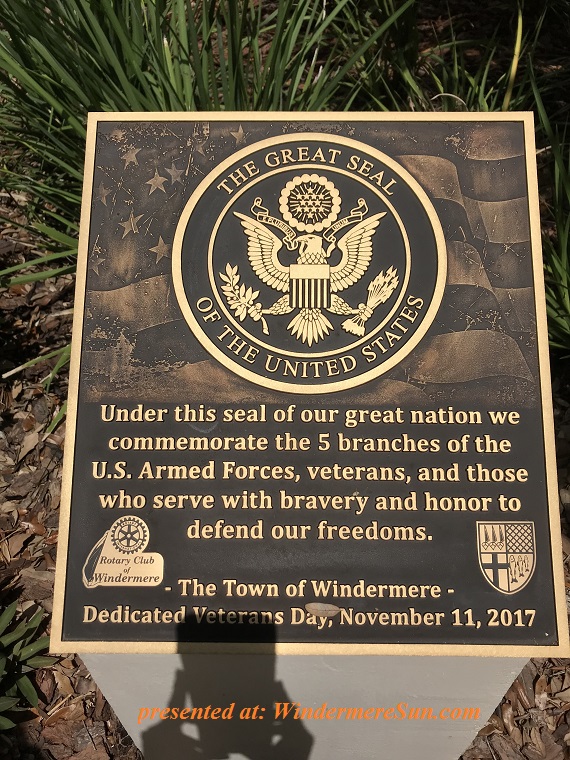 The Great Seal (presented at: WindermereSun.com) 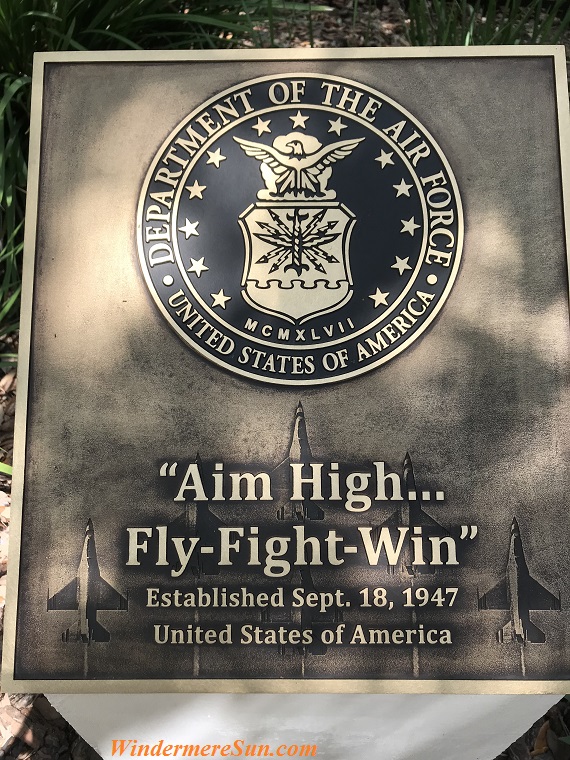 For Air Force (presented at: WindermereSun.com) 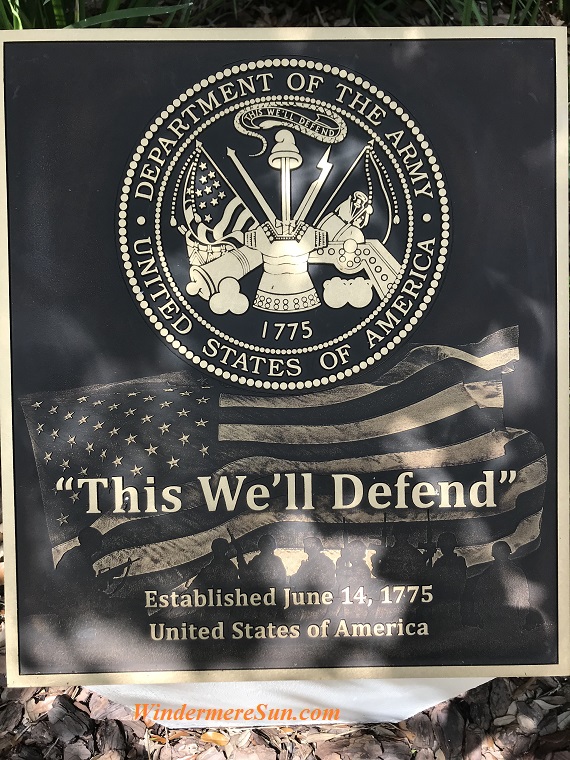 For Army (presented at: WindermereSun.com) 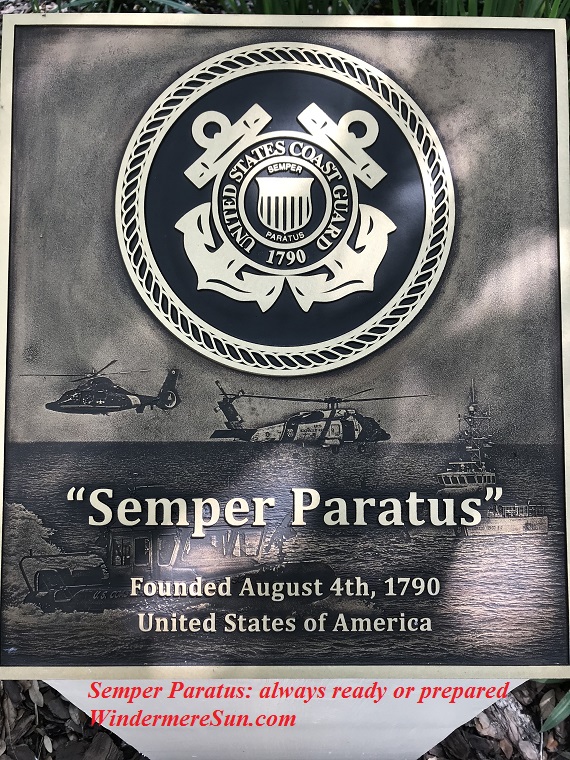 For Coast Guard (presented at: WindermereSun.com) 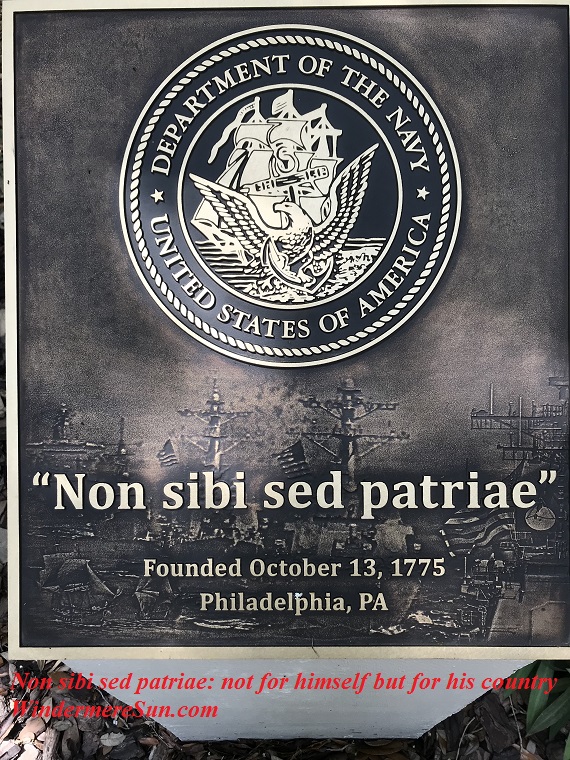 For Navy (presented at: WindermereSun.com) 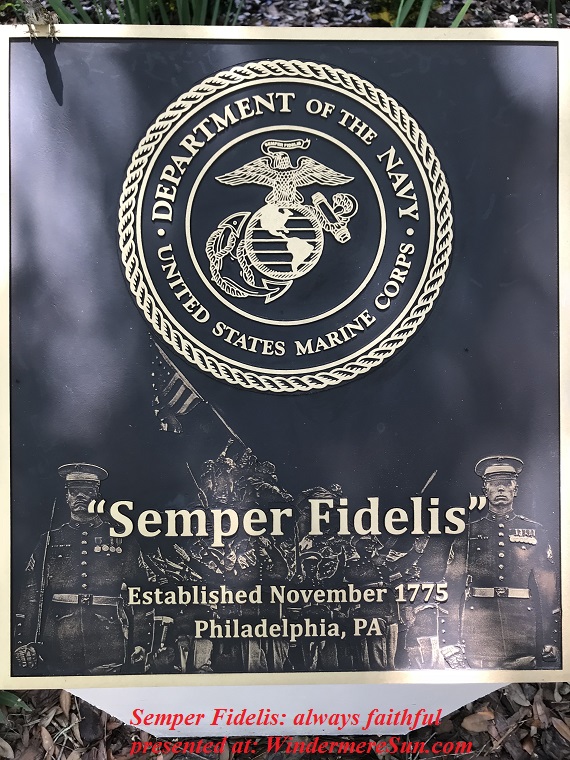 For Navy-Marine Corps (presented at: WindermereSun.com) 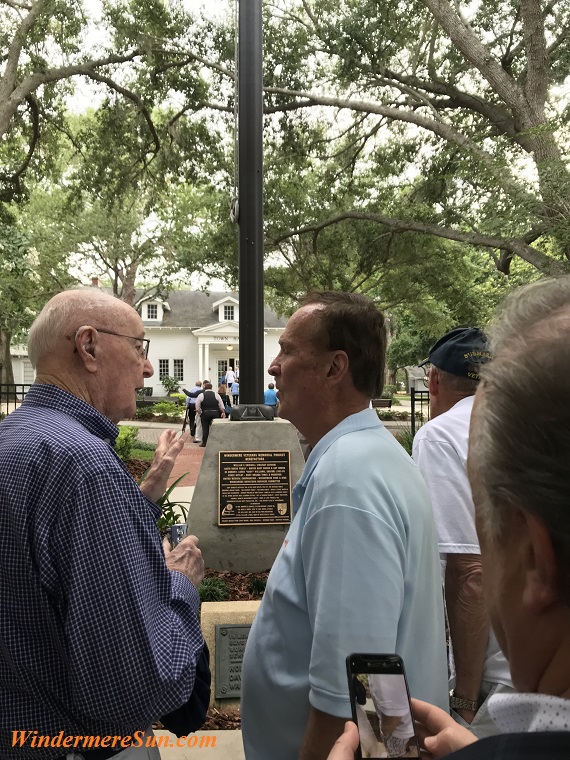 Recall our previous post at the beginning of this week, May 28, 2018, about “How People In Windermere Remember Our Veterans“, it seems befitting to end our week with some words of wisdom and reminder from our local WWII veteran and part of the driving force behind the Windermere Veterans Memorial project (along with rest of the Windermere Veteran Memorial Project Design Team: Gary Bruhn, Stephen Fasen, and Stephen Withers), Mr. William (Bill) C. Criswell of Windermere.

From past experience, I’ve learned that those who are able to live past 90 generally have much to teach us. Before I even met Mr. Criswell for an interview, I’ve already learned that he is a well informed and cautious planner. He rescheduled our original interview day/time to Tuesday, May 29, 2018, 9:30 am, after having checked the weather forecast. So that we were able to have a nice chat outdoor at the Windermere Veterans Memorial without being drenched.   At age 93, Mr. Criswell is still driving, very cautiously. His cautious nature brought him to Trinidad (East of North Africa)  during WWII, as one of the 325,000 men served as Seabees during WWII. His duty was building hospital and treating the water in preparation for casualties due to arrive from North Africa. Below, Mr. Criswell describes the sentiment at the time, when Americans all united to protect democracy, “men and women, young and old, even children had a role….they knew stakes were high. Defeat was not an option….entire nation came together with discipline, courage, and self-sacrifice to achieve great victory of good over evil….more than 400,000 of our countrymen gave their lives to achieve this victory….their legacy is a legacy of freedom. It is our legacy.”

The first Seabees (from Construction Battalions) were recruited by the United States Navy during World War II. They were skilled   construction workers whose task was to assist in building naval bases in the theaters of war.  The first three Naval Construction Battalions were formed in March 1942 by Admiral Ben Moreell, under the command of the Civil Engineer Corps. Enlistment was voluntary until December 1942, when the Selective Service System became responsible for recruitment. Below, is an excerpt from wikipedia about Seabees during WWII, in italics:

During World War II the Seabees constructed over 400 advanced bases, in both the Atlantic and Pacific theaters. In the Atlantic their work helped to protect the Panama Canal and Atlantic convoys, and to support operations in North Africa, Sicily, and mainland Italy, and the D-Day landings and subsequently in Western Europe, especially the crossing of the Rhine. In the Pacific, where 80% of Seabees were deployed, they built advanced bases to defend the Aleutian Islands and to support American advances in the South Pacific – starting from the Society Islands – and in the Central Pacific, starting from the Gilberts, Marshalls, Carolines, and Marianas. The Pacific war often found the Seabees in close support of invasion forces, taking part in unloading supplies, and quickly constructing or restoring harbours, airstrips and other facilities on newly captured islands. Their role in such operations as the invasion of Okinawa was central in bringing the war to its close.

Mr. Criswell continues with stories of his life experience from growing up in Euclid, OH, two and half years of being a Seabee during WWII,  returning home from WWII on his father’s birthday, getting his college degree in Kent State University, and his life time of building: working 29 years at H.C. Buchanan Concrete Inc. and retired as the Vice President; former President of the Central Florida Builders Exchange; former President of West Orange Habitat for Humanity; and former President of the Rotary Club of Windermere, FL.

After he graduated from college, Mr. Criswell moved to Florida to be close to his parents to be of assistance. From everything I’ve gathered and observed, the secret to Bill Criswell’s success and his leadership position wherever he goes are: being steadfastly ready and prepared for any task, having a strong desire to serve and protect the country and men who he worked with, perseverance in completing any task he sets his mind to, being focused on the positives, and giving credits to those who work with him. Even though he stated that “I am a 20th century man living in the 21st century,” he has taken sufficient interest in our 21st century modern world to also think, “if I were a young man, I’d have wanted to work with robotics.” Again, his interest in building things continues to serve the central theme of his life, during or after WWII. Even after his retirement from 29 years of working at H.C. Buchanan Concrete Inc., he continued various building projects at Central Florida Builders Exchange, West Orange Habitat for Humanity, and The Rotary Club of Windermere. In recent decades, Bill Criswell had been the project chairman for “Home At Last”, a special project to honor and build homes for combat wounded, permanently disabled veterans of the Iraq-Afghanistan wars. Currently, Bill Criswell may no longer be the president, but he is still actively involved with projects at “Home At Last”. So, if  you are aware of any lot or property that may be suitable to build for “Home At Last”, please do not hesitate to contact Bill Criswell via email: wccriswell@earthlink.net , phone: 407-876-2472, or web site: www.HomeAtLastHomes.org . Below, Bill Criswell of Windermere on the topic of “Home At Last“.  Finally, Mr. Criswell spoke up for the VA Medical Center at Lake Nona, FL. This new Orlando VA Medical Center at Lake Nona, FL., is an 65 acre campus in southeastern Orange County. This 1.2 million square foot and $600 million facility apparently quite impressed Mr. Criswell. More about what Mr. Criswell said about the VA Medical Center at Lake Nona, FL., below: Mr. Criswell was married to his wife of 46 years, Helen Ann, and they have a daughter Holly (Criswell) Hansen and  two grand children, Stephen Hansen Jr. and Amanda Hansen. During his 56 years of residency in Windermere, FL., his involvement in various projects had brought much prosperity and harmony to veterans and residents in the community alike.

There is much we can all learn from this WWII veteran: his work ethics, planning ahead, perseverance, giving credits to those he worked with, and always having a sense of gratitude. These are the ingredients that have helped him to rise victorious from WWII, as well as from his battle with cancers.  Truly, we can honestly say that our community is a better place to have some one such as Bill Criswell in it.