Republican Senator Jeff Flake From Arizona Warning Us Before He Retires 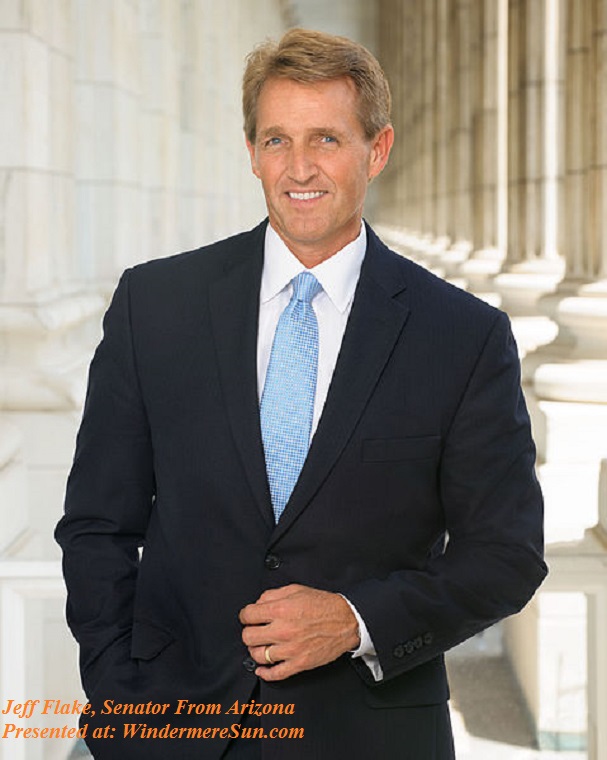 Jeff Lane Flake is a name worth remembering. He is an American politician serving as the junior United States Senator from Arizona since 2013. He is a member of the Republican Party and a conservative. Flake grew up on a cattle ranch in Snowflake, Arizona, with ten siblings. The town is in part named for his great-great grandfather William J. Flake, who co-founded the settlement in 1878; and Flake’s father, Dean, served as town mayor and as a pastor. Jeff Flake attended Brigham Young University (BYU), taking time off for Mormon mission to Zimbabwe and South Africa, where he learned to speak Afrikaans. He earned two degrees from BYU — a B.A. in International Relations in 1986 and a M.A. in Political Science in 1987 — and while there he also met Cheryl Bae, whom he married in 1985 and with whom he has five children.

Upon graduating from college, Flake worked briefing at a public relations firm in Washington, D.C., before returning to Africa to serve as executive director of the Foundation for Democracy in Namibia. In 1992, Flake returned to Arizona where he became executive director of the Goldwater Institute, a think tank and research organization that aims to promote the former Arizona senator’s ideals of limited government, personal responsibility, and expanded freedom. Flake was elected to the United States House of Representatives in 2000, where he would serve for 12 years. During his tenure, Flake earned a reputation as a budget hawk, serving as a member of the Committee on Appropriations and calling out colleagues for funneling cash toward earmarks. He also supported traditional conservative views with his opposition to same-sex marriage and abortion, but he also voted to repeal Don’t Ask Don’t Tell in the military and supported the DREAM Act (Development, Relief, and Education for Alien Minors) due in part to his childhood experiences with immigrant workers on his family’s ranch. After six terms in the House, Flake was elected to the United States Senate in 2012. He went on to serve in the Judiciary Committee, the Energy and Natural Resources Committee, the Special Committee on Aging, and the Foreign Relations Committee, becoming chair of various subcommittees. Flake was also one of the bi-partisan “Gang of Eight” that pushed through a Senate immigration-reform bill in 2013, and he has been a vocal critic of President Donald Trump. Flake announced on October 24, 2017 that he would not seek reelection in 2018.

Below, I would like to share with you Senator Flake’s words of wisdom and warnings to all of us Americans.

In reference to Trump: “To interfere the administration of justice….ordering an investigation to the investigation to defend himself….ordering an investigation is not a legitimate use of presidential power…..when you don’t even know what the limits of the presidential powers are, you might not even care when you are abusing that power…. global resurgence  of authoritarian impulse which has democracy teetering on the break….strongmen placing themselves above the law….in our own country, a leader who reveres some of the most loathsome enemies to our democracy in our time….”

Below, from his speech:

These questions have some of us wondering in the political wilderness. And it is in that wilderness that your wonderful letter of invitation reached me. Well, the wilderness suits me just fine. In fact, I so love the way Washington has become that in recent years, during Congressional recesses, I’ve taken to stranding myself on deserted islands in the middle of the ocean, just to detoxify all the feelings of love out of my system. I’m not kidding here. I once spent a week, alone, voluntarily marooned on a tiny island called Jobanwa, a remote spit of sand and coconut trees in the Central Pacific, about 7,000 miles from Washington. As penance and determined to test  my survival skill, I brought no food or water, relying solely on what I could catch or collect. That, turned out, was the easier part. More difficult was dealing with the stultifying loneliness that set in on that first night and never left me. By day 3, for companionship, I began to mark the hermit crab wondering through my camp with a number, just to see if they would reoccur. By the end of the week, I had 126 numbered friends. I still miss #72, he rarely left my side after developing an addiction for coconut scraps. I was less fond of #12 who bit or pinched my big toe. Now, I would not recommend such drastic measures to escape your own situation. But I hope that should you be presented with a choice, you too, would have eskewed comfort and set out into the wilderness rather than compromise your conscience. From my cautionary tale to you today, I urge you to challenge all of your assumptions regularly. Recognize the goods in your opponents. Apologize every now and then. Admit to mistakes. Forgive and ask for forgiveness. Listen more. Speak up more. Sometimes politics keep us silent when we should speak. And if you find yourself in a herd, crane your neck, look back there, check out your brand, ask yourself if it really suits you. I can say, from personal experience, it is never too late to leave the herd. When you peel off from the herd, your equilibrium returns; food tastes better; you sleep very well; your mind is your own again. You cease being captive to some bad impulses and even worse ideas. It can strain relationships, to be sure. It can leave you alone in the Senate dining room, every now and the. But that’s ok. To revise and extend a remark that the president himself may recognize, you might say that “I like people whose minds weren’t captured.” That one was for you, Senator McCain, “We’re all pulling for you!” Politically speaking, I have not changed much of my believes at all. But my goodness, how I’ve changed. How can you live through these abnormal times and not be changed? Our country needs us now.  Our country needs you. We need each other. And it is a scoundrel who would prosper politically by turning us against each other. For our time, let us send a message into the future that we did not fail democracy, but that we renewed it. That a patchwork of populist resentments and authoritarian whims that for a while succeeded in its cynical mission of discord had the ultimate effect of shaking us from our complacency, reminding us of who we are and what our responsibilities are to each other, reawakening us to our obligations as citizens. Let us be able to say in the future that we’ve faced these forces that would threaten our institutions and tear us apart. And that we said, “NO”. I leave you today with more good news than bad news. This time I’ll start with the bad news, which is, all of this is yours to fix. All of it! And of course, that is also the good news. All of this is yours to fix, and our country could not be more fortunate than to have people of your high character, strong principle, and often an awesome talent to soon take the helm. I grew up as a kid on the F bar ranch (cattle ranch) in rural Arizona. And if we needed to gage the condition of the range or measure the damage after a flood, we’d find the highest hill or butea and ride our horses to the top. From such a vista, we could dispatch cowboys to gather cattle, machinery to shore up roads, workers to repair fences, to restore some semblance of order. There are no tall buteas in Washington, but it is nonetheless our obligation to assess the conditions of our politics. Then to mitigate and repair the damage. This is the story of America, though. And we would be better for the hard lesson of this experience. We are a much better and more decent people than Washington shows us to be.  We are a deeply resourceful and resilient nation. And our greatness is based on no one man. No one man who alone can fix it, but rather on enduring ideas of self-governance and the rule of law that had been the model of the world for centuries. Ideas that can be mocked but not marred.  No there are no high buteas in Washington, but still, we must gain the high ground and survey the damage. And the thing about gaining the high ground is, from up there, you can see beyond the damage too. You can see every thing. Every thing that is good and decent. That is a job before us, to get through this, and beyond it. And you are just the ones to take us there. Thank you and congratulations to the Harvard Law Class of 2018.