Pet Iguana/Do All You Can To…. 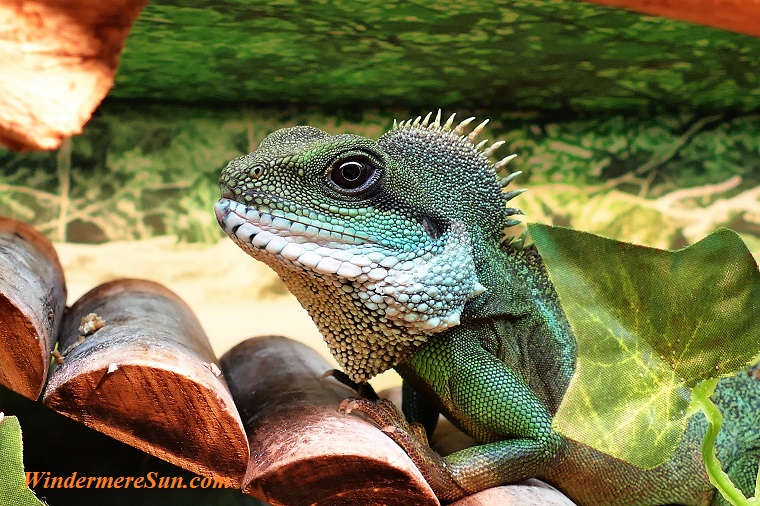 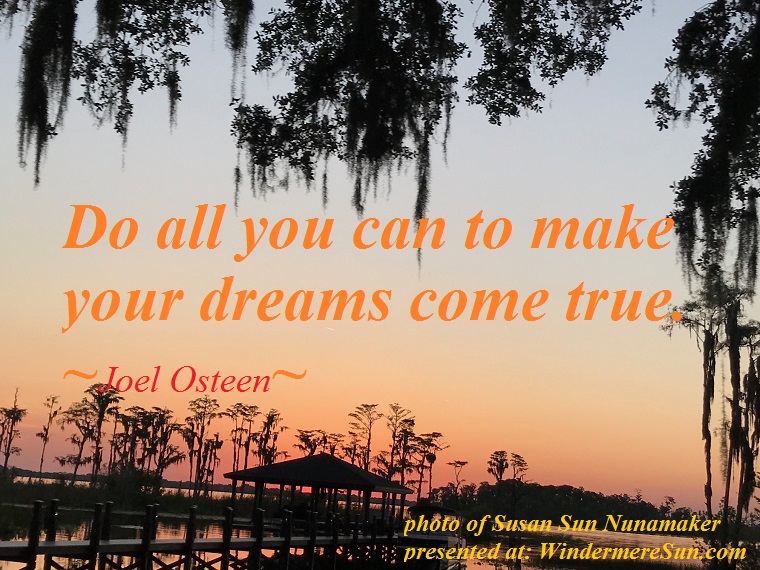 “Do all you can to make your dreams come true.” (quote of Joel Osteen, photo of Susan Sun Nunamaker, presented at: WindermereSun.com)

Yes, there are those who keep iguanas as pets.

Want to learn more about iguana? Excerpt from wikipedia, in italics, below:

The word “iguana” is derived from the original Taino name for the species, iwana.

In addition to the two species in the genus Iguana, several other related genera in the same family have common names of the species including the word “iguana”.

Iguanas can range from 1.5 to 1.8 metres (5 to 6 ft) in length, including their tail. The two species of lizard within the genus Iguana possess a dewlap, a row of spines running down their backs to their tails, and a tiny “third eye” on their heads. This light-sensing organ is known as the parietal eye, visible as a pale scale on the top of the head, and cannot make out details, just brightness. Behind their necks are small scales which resemble spokes, known as tuberculate scales. These scales may be a variety of colors and are not always visible from close distances. They have a large round scale on their cheeks known as a sub-tympanic shield.

Iguanas have keen vision and can see shapes, shadows, colors, and movement at long distances. Their visual acuity enables them to navigate through crowded forests and to locate food. They employ visual signals to communicate with other members of the same species.

The tympanum, the iguana’s eardrum, is located above the sub-tympanic shield (or “ear shield”) behind each eye. Iguanas are often hard to spot, as they tend to blend into their surroundings and their coloration enables them to hide from larger predators.

Like most reptiles, an iguana has a three-chambered heart with two atria, one ventricle, and two aortae with a systemic circulation.

Male iguanas, like other male examples of Squamata, have two hemipenes.

“Do all you can to make your dreams come true.” (quote of Joel Osteen, photo of Susan Sun Nunamaker, presented at: WindermereSun.com)

Joel Osteen once commented, “Do all you can to make your dreams come true.”

More about Joel Osteen, excerpt from wikipedia, in italics, below:

Joel Scott Osteen is an American televangelist based in Houston, Texas. Osteen’s televised sermons are seen by over 7 million viewers weekly and over 20 million monthly in over 100 countries. His sermons also broadcast 24 hours a day on Sirius XM Satellite Radio, Channel 128. Osteen has written seven New York Times Best Sellers.

Osteen’s father encouraged him to preach for many years, but he declined, preferring to work behind the scenes until January 17, 1999, when he accepted his father’s suggestion and he preached his first sermon. John Osteen died six days later of a heart attack. Two weeks after his father’s death, Osteen began preaching regularly and later that year was installed as the new senior pastor of Lakewood Church on October 3, 1999. Since then, Lakewood’s attendance has grown from 5,000 to 43,000.

Lakewood Church services are seen in over 100 countries. Osteen was selected by Barbara Walters as one of her 10 Most Fascinating People of 2006. Former presidential candidate John McCain has described Osteen as his favorite inspirational author. The Osteen family attended Easter breakfast hosted by President Barack Obama at the White House in 2010.