American Woman and Japanese Man Won the Boston Marathon in 2018 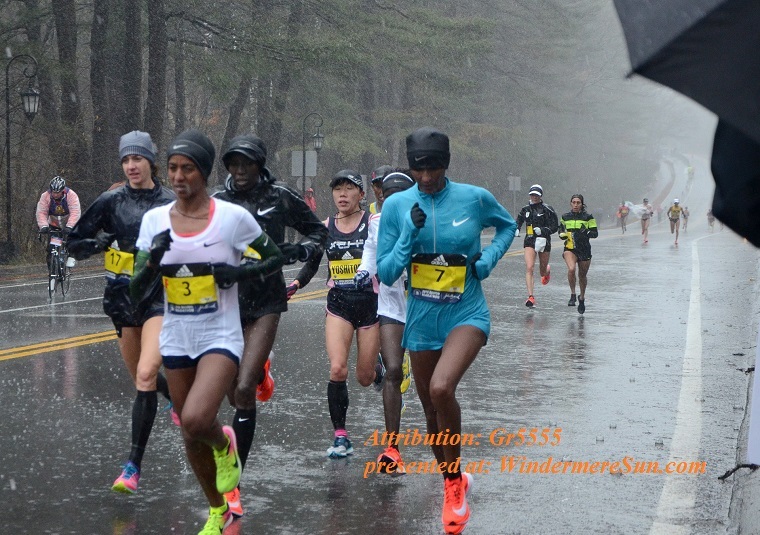 Boston Marathon 2018, during an especially hard down pour near halfway point (Attribution: Gr5555, Presented at: WindermereSun.com)

For the first time in 33 years, on Monday, April 16, 2018, an American woman Desiree Linden has come in first in the Boston Marathon women’s division, to run 26.2 miles through Boston. It was a nasty day, but Desiree Linden  pushed her way through the wind and cold rain and up Heartbreak Hill to complete her journey in 2:39:54 (2 hours, 39 minutes, and 54 seconds). Due to the poor weather condition on the day of the race, this is the slowest time for a winner in the women’s race since 1978, according to Associated Press. Desiree Linden is a 34-year old woman from Michigan. She came in second in the Boston Marathon 2011, at 2:22:38, just two seconds behind winner Caroline Kilel. She is also a twice Olympian,  Desiree “Desi” Nicole Linden is an American long-distance runner. She represented the United States in the 2012 London Olympics (dropped out due to a stress fracture shortly after starting the race) and the 2016 Rio de Janeiro Olympics women’s marathon. In 2018, she won the Boston Marathon, becoming the first American woman in 33 years to win the woman’s category in the event.


Boston Marathon 2018 men’s division was won by Yuki Kawauchi from Japan, with a time of 2:15:58. He is Japan’s first Boston Marathon winner since 1987. Boston Marathon was Yuki Kawauchi’s fourth marathon  and also his fourth win this year, according to New York Times. He told the Associated Press reporter that. “For me, these are the best conditions possible.”Yuki Kawauchi (川内優輝 Kawauchi Yūki, born 5 March 1987) is a Japanese marathon runner. He came to prominence after running the 2011 Tokyo Marathon in 2:08:37, finishing as the first Japanese and third overall. He is known as the “citizen runner” given that he works full-time for the government of Saitama Prefecture and trains in his time off with his own expenses without any sponsorship. Kawauchi is a frequent competitor, entering many races each year (averaging a marathon per month) ranging in distance from the 1500 m to the 50 km ultramarathon. Among his better performance are victories at the Boston Marathon, the Hokkaido Marathon and the Beppu-Ōita Marathon and top-three finishes at the Tokyo Marathon and Fukuoka Marathon (the two most important marathons in Japan). His personal best for the distance is 2:08:14 (Seoul 2013). In spite of being an amateur, he has represented Japan internationally at the World Championships in Athletics and the IAAF World Half Marathon Championships. He has two younger brothers, Yoshiki and Koki Kawauchi, who are also marathon runners
Gathered, written, and posted by Windermere Sun-Susan Sun Nunamaker
More about the community at www.WindermereSun.com