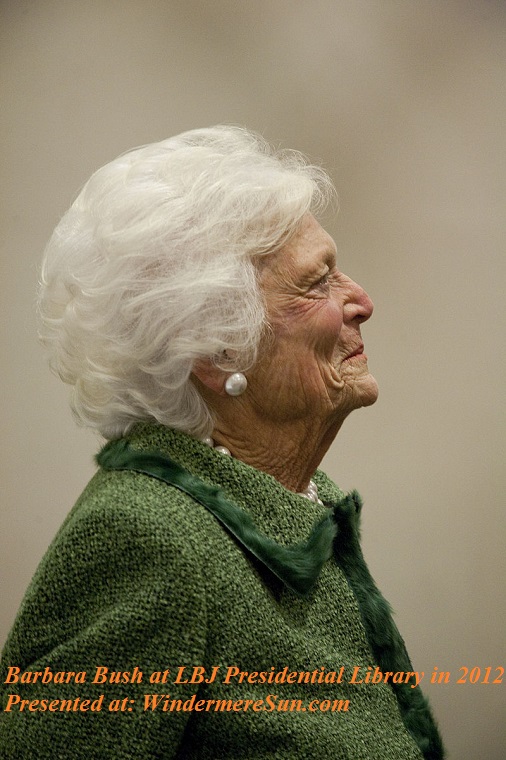 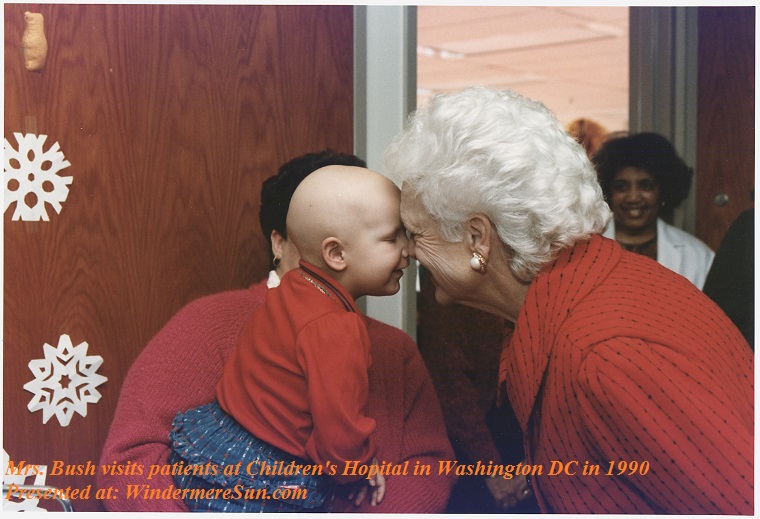 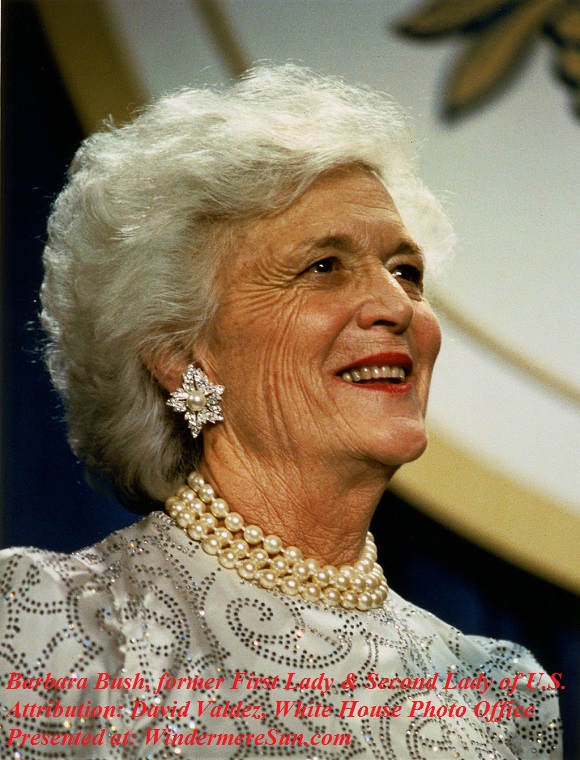 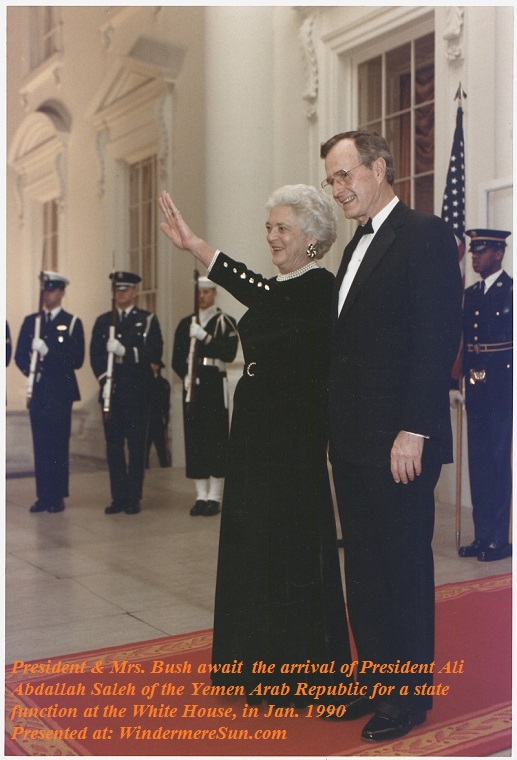 President and Mrs. Bush await the arrival of President Ali Abdallah Saleh of the Yemen Arab Republic for a state function at the White House in Jan., 1990 (presented at: WindermereSun.com) 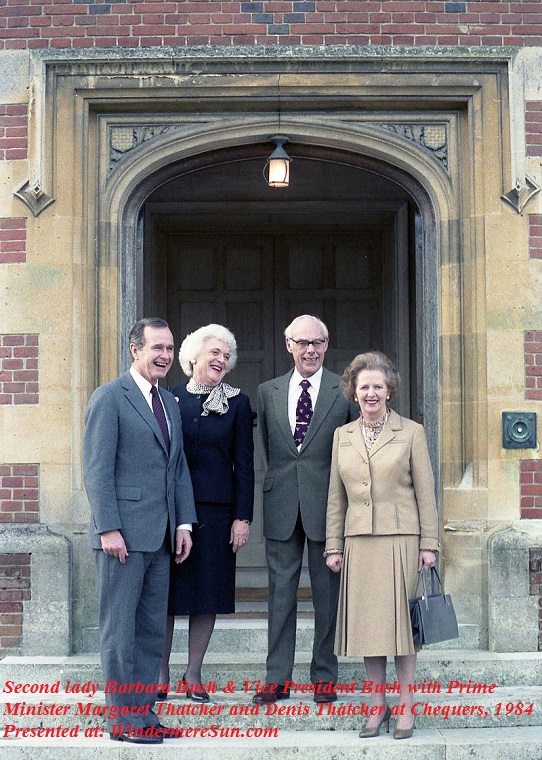 She was known to be the Enforcer of the Bush family, with her friendly and candid disposition and natural white hair.

Excerpt from wikipedia on Barbara Bush, in italics, below:

Barbara Bush was the daughter of Pauline (née Robinson) and Marvin Pierce, who later became president of McCall Corporation, the publisher of the popular women’s magazines Redbook and McCall’s. She grew up with two elder siblings—Martha and James—and a younger brother named Scott. Her ancestor Thomas Pierce Jr., an early New England colonist, was also an ancestor of Franklin Pierce, the 14th president of the United States. She is a fourth cousin, four times removed, of Franklin Pierce and Henry Wadsworth Longfellow.  Barbara Pierce was born in Manhattan. She graduated from Ashley Hall School in Charleston, South Carolina. She met George Herbert Walker Bush at age 16, and the two married in Rye, New York, in 1945, while he was on leave during his deployment as a Naval officer in World War II. They had six children together. The Bush family soon moved to Midland, Texas, where George Bush entered political life.

Barbara attended Rye Country Day School from 1931 to 1937 and later the boarding school Ashley Hall in Charleston, South Carolina, from 1940 to 1943. As a youth, she was athletic and enjoyed swimming, tennis, and bike riding. Her interest in reading began early in life; she recalled gathering and reading with her family during the evenings.

When Barbara was 16 and on Christmas vacation, she met George Bush at a dance; he was a student at Phillips Academy in Andover, Massachusetts. After 18 months, the two became engaged to be married, just before he went off to World War II as a Navy torpedo bomber pilot. He named three of his planes after her: Barbara, Barbara II, and Barbara III. When he returned on leave, she had dropped out of Smith College in Northampton, Massachusetts; two weeks later, on January 6, 1945, they were married at the First Presbyterian Church in Rye, New York, with the reception being held at The Apawamis Club.

For the first eight months of their marriage, the Bushes moved around the Eastern United States, to places including Michigan, Maryland, and Virginia, as George Bush’s Navy squadron training required his presence at bases in such states.

Over the next 13 years, George and Barbara Bush had six children, and, later, 14 grandchildren and seven great-grandchildren: The children are:

George Bush was elected as a U.S. Representative in Congress from Texas two years later, in 1966. Barbara raised her children while her husband campaigned and occasionally joined him on the trail. Over the ensuing years, George Bush was elected or appointed to several different positions in the U.S. Congress or the Executive branch, or government-related posts, and Barbara Bush accompanied him in each case.

The Bushes celebrate on the evening that George Bush was elected a congressman, Houston, 1966

As the wife of a Congressman, Barbara immersed herself in projects that piqued her interest; the projects included various charities and Republican women’s groups in Washington, D.C. Though her husband lost a second bid for the Senate in 1970, President Richard Nixon appointed him the United States Ambassador to the United Nations, which enabled Barbara to begin forming relationships in New York with prominent diplomats. As the Watergate scandal heated up in 1973, Nixon asked Bush to become Chairman of the Republican National Committee; Barbara advised her husband to reject the offer because of the harsh political climate, but he accepted anyway.

Nixon’s successor, Gerald R. Ford, appointed Bush head of the U.S. Liaison Office in the People’s Republic of China in 1974, and thus the Bushes moved internationally. She enjoyed the time that she spent in China and often rode bicycles with her husband to explore the cities and regions that few Americans had visited. Just three years later, Bush was recalled to the U.S. to serve as Director of Central Intelligence during a crucial time of legal uncertainty for the agency. George was not allowed to share pertinent classified aspects of his job with Barbara; the ensuing sense of isolation, coupled with her perception that she was not achieving her goals while other women of her time were, plunged her into a depression. She did not seek professional help and instead began delivering speeches and presentations about her time spent in the closed-off China and began volunteering at a hospice.

Barbara Bush defended her husband’s experience and personal qualities when he announced his candidacy for President of the United States in 1980. She caused a stir when she said that she supported ratification of the Equal Rights Amendment and was pro-choice on abortion, placing her at odds with the conservative wing of the Republican party, led by California Governor Ronald Reagan. Reagan earned the presidential nomination over her husband, who then accepted Reagan’s invitation to be his running mate; the team was elected in 1980.

Barbara Bush’s eight years as Second Lady allowed her to become a common household name. After her son Neil was diagnosed with dyslexia, she took an interest in literacy issues and began working with several different literacy organizations. She spent much time researching and learning about the factors that contributed to illiteracy – she believed homelessness was also connected to illiteracy – and the efforts underway to combat both. She traveled around the country and the world, either with the vice president on official trips or by herself. In 1984, she wrote a children’s book, C. Fred’s Story, which dealt about her family as told from the point of view of her dog, C. Fred.

She donated all proceeds from the book to literacy charities. By then comfortable speaking in front of groups, she routinely spoke to promote issues that she believed in, and she became famous for expressing a sense of humor and self-deprecating wit. During the 1984 presidential campaign, Barbara made headlines when she told the press that she could not say on television what she thought of vice presidential candidate Geraldine Ferraro, but “it rhymes with rich”. She later apologized to Ferraro.

In 1988, Vice President Bush announced his candidacy for President to succeed Reagan. By this time Barbara had experienced two presidential campaigns, but broke new ground by becoming the second candidate’s spouse to speak at the national party convention that nominated her husband (after Eleanor Roosevelt in 1940). She promised voters that she would be a traditional first lady and campaigned actively for her husband. The campaign at times focused on the large Bush family, and contrasted her with the First Lady, Nancy Reagan, by highlighting her interest in domestic staples such as church, gardening, and time spent with family while placing less emphasis on style sense and fashion; she drew attention to both her famous white hair and disinterest in wearing designer clothes. She generally avoided discussion of political issues during the campaign, particularly those on which she and her husband differed, and those closely involved with the campaign have reported that she was actively involved in campaign strategy. Bush was elected in November 1988 and sworn in on January 20, 1989.

Family literacy was Barbara Bush’s cause as First Lady, and she called it “the most important issue we have”. She became involved with many literacy organizations, served on literacy committees and chaired many reading organizations. Eventually, she helped develop the Barbara Bush Foundation for Family Literacy. She continues to be dedicated to eliminating the generational cycle of illiteracy in America by supporting programs where parents and their young children are able to learn together. During the early 1980s, after statistics had shown that foreign-born immigrants from Latin America had nearly quintupled just since 1960, statistics showed that 35 million adults could not read above the eighth-grade level and that 23 million were not able to read beyond a fourth-grade level. Mrs. Bush appeared on The Oprah Winfrey Show to discuss the situation and spoke regularly on Mrs. Bush’s Story Time, a national radio program that stressed the importance of reading aloud to children. Her children Jeb Bush and Doro Bush Koch serve as co-chairs of the Barbara Bush Foundation for Family Literacy. Mrs. Bush remained active in the foundation and served as honorary chair.
Barbara Pierce Bush was active in the White House Historical Association and worked to revitalize the White House Preservation Fund, which she renamed the White House Endowment Trust. The trust raises funds for the ongoing refurbishment and restoration of the White House. She met her goal of raising $25 million towards the endowment. The White House residence staff generally found Barbara Bush to be the friendliest and most easygoing of the First Ladies with whom they dealt.

In March 1989, Bush’s press office reported that she had Graves’ disease. In June of that year, President Bush said of his wife that “…she is doing just fine. And I think her doctors would say the same thing. She’s got this Grave’s disease under control.”

Bush was known for her affection for her pet English Springer Spaniel Millie and wrote a children’s book about Millie’s new litter of puppies. She even included Millie in her official white house portrait, painted by Candace Whittemore Lovely. Barbara Bush became the first U.S. First Lady to become a recipient of the Henry G. Freeman Jr. Pin Money Fund, receiving $36,000, most of which she gave to favorite charities.

She was struck every day by “how much things had changed” for her and her husband since they became President and First Lady. In place of a limousine, Bush tried to use a smaller car and travel by train and commercial aircraft for out-of-town trips. The heads of Bush’s Secret Service detail were partially opposed to her wishes; the agents agreed to the small car but did not approve of the commercial air and train travel. At that time, the number of threats to the First Lady was higher than that of the vice president. Bush still wanted to use public transportation despite the opposition of the Secret Service. She was put-off by the fact that her flights would be delayed while agents checked out the planes and luggage. The plane on which Bush traveled was nicknamed “Bright Star,” in honor of the leukemia foundation her husband and Hugh Liedtke founded after her daughter Robin died.

Her Wellesley College commencement address, given in 1990, was listed as #45 in American Rhetoric’s Top 100 Speeches of the 20th Century (listed by rank).