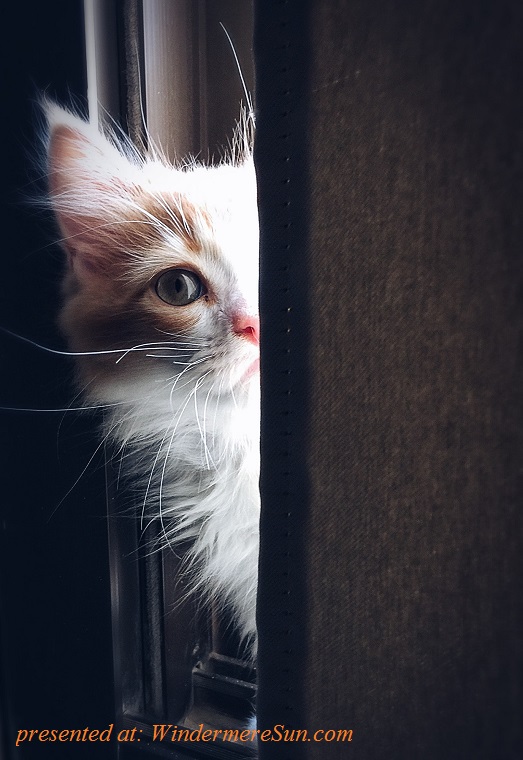 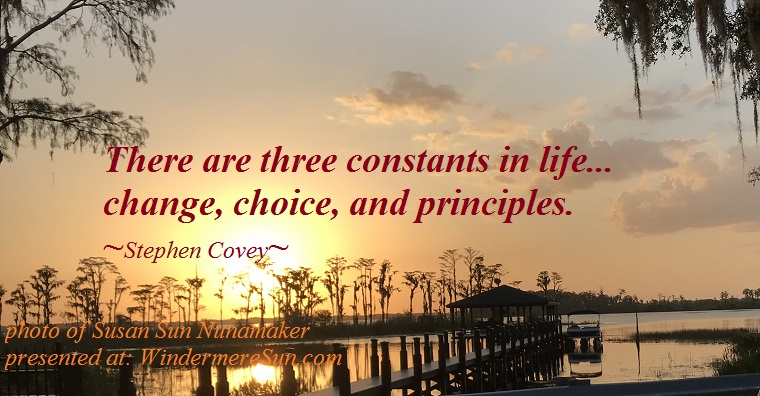 “There are three constants in life…change, choice, and principles.” (quote of Stephen Covey, photo of Susan Sun Nunamaker, presented at: WindermereSun.com)

Ever played Peek-a-boo with your cat?

In case you don’t know what peek-a-boo or peekaboo is, wikipedia will help to shed some light, below, in italics:

Peekaboo (also spelled peek-a-boo) is a form of play primarily played with an infant. To play, one player hides their face, pops back into the view of the other, and says Peekaboo!, sometimes followed by I see you! There are many variations: for example, where trees are involved, “Hiding behind that tree!” is sometimes added. Another variation involves saying “Where’s the baby?” while the face is covered and “There’s the baby!” when uncovering the face.

Peekaboo uses the fundamental structure of all good jokes—surprise, balanced with expectation.

“There are three constants in life…change, choice, and principles.” (quote of Stephen Covey, photo of Susan Sun Nunamaker, presented at: WindermereSun.com)

Stephen Covey once commented, “There are three constants in life…change, choice, and principles.”

Do you agree with Stephen Covey? Or are you still standing by Benjamin Franklin’s or Daniel Defoe’s or Christopher Bullock’s…

Our new Constitution is now established, and has an appearance that promises permanency; but in this world nothing can be said to be certain, except death and taxes.

— Benjamin Franklin, in a letter to Jean-Baptiste Leroy, 1789

However, Franklin’s letter is not the origin of the phrase, which appeared earlier in Daniel Defoe’s The Political History of the Devil.

Things as certain as death and taxes, can be more firmly believ’d.

— Daniel Defoe, The Political History of the Devil, 1726.

And in The Cobbler of Preston by Christopher Bullock (1716)

“‘Tis impossible to be sure of any thing but Death and Taxes,

Now, few words on Stephen Covey, excerpt from wikipedia, in italics, below:

Stephen Richards Covey (October 24, 1932 – July 16, 2012) was an American educator, author, businessman, and keynote speaker. His most popular book is The 7 Habits of Highly Effective People. His other books include First Things First, Principle-Centered Leadership, The 7 Habits of Highly Effective Families, The 8th Habit, and The Leader In Me — How Schools and Parents Around the World Are Inspiring Greatness, One Child at a Time. He was a professor at the Jon M. Huntsman School of Business at Utah State University at the time of his death.