Craigslist Pulled Its Personals Section In Fear of SESTA-FOSTA 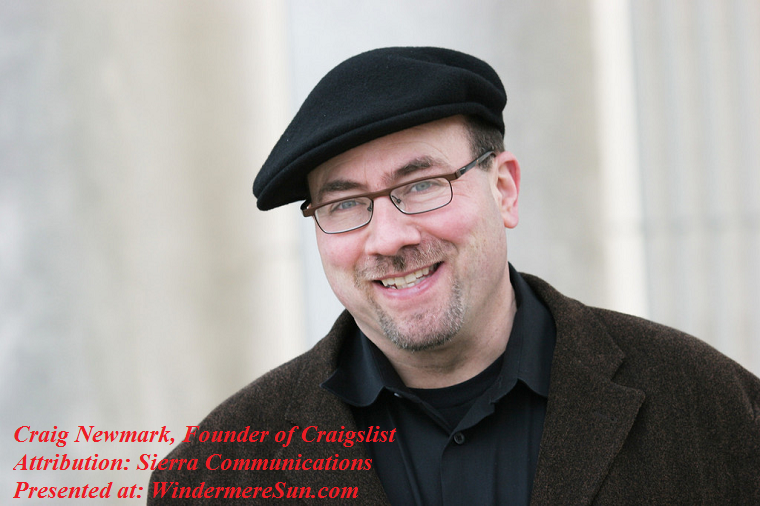 This is a post to explain why Windermere Sun has turned down so many requests/orders for personal ads in WindermereSun.com .

How many of you out there have ever used Craigslist? It is an American classified advertisements website with sections devoted to jobs, housing, for sale, items wanted, services, community, gigs, résumés, and discussion forums. The Craigslist founder Craig Newmark began the service in 1995 as an email distribution list to friends, featuring local events in the San Francisco Bay Area. It became a web-based service in 1996 and expanded into other classified categories. It started expanding to other U.S. cities in 2000, now covering 70 countries.  In March 2008, Spanish, French, Italian, German, and Portuguese became the first non-English languages Craigslist supported. As of August 9, 2012, over 700 cities and areas in 70 countries have Craigslist sites. Some Craigslist sites cover large regions instead of individual metropolitan areas—for example, the U.S. states of Delaware and Wyoming, the Colorado Western Slope, the California Gold Country, and the Upper Peninsula of Michigan are among the locations with their own Craigslist sites.

During the past 22 years, Craigslist has helped many people in finding their jobs, bikes, boats, clothes, furnitures, dog walkers, etc. But in recent years, there had been several cases where few people misused or abused  the Craigslist’s personals section, leading to victimization of some of the Craigslist users and subsequently the passing of HR 1865, “FOSTA” by U.S. Congress. Now Craigslist is concerned of being held liable for activities by some of the users of the Craigslist platform, and therefore has removed its personal section. This newly passed bill allows any third party website to be held liable for what their users do in regards to solicitation or sex trafficking. Reddit has also changed some of it’s rules regarding commerce as a result of this bill. This is Craigslist’s response to HR 1865, “FOSTA”, below, in italics:

Any tool or service can be misused. We can’t take such risk without jeopardizing all our other services, so we are regretfully taking craigslist personals offline. Hopefully we can bring them back some day.

To the millions of spouses, partners, and couples who met through craigslist, we wish you every happiness!

Unfortunately, the lawmakers did not fact-check the bill’s claims, nor did they listen to their constituents. The Senate has passed the Stop Enabling Sex Traffickers Act, or SESTA, and tacked-on FOSTA (Allow States and Victims to Fight Online Sex Trafficking Act), by a vote of 97–2.  Department of Justice, ACLU, EFF, and many other significant organizations have objected to the bill both publicly and in letters to elected officials, unearthing the bill’s many alarming legal, constitutional , and human rights infringements. The bill removed protection for websites under Section 230 of the Communications Decency Act, and makes sites and services liable for hosting what’s very loosely defined as sex trafficking and prostitution content. Furthermore, FOSTA-SESTA equates sex work and sex trafficking as the same thing, and making discussion and advertising part of the crime. Such blurry interpretation of sex and commerce and conflation of sex trafficking and sex works is incredulous.   The SESTA-FOSTA undercuts a provision that protects websites from liability for their users’ free speech.

In the video of Lionel Nation above, Lionel pointed out, in italics, below:

….the Stop Enabling Sex Traffickers Act (SESTA, S. 1693) wouldn’t help punish sex traffickers. What the bill would do (PDF) is expose any person, organization, platform, or business that hosts third-party content on the Internet to the risk of overwhelming criminal and civil liability if sex traffickers use their services. For small Internet businesses, that could be fatal: with the possibility of devastating litigation costs hanging over their heads, we think that many entrepreneurs and investors will be deterred from building new businesses online.
Fundamentally, holding these website platforms liable is equivalent to requiring the hotels to be liable for any of the hotel guests’ activities, be it prostitution or otherwise. It is widely believed that SESTA-FOSTA is part of the encroachment upon First Amendment-Freedom of Speech. As indicated earlier in this post, Department of Justice, Office of Assistant Attorney General, Stephen E. Boyd voiced his concern regarding this bill/law in his letter to Chairman of the Committee on the Judiciary,  Robert W. Goodlatte (please click HERE to view the letter). ACLU (American Civil Liberty Union) also composed a letter delivered back in November of 2017, voicing its opposition to SESTA, (please click HERE to view the letter), excerpt in italics, below:

We are concerned that the bill would significantly chill the explosion of online political, artistic, and commercial speech without improving the plight of sex trafficking victims. While it doesn’t ultimately address those concerns, the Manager’s Amendment makes important improvements to the bill.

In March of 2018, Senator Ron Wyden has proposed two amendments to H.R. 1865, one would provide some protections to online platforms engaged in moderating their sites (the “Wyden Amendment“). The Wyden Amendment means that these providers do not have to police their sites perfectly. While ACLU continues to oppose the underlying bill as a whole, ACLU recommended a vote in favor of the Wyden Amendment as a positive step in offering some protection to responsible online platforms and lessening the possible impacts on the scope and diversity of access to online content.

Much remains to be seen. Drop a call/text/email with your respective Congress-person if you’re concerned.