The Mill pub where Sergei Kripal was at the day he was poisoned (Attribution: Sebastian Ballard, Presented at: WindermereSun.com) 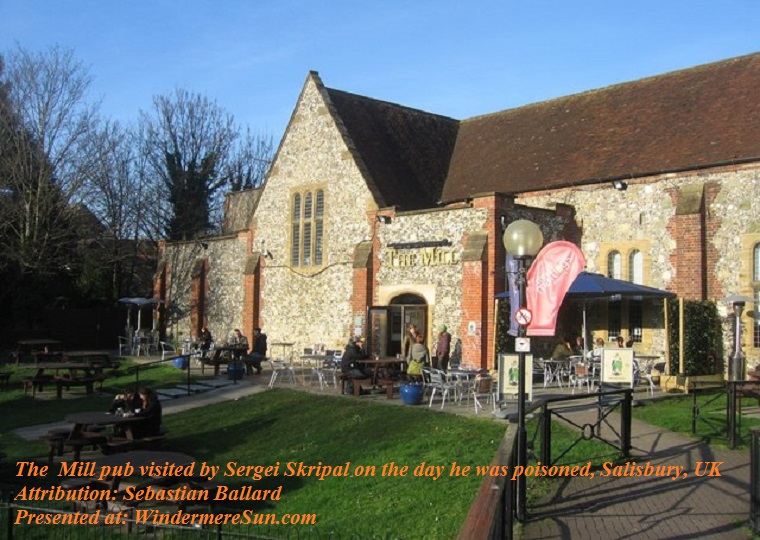 The Mill pub visited by Sergei Kripal on the day he was poisoned, Salisbury, UK (Attribution: Sebastian Ballard, Presented at: WindermereSun.com)

On 4 March 2018, former Russian military intelligence officer and British spy Sergei Skripal and his daughter Yulia were poisoned in Salisbury, England, with a chemical determined by the Government of the United Kingdom to be a Novichok nerve agent. As of  March 23, 2018, the pair remain critically ill at Salisbury District Hospital, and an investigating police officer was also seriously ill but was released on  March 22, 2018. So far, 38 people have been identified by UK intelligence officials as having been affected by the nerve agent. In the 1990s, Sergei Skripal was an officer for Russia’s Main Intelligence Directorate (GRU) and worked as a double agent for the UK’s Secret Intelligence Service from 1995 until his arrest in Moscow in December 2004. In 2006, he was convicted of treason and sentenced to 13 years in a penal colony. He settled in the UK in 2010 following the Illegals Program spy swap. Yulia Skripal is a Russian citizen visiting her father from Moscow, and Sergei is a British citizen.

On March 14, 2018, the British government accused the Russian Federation of attempted murder and announced punitive measures against Russia. The UK received support from the United States and other allies. Russia denied the accusations. The U.S., the EU and a number of individual EU countries also took punitive measures against Russia. On March 26, 2018, the Trump administration ordered the expulsion of 60 Russian diplomatic offices, and the closure of the Russian consulate in Seattle. A further 33 diplomats were expelled from a further 21 countries in a coordinated diplomatic response. (source: Wikipedia, in italics, above.)


Theresa May, Prime Minister of UK, accused Moscow of “an indiscriminate and reckless act against the United Kingdom”, giving the Kremlin until the end of tomorrow to provide full details of its Novichock nerve gas programme, or face the consequences. Russia has dismissed it all as a “circus show”, below:
Western democracy has responded to the poisoning of former British spies with military grade nerve agent in UK: the largest collective expulsion EVER of more than 100 Russian diplomats  by over 20  countries, (including U.S., UK, France, Germany, Poland, Lithuania, Australia, etc.),  Russia denied any association in the attack on Sergei Skripal and his daughter Yulia in Salisbury, UK, and  stated that there will be symmetric retaliation from Russia. EU leaders agreed that it was highly likely Russia was behind this nerve agent poisoning.  Reaction from Russian news network, Vesti News, below:
UK expelled 23 Russian diplomats last week and U.S. has expelled 60 Russian intelligence officers. Overall, there are over 20 countries showing solidarity in expelling Russian diplomats or intelligence officers. This solidarity of united front by the West surely was neither expected nor hoped for by Putin.
Gathered, written, and posted by Windermere Sun-Susan Sun Nunamaker
More about the community at www.WindermereSun.com