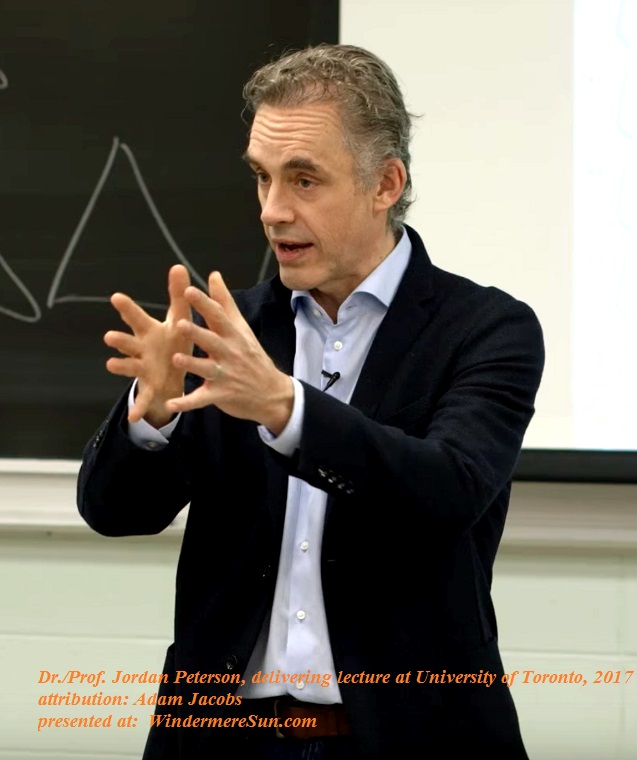 “Tell the truth and let the chip falls where it may!” stated Jordan Bernt Peterson, a Canadian  clinical psychologist, cultural critic, and professor of psychology at the University of Toronto. His main areas of study are in abnormal, social, and personality psychology, with a particular interest in the psychology of religious and ideological belief, and the assessment and improvement of personality and performance.  For those of us who are interested in transformative experience or learning, it’s a good idea to listen to what Jordan Peterson has to share with us.  His 12 Rules For Life: An Antidote To Chaos, listed below and explained in the video  in the end of the post:

Peterson teaches us how to maintain the balance of life and reach harmony among tragedy, vulnerability, and find the sustaining core that is noble and powerful.

Peterson studied at the University of Alberta and McGill University. He remained at McGill as a post-doctoral fellow from 1991 to 1993 before moving to Harvard University, where he was an assistant and an associate professor in the psychology department. In 1998, he moved back in Canada to the University of Toronto as a full professor.  His first book Maps of Meaning: The Architecture of Belief was published in 1999, a work which examined several academic fields to describe the structure of systems of beliefs and myths, their role in the regulation of emotion, creation of meaning, and motivation for genocide. His second book, 12 Rules for Life: An Antidote to Chaos, was released in January 2018.

In 2016, Peterson released a series of videos on his YouTube channel in which he criticized political correctness and the Canadian government’s Bill C-16. He subsequently received significant media coverage.

Personally, I believe listening to series of lectures by Dr./Prof. Jordan Peterson would do a great deal of good for any teens, college or non-college students, and any adults, for his focus may be summarized in two words, individual responsibility. I’ve selected some of these lectures for  your viewing pleasure, below:

His Books, summarized in wikipedia, in italics, below:

Maps of Meaning: The Architecture of Belief

Main article: Maps of Meaning: The Architecture of Belief
Something we cannot see protects us from something we do not understand. The thing we cannot see is culture, in its intrapsychic or internal manifestation. The thing we do not understand is the chaos that gave rise to culture. If the structure of culture is disrupted, unwittingly, chaos returns. We will do anything – anything – to defend ourselves against that return.

In 1999, Routledge published Maps of Meaning: The Architecture of Belief. The book, which took Peterson 13 years to complete, describes a comprehensive theory about how people construct meaning, beliefs and make narratives using ideas from various fields including mythology, religion, literature, philosophy and psychology in accordance to the modern scientific understanding of how the brain functions.

According to Peterson, his main goal was to examine why both individuals and groups participate in social conflict, explore the reasoning and motivation individuals take to support their belief systems (i.e. ideological identification) that eventually results in killing and pathological atrocities like the Gulag, the Auschwitz concentration camp and the Rwandan genocide. He considers that an “analysis of the world’s religious ideas might allow us to describe our essential morality and eventually develop a universal system of morality”.

12 Rules for Life: An Antidote to Chaos

Main article: 12 Rules for Life: An Antidote to Chaos


In January 2018, Penguin Random House published Peterson’s second book, 12 Rules for Life: An Antidote to Chaos. The work contains abstract ethical principles about life, in a more accessible style than Maps of Meaning. To promote the book, Peterson went on a world tour. As part of the tour, Peterson was interviewed by Cathy Newman on Channel 4 News. In a short time the interview received considerable attention and over seven million views on YouTube. The book was ranked the number one bestselling book on Amazon in the United States and Canada and number four in the United Kingdom. It also topped bestselling lists in Canada, US and the United Kingdom.

In 2013, Peterson began recording his lectures (“Personality and Its Transformations”, “Maps of Meaning: The Architecture of Belief”) and uploading them to YouTube. His YouTube channel has gathered more than 800,000 subscribers and his videos have received more than 35 million views as of January 2018. In January 2017, he hired a production team to film his psychology lectures at the University of Toronto. He used funds received via the crowd-sourced funding website Patreon after he became embroiled in the Bill C-16 controversy in September 2016. His funding through Patreon has increased from $1,000 per month in August 2016 to $14,000 by January 2017 to more than $50,000 by July 2017.

Peterson has appeared on The Joe Rogan Experience, The Gavin McInnes Show, Steven Crowder‘s Louder with Crowder, Dave Rubin‘s The Rubin Report, Stefan Molyneux‘s Freedomain Radio, h3h3Productions‘s H3 Podcast, Sam Harris‘s Waking Up podcast, Gad Saad‘s The Saad Truth series and other online shows. In December 2016, Peterson started his own podcast, The Jordan B. Peterson Podcast, which has 39 episodes as of February 20, 2018, including academic guests such as Camille Paglia, Martin Daly, and James W. Pennebaker, while on his channel he has also interviewed Stephen Hicks, Richard J. Haier, and Jonathan Haidt among others. Peterson supported engineer James Damore in his action against Google

In May 2017, Peterson began The Psychological Significance of the Biblical stories, a series of live theatre lectures, also published as podcasts, in which he analyzes archetypal narratives in Genesis as patterns of behavior vital for personal, social and cultural stability.

Peterson and his colleagues Robert O. Pihl, Daniel Higgins, and Michaela Schippers produced a writing therapy program with series of online writing exercises, titled the Self Authoring Suite. It includes the Past Authoring Program, a guided autobiography; two Present Authoring Programs, which allow the participant to analyze their personality faults and virtues in terms of the Big Five personality model; and the Future Authoring Program, which guides participants through the process of planning their desired futures. The latter program was used with McGill University undergraduates on academic probation to improve their grades, as well since 2011 at Rotterdam School of Management, Erasmus University. The Self Authoring Programs were developed partially from research by James W. Pennebaker at the University of Texas at Austin and Gary Latham at the Rotman School of Management of the University of Toronto. Pennebaker demonstrated that writing about traumatic or uncertain events and situations improved mental and physical health, while Latham demonstrated that personal planning exercises help make people more productive.  According to Peterson, more than 10,000 students have used the program as of January 2017, with drop-out rates decreasing by 25% and GPAs rising by 20%.