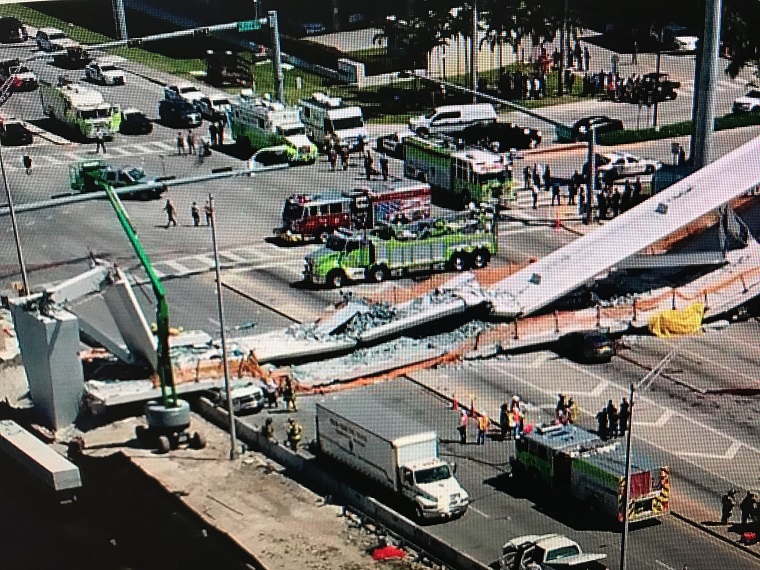 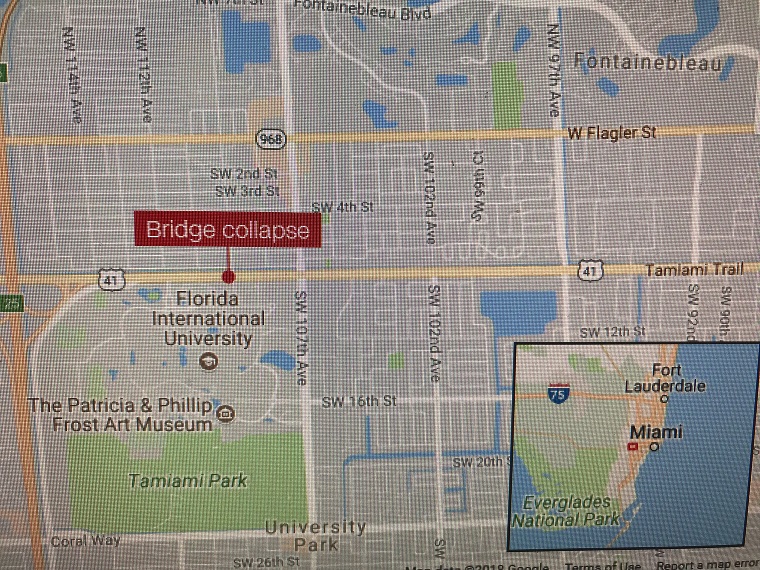 map where the pedestrian bridge collapsed (presented at: WinderemreSun.com)


A new pedestrian bridge, originally thought to be cable-stayed (later was discovered to be truss-bridge, with ornamental cables), 174-feet long and 950 tons design not yet completed nor open to the public, collapsed shortly before 4:00 pm, on Thursday, March 15, 2018. It was supposedly designed to withstand category 5 hurricane, but collapsed onto a highway at Florida International University in Miami, crushing eight vehicles under massive slabs and killing and injuring 2-8 people, according to authority. The TRT (Technical Rescue Team) and Urban Search and Rescue Team of FEMA have been working on the bridge to find viable victims. Authority announced that they wish the public to avoid SW 8th Street between SW 107 Ave. and SW 117 Ave. indefinitely. More than 100 firemen and policemen are currently working at this site. A team from the National Transportation Safety Board, composed of 15 investigators, is on its way to Miami to begin an inquiry into the collapse of this pedestrian bridge.

Be sure to avoid this area in your travel, if you are in Miami, Florida:

map where the pedestrian bridge collapsed (presented at: WinderemreSun.com)

From the video above, one finds that this bridge was constructed under accelerated bridge construction put together in a matter of few hours, seen in video below:


It is fortunate that this occurred during Spring break rather than during normal school session.

The trauma medical director of Kendall Regional Medical Center, Dr. Mark G. McKenney, said his staff received 10 patients, including two under critical condition (one of which arrived in coma with severe extremity injuries.)  Florida Governor Rick Scott will be on campus this evening to speak with local law enforcement and university officials.

According to FIU’s website of facts regarding this bridge, it is costing $14.2 million to build and was funded as part of a $19.4 million grant from the US Department of Transportation. It was designed to withstand the strength of a Category 5 hurricane,  and was supposed to last for more than 100 years. The bridge was still under construction when it collapsed.
Many factors may contribute to the collapse:  insufficient reinforcement for the concrete, insufficient curing time of the concrete, pylon (tower from which cables support the bridge deck) needs to be in place sooner, miscalculation in how much additional support is needed before the pylon and cables are in place, etc. We will have to wait for the report from National Transportation Safety Board to find out the cause of the collapse. (But later these cables were found to be for esthetic reason with no functioning purpose because it is of a truss bridge design with ornamental cables rather than a cable-stayed design with functioning purpose cables.)
To better understand cable-stayed bridge design, let’s take a look at an excerpt from wikipedia, in italics, below:

A cable-stayed bridge has one or more towers (or pylons), from which cables support the bridge deck. A distinctive feature are the cables which run directly from the tower to the deck, normally forming a fan-like pattern or a series of parallel lines. This is in contrast to the modern suspension bridge, where the cables supporting the deck are suspended vertically from the main cable, anchored at both ends of the bridge and running between the towers. The cable-stayed bridge is optimal for spans longer than cantilever bridges and shorter than suspension bridges. This is the range where cantilever bridges would rapidly grow heavier if the span were lengthened, while suspension bridge cabling would not be more economical if the span were shortened.

Cable-stayed bridges have been known since the 16th century and used widely since the 19th. Early examples often combined features from both the cable-stayed and suspension designs, including the famous Brooklyn Bridge. The design fell from favor through the 20th century as larger gaps were bridged using pure suspension designs, and shorter ones using various systems built of reinforced concrete. It once again rose to prominence in the later 20th century when the combination of new materials, larger construction machinery, and the need to replace older bridges all lowered the relative price of these designs.

There are four major classes of rigging on cable-stayed bridges: mono, harp, fan, and star.

There are also four arrangements for support columns: single, double, portal and A-shaped.

Depending on the design, the columns may be vertical or angled or curved relative to the bridge deck.

Cable-stayed bridges may appear to be similar to suspension bridges, but in fact, they are quite different in principle and in their construction.
In suspension bridges, large main cables (normally two) hang between the towers and are anchored at each end to the ground. This can be difficult to implement when ground conditions are poor. The main cables, which are free to move on bearings in the towers, bear the load of the bridge deck. Before the deck is installed, the cables are under tension from their own weight. Along the main cables smaller cables or rods connect to the bridge deck, which is lifted in sections. As this is done, the tension in the cables increases, as it does with the live load of traffic crossing the bridge. The tension on the main cables is transferred to the ground at the anchorages and by downwards tug on the towers.

Key advantages of the cable-stayed form are as follows: 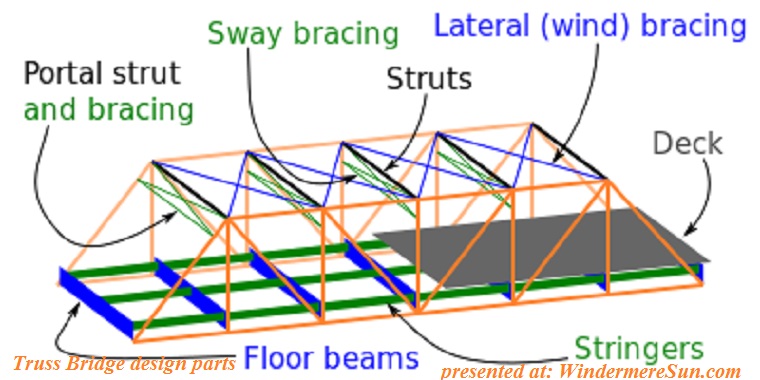 A truss bridge is a bridge whose load-bearing superstructure is composed of a truss, a structure of connected elements usually forming triangular units. The connected elements (typically straight) may be stressed from tension, compression, or sometimes both in response to dynamic loads. Truss bridges are one of the oldest types of modern bridges. The basic types of truss bridges shown in this article have simple designs which could be easily analyzed by 19th- and early 20th-century engineers. A truss bridge is economical to construct because it uses materials efficiently.

The nature of a truss allows the analysis of the structure using a few assumptions and the application of Newton’s laws of motion according to the branch of physics known as statics. For purposes of analysis, trusses are assumed to be pin jointed where the straight components meet. This assumption means that members of the truss (chords, verticals and diagonals) will act only in tension or compression. A more complex analysis is required where rigid joints impose significant bending loads upon the elements, as in a Vierendeel truss.

In the bridge illustrated in the infobox at the top, vertical members are in tension, lower horizontal members in tension, shear, and bending, outer diagonal and top members are in compression, while the inner diagonals are in tension. The central vertical member stabilizes the upper compression member, preventing it from buckling. If the top member is sufficiently stiff then this vertical element may be eliminated. If the lower chord (a horizontal member of a truss) is sufficiently resistant to bending and shear, the outer vertical elements may be eliminated, but with additional strength added to other members in compensation. The ability to distribute the forces in various ways has led to a large variety of truss bridge types. Some types may be more advantageous when wood is employed for compression elements while other types may be easier to erect in particular site conditions, or when the balance between labor, machinery and material costs have certain favorable proportions.

The inclusion of the elements shown is largely an engineering decision based upon economics, being a balance between the costs of raw materials, off-site fabrication, component transportation, on-site erection, the availability of machinery and the cost of labor. In other cases the appearance of the structure may take on greater importance and so influence the design decisions beyond mere matters of economics. Modern materials such as prestressed concrete and fabrication methods, such as automated welding, and the changing price of steel relative to that of labor have significantly influenced the design of modern bridges.

The design of this bridge will be under greater scrutiny than the construction of the bridge. I am surprised/shocked to find out that the design of this bridge is not cable-stayed design (according to the video below, it is actually a truss bridge design and all of the cables in the design are simply decorative)! Furthermore, in truss design bridges, the truss member is usually made out of steel with adjustable cables or steel rods on the inside whereas at FIU bridge, it is made out of concrete. Another important point to note: without sufficient supportive falsework, it was not safe for vehicles and people to be under that bridge before completion of the project. More will be recovered, analyzed, and reported.
You may also be interested in these articles below: