“Never Again” Movement Is Sweeping Through The Country 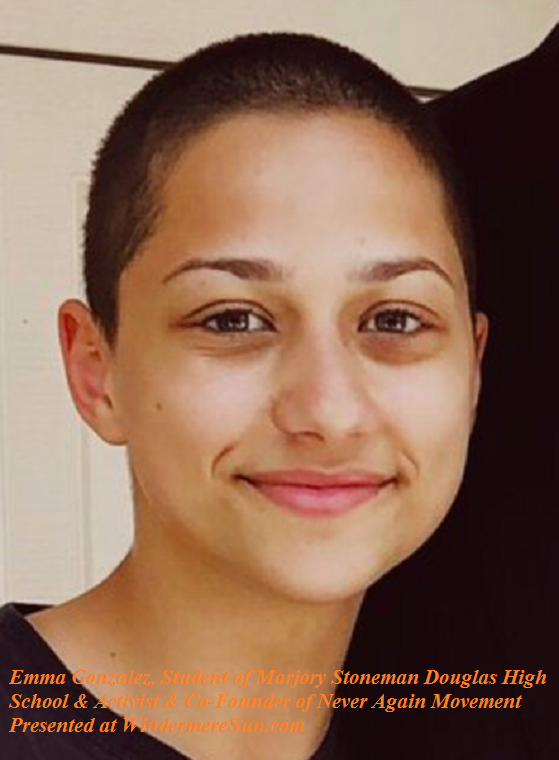 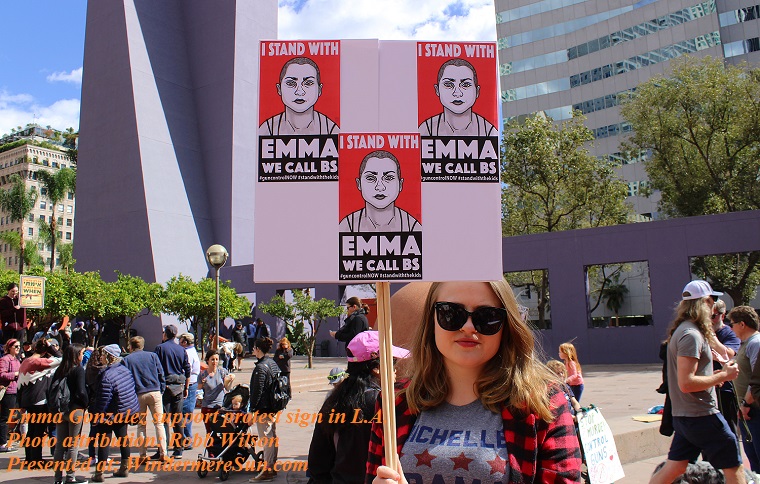 During this time of turbulence and changes, it is important to maintain our faith and keep our eyes on the future. We Floridians should be very proud of our young people for their initiative, courage, and ability to organize. In particular, we need to be aware and proud of approximately twenty students who have founded the movement called Never Again. Among its most prominent members are Cameron Kasky, Emma González, and David Hogg.

(The only student whose photo is under public domain is that of Emma Gonzalez. I would have liked to post photo(s) of all twenty students who have founded the Never Again movement.)

Below, excerpt from wikipedia on the topic of Never Again movement, in italics:

Never Again MSD (MSD refers to Marjory Stoneman Douglas High School) is an American student-led gun control organization that advocates for tighter regulations to prevent gun violence. The group, also known by the hashtag #NeverAgain, was formed in the aftermath of the shooting at Stoneman Douglas High School in Parkland, Florida, in which 17 people were murdered by a shooter armed with an AR-15 style semi-automatic rifle. The group started on social media as a movement “For survivors of the Stoneman Douglas Shooting, by survivors of the Stoneman Douglas Shooting” using the hashtag #NeverAgain. The group has staged protests demanding legislative action to be taken to prevent similar shootings in the future and has vocally condemned U.S. lawmakers who have received political contributions from the National Rifle Association (NRA).

The group was formed by Cameron Kasky and his school friends in the first four days after the shooting. The initial three co-founders were Kasky, Alex Wind, and Sofie Whitney. On February 15, 2018, one day after the massacre, Kasky met with Wind at a candlelight vigil. Wind stated, “The day after the shooting, we said something needs to happen; there needs to be a central space; there needs to be a movement.” After the vigil, Kasky invited Wind and Whitney to his house. Kasky came up with the name “Never Again” while the group stayed up through the night to make plans, and he posted “Stay alert. #NeverAgain” to Facebook.

Over the next three days, the group gained over 35,000 followers on Facebook. On February 17, 2018 Kasky recruited Parkland students David Hogg, Emma González, and Delaney Tarr at a gun-control rally in Fort Lauderdale, Florida where they spoke; other students quickly joined. The students gave as many interviews as they could to television networks. The group said they worked quickly to take advantage of the national media attention given to the shooting and its aftermath. Numerous Parkland students have been shown in media coverage. By the next day, the group had created Twitter accounts and announced a nationwide protest, scheduled to take place on March 24, 2018.

Please feel free to view this interview with David Hogg (L) and Cameron Kasky (R) with Bill Maher, below:

Emma Gonzalez, a student at the Marjory Stoneman Douglas High School of Parkland, Florida, where 17 people were left dead after a mass shooting, calls out President Trump and the NRA by name at an anti-gun rally in Fort Lauderdale, Florida. Emma Gonzalez, Cameron Kasky, and Jaclyn Corin talked with Ellen about their experience during the Marjory Stoneman Douglas High School shooting, and their activism in the days following the horrific event, below: You may also be interested in these articles, below: