Swimming Siberian Husky Puppy/Tell Me and I Forget…. 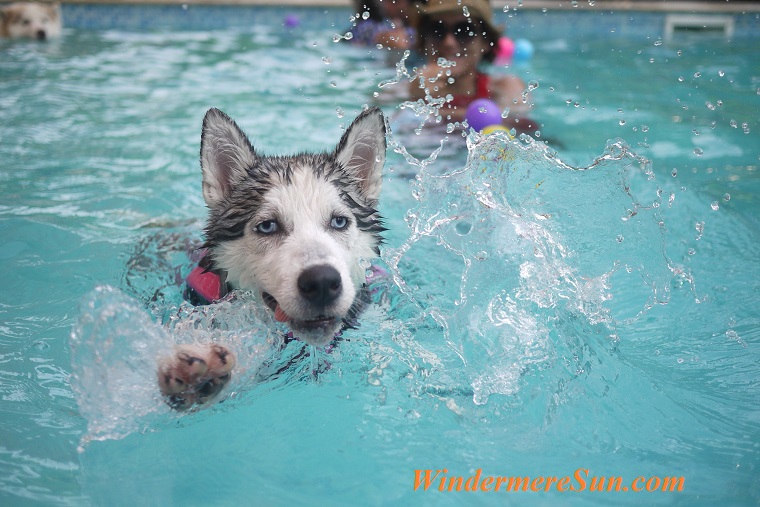 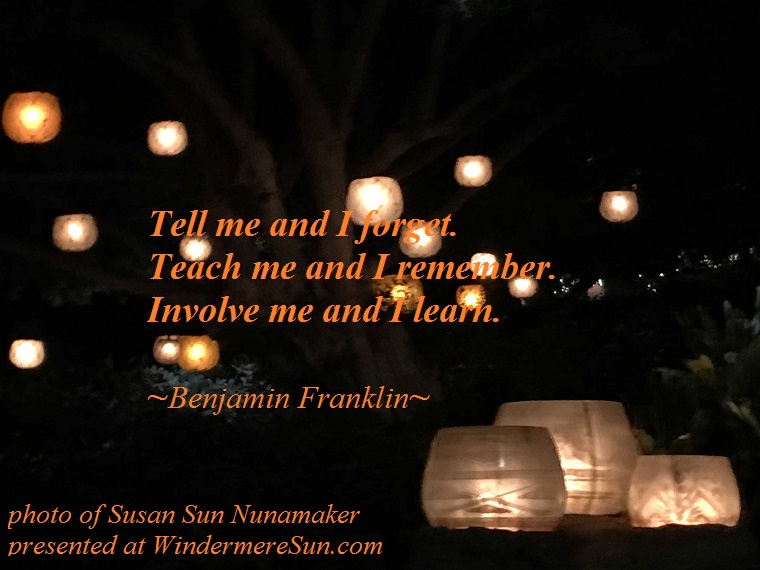 “Tell me and I forget. Teach me and I remember. Involve me and I learn.” (quote of Benjamin Franklin, photo of Susan Sun Nunamaker. presented at WindermereSun.com)

This is the Year of the Dog, according to the Lunar calendar. So, be prepared to be seeing lots of dog photos in the next couple of weeks. Above, is a photo of a Siberian Husky puppy that loves to play with water. To find out a bit more about Siberian Husky, please feel free to peruse through the excerpt from wikipedia, below, in italics:

The Siberian Husky (Russian: Сибирский хаски) is a medium size working dog breed that originated in north-eastern Siberia, Russia. The breed belongs to the Spitz genetic family. It is recognizable by its thickly furred double coat, erect triangular ears, and distinctive markings.

The original Siberian Huskies were bred by the Chukchi people — whose hunter-gatherer culture relied on their help. It is an active, energetic, resilient breed, whose ancestors lived in the extremely cold and harsh environment of the Siberian Arctic. William Goosak, a Russian fur trader, introduced them to Nome, Alaska during the Nome Gold Rush, initially as sled dogs. The people of Nome referred to Siberian Huskies as “Siberian Rats” due to their size of 40–50 lb (18–23 kg), versus the Malamute size of 75–85 lb (34–39 kg).

The first dogs arrived in the Americas 12,000 years ago; however, people and their dogs did not settle in the Arctic until the Paleo-Eskimo people 4,500 years ago and then the Thule people 1,000 years ago, both originating from Siberia. The Siberian Husky was originally developed by the Chukchi people of the Chukchi Peninsula in eastern Siberia. They were brought to Nome, Alaska, in 1908 for sled-dog racing.

“Tell me and I forget. Teach me and I remember. Involve me and I learn.” (quote of Benjamin Franklin, photo of Susan Sun Nunamaker. presented at WindermereSun.com)

Benjamin Franklin was a man of much practical wisdom. He once commented, “Tell me and I forget. Teach me and I remember. Involve me and I learn.”

Benjamin Franklin FRS FRSE (January 17, 1706 [O.S. January 6, 1705] – April 17, 1790) was a renowned polymath and one of the Founding Fathers of the United States. Franklin was a leading author, printer, political theorist, politician, freemason, postmaster, scientist, inventor, humorist, civic activist, statesman, and diplomat. As a scientist, he was a major figure in the American Enlightenment and the history of physics for his discoveries and theories regarding electricity. As an inventor, he is known for the lightning rod, bifocals, and the Franklin stove, among other inventions. He founded many civic organizations, including Philadelphia’s fire department and the University of Pennsylvania.

Franklin earned the title of “The First American” for his early and indefatigable campaigning for colonial unity, initially as an author and spokesman in London for several colonies. As the first United States Ambassador to France, he exemplified the emerging American nation.Franklin was foundational in defining the American ethos as a marriage of the practical values of thrift, hard work, education, community spirit, self-governing institutions, and opposition to authoritarianism both political and religious, with the scientific and tolerant values of the Enlightenment. In the words of historian Henry Steele Commager, “In a Franklin could be merged the virtues of Puritanism without its defects, the illumination of the Enlightenment without its heat.” To Walter Isaacson, this makes Franklin “the most accomplished American of his age and the most influential in inventing the type of society America would become.”

Franklin became a successful newspaper editor and printer in Philadelphia, the leading city in the colonies, publishing the Pennsylvania Gazette at the age of 23. He became wealthy publishing this and Poor Richard’s Almanack, which he authored under the pseudonym “Richard Saunders”. After 1767, he was associated with the Pennsylvania Chronicle, a newspaper that was known for its revolutionary sentiments and criticisms of the British policies.

He pioneered and was first president of Academy and College of Philadelphia which opened in 1751 and later became the University of Pennsylvania. He organized and was the first secretary of the American Philosophical Society and was elected president in 1769. Franklin became a national hero in America as an agent for several colonies when he spearheaded an effort in London to have the Parliament of Great Britain repeal the unpopular Stamp Act. An accomplished diplomat, he was widely admired among the French as American minister to Paris and was a major figure in the development of positive Franco-American relations. His efforts proved vital for the American Revolution in securing shipments of crucial munitions from France.

He was promoted to deputy postmaster-general for the British colonies in 1753, having been Philadelphia postmaster for many years, and this enabled him to set up the first national communications network. During the Revolution, he became the first United States Postmaster General. He was active in community affairs and colonial and state politics, as well as national and international affairs. From 1785 to 1788, he served as governor of Pennsylvania. He initially owned and dealt in slaves but, by the 1750s, he argued against slavery from an economic perspective and became one of the most prominent abolitionists.

His colorful life and legacy of scientific and political achievement, and his status as one of America’s most influential Founding Fathers, have seen Franklin honored more than two centuries after his death on coinage and the $100 bill, warships, and the names of many towns, counties, educational institutions, and corporations, as well as countless cultural references.