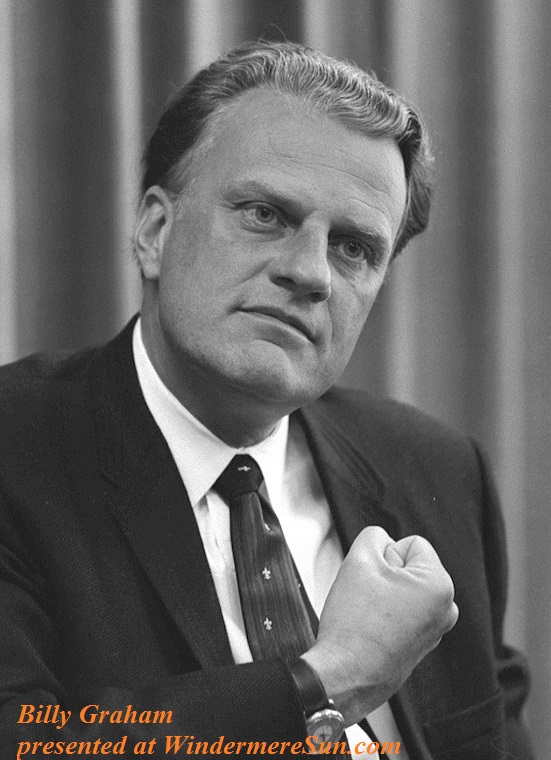 On Wednesday, Feb. 21, 2018, the evangelist Billy Graham died at age 99, after spending 60 years in prominent pulpits and in the political limelight. It is difficult to find any clergy in any era who have ascended quite so far in the national political consciousness as Billy Graham. Some called him the “Protestant Pope.” His name is always spoken with respect by a wide range of the citizenry. Below is an excerpt on Billy Graham in wikipedia, in italics.

William Franklin Graham Jr. KBE (November 7, 1918 – February 21, 2018) was an American evangelical Christian evangelist and an ordained Southern Baptist minister who became well known internationally after 1949. He has been looked upon as one of the most influential preachers of the 20th century. He held large indoor and outdoor rallies with sermons that were broadcast on radio and television, some still being re-broadcast into the 21st century.

In his six decades of television, Graham hosted annual Billy Graham Crusades, which ran from 1947 until his retirement in 2005. He also hosted the popular radio show Hour of Decision from 1950 to 1954. He repudiated racial segregation. In addition to his religious aims, he helped shape the worldview of a huge number of people who came from different backgrounds, leading them to find a relationship between the Bible and contemporary secular viewpoints. Graham preached to live audiences of nearly 215 million people in more than 185 countries and territories through various meetings, including BMS World Mission and Global Mission. He also reached hundreds of millions more through television, video, film, and webcasts.

Graham was a spiritual adviser to American presidents and provided spiritual counsel for every president from Harry Truman to Barack Obama. He was particularly close to Dwight D. Eisenhower, Lyndon B. Johnson (one of Graham’s closest friends), and Richard Nixon. He insisted on racial integration for his revivals and crusades in 1953 and invited Martin Luther King Jr. to preach jointly at a revival in New York City in 1957. Graham bailed King out of jail in the 1960s when King was arrested during demonstrations. He was also lifelong friends with another televangelist, the founding pastor of the Crystal Cathedral, Robert H. Schuller, whom Graham talked into starting his own television ministry.

Graham operated a variety of media and publishing outlets. According to his staff, more than 3.2 million people have responded to the invitation at Billy Graham Crusades to “accept Jesus Christ as their personal savior“. As of 2008, Graham’s estimated lifetime audience, including radio and television broadcasts, topped 2.2 billion. Because of his crusades, Graham preached the gospel to more people in person than anyone in the history of Christianity. Graham was repeatedly on Gallup’s list of most admired men and women. He appeared on the list 60 times since 1955, more than any other individual in the world. Grant Wacker reports that by the mid-1960s, he had become the “Great Legitimator”.


On August 13, 1943, Graham married Wheaton classmate Ruth Bell, whose parents were Presbyterian missionaries in China. Her father, L. Nelson Bell, was a general surgeon. Ruth Graham died on June 14, 2007, at the age of 87. The Grahams were married for almost 64 years.
Graham and his wife had five children together: Virginia Leftwich (Gigi) Graham (b. 1945), an inspirational speaker and author; Anne Graham Lotz (b. 1948), runs AnGeL ministries); Ruth Graham (b. 1950), founder and president of Ruth Graham & Friends, leads conferences throughout the U.S. and Canada; Franklin Graham (b. 1952), serves as president and CEO of the Billy Graham Evangelistic Association and as president and CEO of international relief organization, Samaritan’s Purse; and Nelson Edman Graham (b. 1958), a pastor who runs East Gates Ministries International, which distributes Christian literature in China.

Graham had 19 grandchildren and numerous great-grandchildren. His grandson Tullian Tchividjian, son of Gigi, was the senior pastor of Coral Ridge Presbyterian Church in Fort Lauderdale, Florida until he was defrocked in June 2015 after admitting to an extra-marital affair. Tchividjian later filed for divorce from his wife, Kim. Grandson Basyle “Boz” Tchividjian, a former child abuse chief prosecutor and professor at Liberty University School of Law, is the founder and executive director of Godly Response to Abuse in the Christian Environment, a nonprofit dedicated to preventing and responding to abuse in Christian organizations.
Below, is”Billy Graham: Technology, faith and human shortcomings“. Speaking at TED in 1998, Rev. Billy Graham marvels at technology’s power to improve lives and change the world — but says the end of evil, suffering and death will come only after the world accepts Christ. A legendary talk from TED’s archives:

,?center>
Gathered, written, and posted by Windermere Sun-Susan Sun Nunamaker
More about the community at www.WindermereSun.com