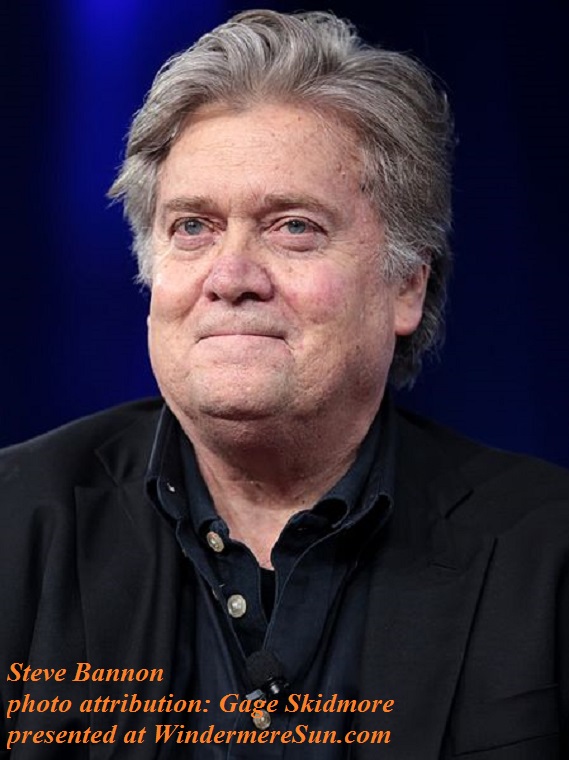 Steve Bannon, the former White House Chief Strategist in the administration of U.S. President Donald Trump during the first seven months of Trump’s term (but now with very contentious relationship with the President Trump), was in the news much this week, due to Mueller’s subpoena of Bannon for Russia investigation. At the closed House Intelligence Committee meeting on Tuesday (Jan. 16, 2018), where Bannon was suppose to testify, apparently Bannon was told by the White House to not answer House Intelligence Committee’s questions about his (Bannon’s) time in the White House during transition or after inauguration period. The committee decided to issue Bannon a subpoena on the spot, during the nine and half hours of interview,  to compel Bannon to answer their questions. But Bannon continued to refuse to answer questions because he was instructed by the White House not to respond to certain topics.

Betsy Woodruff, political reporter for The Daily Beast, talks with Rachel Maddow about breaking news that Steve Bannon will speak freely to special counsel Robert Mueller,  because the executive privilege that prevented him from speaking to House Intelligence Committee does not apply to a Mueller grand jury, below:

Rachel Maddow reports on new details about how Mueller’s subpoena prevents Steve Bannon from testifying fully to Congress, and the questions surrounding the peculiar way that Bannon was subpoenaed by both Robert Mueller and the House Intelligence Committee, below: One day after news that ousted Trump aide Steve Bannon got a subpoena from Robert Mueller, there’s news Bannon is cooperating with the Russia Special Counsel. Our expert panel breaks it all down, below: Failure to answer these questions may lead to contempt (jail?) or litigation.

Bannon has agreed to an interview with Special Counsel Robert S. Mueller III in the Russia investigation. The subpoena ordered by Mueller would require Bannon to appear before the grand jury, but Bannon can opt to meet with Mueller ‘s special team instead. Judge Napoliano explains why this is a very dangerous environment (potential perjury trap) for Steve Bannon, below:

Is Steve Bannon ready to tell all? Former White House Chief Strategist Steve Bannon faces two subpoenas in the Russia probe and new reports reveal he is ready to tell all. NBC’s Kristen Welker has some exclusive information and Stephanie’s panel: Washington Post White House Reporter Ashley Parker, Former RNC Chairman Michael Steele, and MSNBC Contributor Eddie Glaude weigh in, below: Do you also think that this is all about money? We will keep you posted.