Passage of Martin Luther King Jr. Day, Third Monday of Each January, Through Will of People 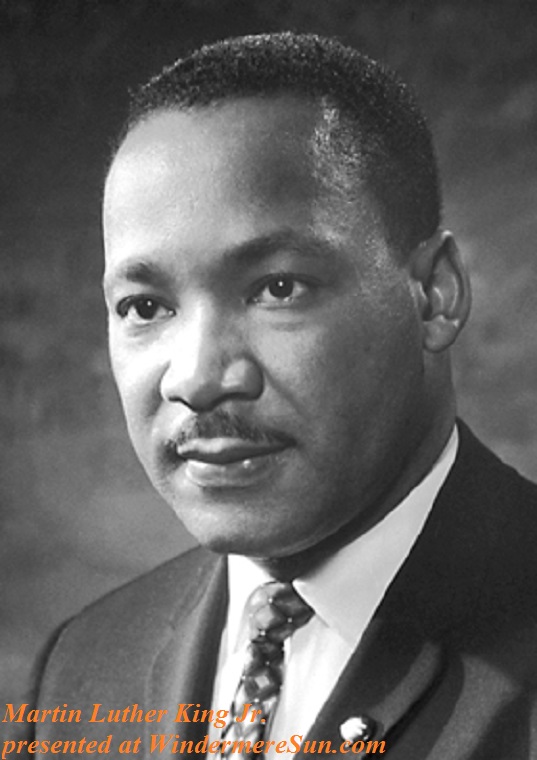 Let’s hear these words of Yolanda Renee King: “Spread the word. Have you heard: All across the nation, we are going to be a great generation!”
On the third Monday of January each year, which is around Martin Luther King Jr.’s birthday, January 15, it is an American federal holiday, marking the birthday of Martin Luther King Jr. King was the chief spokesperson for nonviolent activism in the Civil Rights Movement, which successfully protested racial discrimination in federal and state law. The campaign for a federal holiday in King’s honor began soon after his assassination in 1968. President Ronald Reagan signed the holiday into law in 1983, and it was first observed three years later. At first, some states resisted observing the holiday as such, giving it alternative names or combining it with other holidays. It was officially observed in all 50 states for the first time in 2000.
Below, you will find Martin Luther King’s Address at March on Washington August 28, 1963. Washington, D.C. When we let freedom ring, when we let it ring from every village and every hamlet, from every state and every city, we will be able to speed up that day when all of God’s children, black men and white men, Jews and Gentiles, Protestants and Catholics, will be able to join hands and sing in the words of the old Negro spiritual, “Free at last! free at last! thank God Almighty, we are free at last!“
Biography of Martin Luther King Jr., below:
Martin Luther King Jr.’s last speech, below:
To better understand the passage of this holiday, allow me to share with you an excerpt from wikipedia on this topic, in italics, below:

The idea of Martin Luther King Jr. Day as a holiday was promoted by labor unions in contract negotiations.  After King’s death, U.S. Representative John Conyers (a Democrat from Michigan) and U.S. SenatorEdward Brooke (a Republican from Massachusetts) introduced a bill in Congress to make King’s birthday a national holiday. The bill first came to a vote in the U.S. House of Representatives in 1979. However, it fell five votes short of the number needed for passage. Two of the main arguments mentioned by opponents were that a paid holiday for federal employees would be too expensive, and that a holiday to honor a private citizen would be contrary to longstanding tradition (King had never held public office). Only two other figures have national holidays in the U.S. honoring them: George Washington and Christopher Columbus.

Soon after, the King Center turned to support from the corporate community and the general public. The success of this strategy was cemented when musician Stevie Wonder released the single “Happy Birthday” to popularize the campaign in 1980 and hosted the Rally for Peace Press Conference in 1981. Six million signatures were collected for a petition to Congress to pass the law, termed by a 2006 article in The Nationas “the largest petition in favor of an issue in U.S. history.”

Senators Jesse Helms and John Porter East (both North Carolina Republicans) led opposition to the holiday and questioned whether King was important enough to receive such an honor. Helms criticized King’s opposition to the Vietnam War and accused him of espousing “action-oriented Marxism“. Helms led a filibuster against the bill and on October 3, 1983, submitted a 300-page document to the Senate alleging that King had associations with communists. New York Senator Daniel Patrick Moynihan declared the document a “packet of filth”, threw it on the Senate floor and stomped on it.

President Ronald Reagan originally opposed the holiday, citing cost concerns. When asked to comment on Helms’ accusations that King was a communist, the president said “We’ll know in thirty-five years, won’t we?”, in reference to the eventual release of FBI surveillance tapes that had previously been sealed. But on November 2, 1983, Reagan signed a bill, proposed by Representative Katie Hall of Indiana, to create a federal holiday honoring King. The bill had passed the House of Representatives by a count of 338 to 90, a veto-proof margin. The holiday was observed for the first time on January 20, 1986.

The bill also established the Martin Luther King Jr. Federal Holiday Commission to oversee observance of the holiday, and Coretta Scott King, King’s wife, was made a member of this commission for life by President George H. W. Bush in May 1989.

Although the federal holiday honoring King was signed into law in 1983 and took effect three years later, not every U.S. state chose to observe the holiday at the state level until 1991, when the New Hampshire legislature created “Civil Rights Day” and abolished “Fast Day“. In 2000, Utah became the last state to have a holiday named after King when “Human Rights Day” was officially changed to “Martin Luther King Jr. Day.”

In 1986, Arizona Governor Bruce Babbitt, a Democrat, created a paid state MLK holiday in Arizona by executive order just before he left office, but in 1987, his Republican successor Evan Mecham, citing an attorney general’s opinion that Babbitt’s order was illegal, reversed Babbitt’s decision days after taking office. Later that year, Mecham proclaimed the third Sunday in January to be “Martin Luther King Jr./Civil Rights Day” in Arizona, albeit as an unpaid holiday. In 1990, Arizona voters were given the opportunity to vote on giving state employees a paid MLK holiday. That same year, the National Football League threatened to move Super Bowl XXVII, which was planned for Arizona in 1993, if the MLK holiday was voted down. In the November election, the voters were offered two King Day options: Proposition 301, which replaced Columbus Day on the list of paid state holidays, and Proposition 302, which merged Lincoln’s and Washington’s birthdays into one paid holiday to make room for MLK Day. Both measures failed to pass, with only 49% of voters approving Prop 302, the more popular of the two options; although some who voted “no” on 302 voted “yes” on Prop 301. Consequently, the state lost the chance to host Super Bowl XXVII, which was subsequently held at the Rose Bowl in Pasadena, California. In a 1992 referendum, the voters, this time given only one option for a paid King Day, approved state-level recognition of the holiday.

On May 2, 2000, South Carolina governor Jim Hodges signed a bill to make King’s birthday an official state holiday. South Carolina was the last state to recognize the day as a paid holiday for all state employees. Prior to this, employees could choose between celebrating Martin Luther King Jr. Day or one of three Confederate holidays.

Overall, in 2007, 33% of employers gave employees the day off, a 2% increase over the previous year. There was little difference in observance by large and small employers: 33% for firms with over 1,000 employees; and, 32% for firms with under 1,000 employees. The observance is most popular among nonprofit organizations and least popular among factories and manufacturers. The reasons for this have varied, ranging from the recent addition of the holiday, to its occurrence just two weeks after the week between Christmas and New Year’s Day, when many businesses are closed for part or sometimes all of the week. Additionally, many schools and places of higher education are closed for classes; others remain open but may hold seminars or celebrations of King’s message. Some factories and manufacturers used MLK Day as a floating or movable holiday.

The national Martin Luther King Day of Service was started by former Pennsylvania U.S. Senator Harris Wofford and Atlanta Congressman John Lewis, who co-authored the King Holiday and Service Act. The federal legislation challenges Americans to transform the King Holiday into a day of citizen action volunteer service in honor of King. The federal legislation was signed into law by President Bill Clinton on August 23, 1994. Since 1996, Wofford’s former state office director, Todd Bernstein, has been directing the annual Greater Philadelphia King Day of Service, the largest event in the nation honoring King.

Several other universities and organizations around the U.S., such as Arizona State University, Greater DC Cares and City Year, participate in the Martin Luther King Jr. Day of Service. In honor of MLK, hundreds of Volunteer Centers, and volunteers across the country donate their time to make a difference on this day.

The only other official national day of service in the USA, as designated by the government, is September 11 National Day of Service (9/11 Day).

Outside the United States

One place outside the U.S. where Martin Luther King Jr. Day is observed with equal importance is in the Japanese city of Hiroshima under mayor Tadatoshi Akiba, who holds a special banquet at the mayor’s office as an act of unifying his city’s call for peace with King’s message of human rights.

The City of Toronto, in Ontario, Canada, is another city that has officially recognized Martin Luther King Jr. Day, although not as a paid holiday: all government services and businesses remain open.

In 1984, during a visit by the U.S. Sixth Fleet, Navy chaplain Rabbi Arnold Resnicoff conducted the first Israeli presidential ceremony in commemoration of Martin Luther King Jr. Day, held in the President’s Residence, Jerusalem. Aura Herzog, wife of Israel’s then-President Chaim Herzog, noted that she was especially proud to host this special event, because Israel had a national forest in honor of King, and that Israel and King shared the idea of “dreams”. Resnicoff continued this theme in his remarks during the ceremony, quoting the verse from Genesis, spoken by the brothers of Joseph when they saw their brother approach, “Behold the dreamer comes; let us slay him and throw him into the pit, and see what becomes of his dreams.” Resnicoff noted that, from time immemorial, there have been those who thought they could kill the dream by slaying the dreamer, but – as the example of King’s life shows – such people are always wrong.

Every year, since 1986, the Dr. Martin Luther King Tribute and Dinner is held in Wassenaar, The Netherlands. The Tribute includes young people and veterans of the Civil Rights Movement as well as music. it always ends with everyone holding hands in a circle and singing “We Shall Overcome.” The Tribute is held on the last Sunday in January and bridges Dr. King’s birthday and Black History Month.