Scene at the Signing of the Constitution of the United States by Indian Reporter (presented at WindermereSun.com) 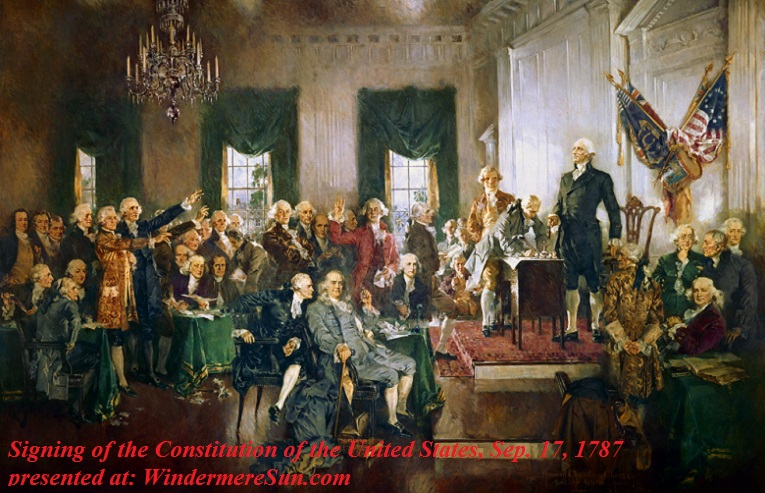 Scene at the Signing of the Constitution of the United States by Indian Reporter (presented at WindermereSun.com)

The Founding Fathers of United States, has provided all of its citizens with the right to trial by jury of peers, and the right to  appeal up to higher court (all the way up to Supreme Court) if the outcome is not favorable. But in case of Impeachment,  the Founding Fathers intentionally did not provide the President with the right to appeal. The President of the United States (POTUS) can be brought up on impeachment charges by a vote of the House of Representatives, then POTUS has the right to a trial in the United States Senate in which members of the Senators are the jurors. United States Senate is the court of last resort in such cases of impeachment of POTUS.  POTUS does not have the right to appeal to a higher court. In a recent article “The case for normalizing impeachment” by Ezra Klein, the co-founder of Vox and a scholar on the subject of impeachment, eloquently and thoroughly explains why impeaching an unfit president has consequences, but leaving one in office could be worse.  I highly recommend the reading of “The case for normalizing impeachment” (<–click)

Under the subsection of “What is an impeachable offense?“,  Ezra Klein wrote (in italics) that a federal Judge John Pickering  was an alcoholic and likely suffered from early-stage dementia. He would rant and rave from the bench. The official charges held that Pickering exhibited “loose morals and intemperate habits,” neither of which sounds like a high crime or misdemeanor to modern ears. He was convicted on all counts and removed from office. It was President Thomas Jefferson who sent evidence to the House of Representatives against Pickering on Feb. 3, 1803, and the Senate convicted Pickering of all charges (thereby immediate removal from office), by a vote of 19 to 7, on March 12, 1804.

Below, in an interview with Lawrence O’Donnell of MSNBC, we hear from Ezra Klein on what “high crimes and misdemeanors” means and why impeaching Donald Trump doesn’t require Trump to have committed a crime:

Ezra Klein implores us to look into the performance and standard of POTUS, in addition to high crimes and misdemeanors, especially given the fact that 21st century POTUS has reach far beyond just the border of USA. The wrong person in the POTUS office may potentially lead to nuclear holocaust.

From another perspective, at least 17 communities around the country are now on record calling for impeachment proceedings against President Trump. The town of Weston, Massachusetts joined that list, when residents supported a citizen petition asking the House to assess whether Trump is violating the Constitution. This comes as a nationwide petition for impeachment launched in October by Democratic donor Tom Steyer ( https://www.needtoimpeach.com/), topping more than 3 million supporters and now getting close to 4 million supporters.

Below, is the video (back in June of 2017) that explains Why Tom Steyer  Wants President Trump Impeached:

But calls for President Trump’s impeachment have been criticized by some Democratic leaders, who say it should come after investigators have concluded their work. Below, is an interview,  “Constitutional Expert Says Move to Impeach Trump Can Proceed Without Derailing FBI’s Criminal Probe“, Amy Goodman of Democracy Now! speaks with constitutional attorney John Bonifaz, co-founder and director of Free Speech for People.

John Bonifaz explains the reason behind this campaign for impeachment since the day of inauguration: because President Trump has refused to divest from his business holdings all across the world, in defiance of the anti-corruption provisions in the clauses in the U.S. Constitution.  John Bonifaz stresses that it is not a campaign of dissatisfaction against Trump’s policy, but a campaign defending the basic concept and integrity of the U.S. Constitution.

You may be interested in reading about the Emolument Clause from The Heritage Guide to The Constitution.

You may be interested in reading about the Domestic Emolument Clause from The Constitution Accountability Center.

You may be interested in reading about the Foreign Emolument Clause from the Constitution Center.

You may be interested in reading about the Here’s the Part of the U.S. Constitution Two Attorney Generals Say Trump Is Violating.

I believe the List of possible impeachable offenses (abuse of power and/or abuse of public trust) deserving of federal investigation, below:

Founding Fathers were very wise men and had built the Emolument Clause into the U.S. Constitution for good reasons.

What is the Will of the American People? With such an extended list of possible impeachable offenses, one is very likely to conclude that if the impeachment process will not move forward soon, there will be a dramatic change in the faces of representatives and senators in 2018. This is not a partisan issue. If you feel U.S. Constitution should be defended, contact your respective Representatives and Senators.

Below, Professor Allan Litchtman, who predicted both that Donald Trump would be elected and impeached, told Emily Maitlis it’s just a matter of when:

The list of possible impeachable offenses is growing so quickly that there are people organizing for The National March For Impeachment, on January 20, 2018, at Washington, DC while urging others to sign up at NeedToImpeach.
Gathered, written, and posted by Windermere Sun-Susan Sun Nunamaker