Special Senate Election of Alabama Result Is In 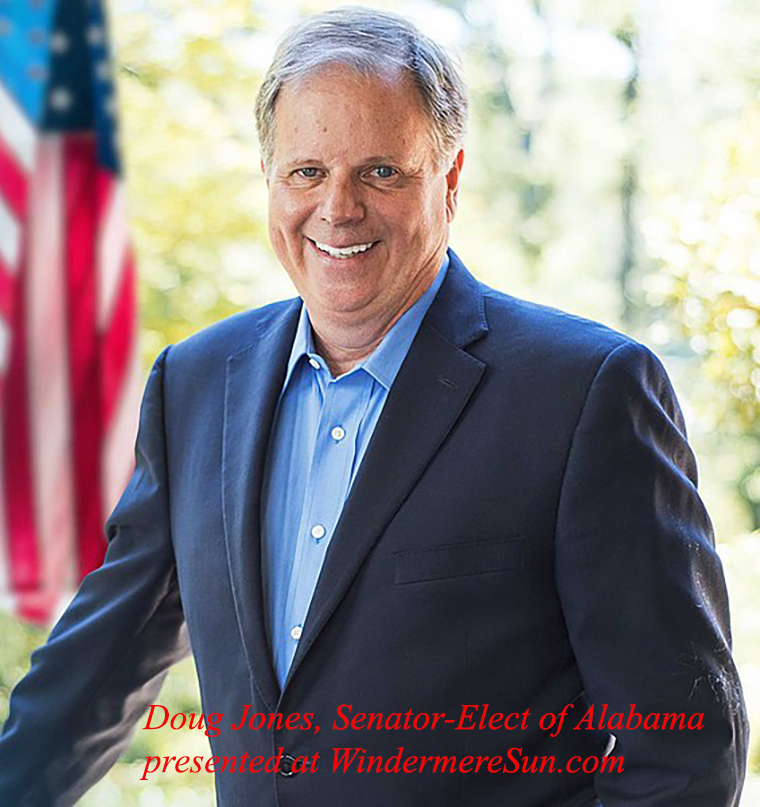 The much awaited result of Alabama special Senate election came in on Tuesday, December 12, 2017, with Democrat Doug Jones with 49.92% of the vote while Republican Roy Moore with 48.38% of the vote. The difference is 1.54%.

But Moore says he isn’t conceding yet and is demanding a recount during his brief remark late on Tuesday night. Alabama Secretary of State John Merrill said that any candidate may request for a recount if they pay for it on their own. Below is an excerpt from wikipedia page on Legal requirements for Election Recount, in italics:

Recounts can be mandatory or optional. In some jurisdictions, recounts are mandatory in the event the difference between the top two candidates is less than a percentage of votes cast or of a fixed number. Mandatory recounts are paid for by the elections official, or the state. Mandatory recounts can usually be waived by the apparent losing candidate. The winning side will usually encourage the loser to waive the recount in a show of unity and to avoid spending taxpayer money.

Each jurisdiction has different criteria for optional recounts. Some areas permit recounts for any office or measure, while others require that the margin of victory be less than a certain percentage before a recount is allowed. In all instances, optional recounts are paid for by the candidate, their political party, or, in some instances, by any interested voter. The person paying for the recount has the option to stop the recount at any time. If the recount reverses the election, the jurisdiction will then pay for the recount.

In the United Kingdom it is possible for a defeated candidate denied a recount by the Returning Officer, to request one from the court by means of an election petition. There are several cases where a Parliamentary election has been the subject of a court-ordered recount.

A bit of information about Senator-Elect Doug Jones of Alabama, in excerpt from wikipedia, in italics, below:

Gordon Douglas Jones (born May 4, 1954) is an American attorney and politician. He is a former federal prosecutor, and is the United States senator-elect from Alabama.

Jones served as the United States Attorney for the Northern District of Alabama from 1997 to 2001. He prosecuted the remaining two Ku Klux Klan perpetrators of the 16th Street Baptist Church bombing which killed four African-American girls in 1963, and also secured an indictment against the Atlanta Olympic Park Bomber.

Doug Jones was born in 1954 in Fairfield, Alabama, to Gordon and Gloria Jones. His father worked at U.S. Steel and his mother was a homemaker. Jones graduated from the University of Alabama with a Bachelor of Science in Political Science in 1976 and earned his Juris Doctor from Cumberland School of Law at Samford University in 1979.

He began his career by working as staff counsel to the U.S. Senate Judiciary Committee for Democratic Senator Howell Heflin from Alabama. Jones then worked as an Assistant U.S. Attorney from 1980 to 1984 before resigning to work at a private law firm in Birmingham, Alabama, from 1984 to 1997.

President Bill Clinton announced on August 18, 1997, his intent to appoint Jones as U.S. Attorney for the Northern District of Alabama, and formally nominated Jones to the post on September 2, 1997. On September 8, 1997, the U.S. District Court for the Northern District of Alabama appointed Jones as interim U.S. Attorney. The Senate confirmed Jones’ nomination on November 8, 1997, by voice vote.

In January 1998, Eric Rudolph bombed the New Woman All Women Health Care Center in Birmingham. Jones became responsible for coordinating the state and federal task force in the aftermath, and advocated for Rudolph to be tried first in Birmingham before being extradited and tried in Georgia for his crimes in that state, such as the Centennial Olympic Park bombing.

Jones prosecuted Thomas Edwin Blanton Jr. and Bobby Frank Cherry, two members of the Ku Klux Klan, for their roles in the 1963 16th Street Baptist Church bombing. The case was reopened the year before Jones was appointed, but did not pick up traction until his appointment. A federal grand jury was called in 1998 which piqued the attention of Cherry’s ex-wife, Willadean Cherry, and led her to call the FBI to report her testimony. Willadean then introduced Jones to family and friends who reported their own experiences from the time of the bombing. A key piece of evidence was a tape from the time of the bombing in which Blanton stated that he had plotted with others to make the bomb. Jones was deputized in order to argue in state court and was able to indict Blanton and Cherry in 2000. Blanton was found guilty in 2001, and Cherry was found guilty in 2002. Both Blanton and Cherry were sentenced to life in prison. Blanton was up for parole in 2016, at which Jones spoke in opposition to his potential release. Blanton’s parole was denied. Cherry died in prison in 2004.

Jones left office in 2001 and returned to private practice. In 2004, he was court-appointed General Special Master in an environmental clean-up case involving Monsanto in Anniston, Alabama. In 2007 Jones was honored with the 15th Anniversary Civil Rights Distinguished Service Award from the Birmingham Civil Rights Institute. Also in 2007, Jones testified before the United States House Committee on the Judiciary about the importance of re-examining crimes of the Civil Rights Era. He created the Birmingham firm Jones & Hawley, PC with longtime friend Greg Hawley in 2013. He was named one of B-Metro Magazine’s Fusion Award winners in 2015. In 2017 he received the Lifetime Achievement Award from the Alabama chapter of the Young Democrats of America.

In May 2017, Jones announced his candidacy for that year’s U.S. Senate special election, running for the seat left open when Jeff Sessions was appointed as Attorney General. When Democrat Howell Heflin had chosen not to run for re-election as US Senator in 1996, Republican Sessions won the seat and had kept it through re-elections.

Jones won the Democratic nomination in August, and became the Senator-elect for Alabama after apparently defeating Roy Moore in the general election on December 12, 2017. He will serve until January 2021, the balance of Sessions’ term.

President Donald Trump tweeted his congratulations to Jones on election night. However, as of the next day Moore has not conceded and has said “It’s not over”. There would be an automatic recount if the difference in their vote count was 0.5% or less; with all precincts reporting Jones leads by more than 20,000 votes, or 1.5%.

The editorial board of The Birmingham News has described Jones as a “moderate Democrat.” Former Alabama Democratic Party chair Giles Perkins described Jones as “a moderate, middle-of-the-road guy.” Describing his own views, Jones said that “If you look at the positions I’ve got on health care, if you look at the positions I [have] got on jobs, you should look at the support I have from the business community; I think I’m pretty mainstream.” Jones’ campaign has emphasized “kitchen table” issues such as healthcare and the economy. He has called for bipartisan solutions to those issues, and pledged to “find common ground” between both sides of the aisle.

Jones has not called for tax increases; instead unlike some Democrats, he has called for reductions in corporate taxes “to try to get reinvestment back into this country”. Jones opposes the Tax Cuts and Jobs Act of 2017, the GOP’s tax plan, calling it fiscally irresponsible, and skewed to the wealthy while ignoring or hurting the middle class. Jones supports increasing job training for workers and better education, along with an increase in the minimum wage for people in poverty. Jones also opposes allowing insurance companies to deny coverage for preexisting conditions and supports expanding Medicaid coverage, citing the problems faced by rural Alabama hospitals that are struggling financially to provide services to some of the neediest people in the state. He has been described as an economic populist by Newsweek. He has also come out in support of the Lilly Ledbetter Fair Pay Act. On health care, Jones opposes the repeal of the Affordable Care Act, but has called for changes to the U.S. health-care system, which he calls broken. He supports the re-authorization of the Children’s Health Insurance Program(CHIP), and has repeatedly criticized his opponent Moore for his lack of a clear stance on the program. Jones says he is open to the idea of a public option.

Jones supports stronger protection of civil rights. He has cited the Charlottesville rally and the Charleston church massacre as examples of racial issues to be addressed. Jones also supports the reversal of mandatory three-strikes laws for non-violent offenses to give judges flexibility in giving sentences. In an interview with The Birmingham News, he said that he opposes additional restrictions on abortion (such as proposals to ban abortion after the 20th week of gestation), saying current laws on the issue are sufficient. Jones has also supported same-sex marriage.

Jones has condemned corruption in Alabama in the wake of high-profile scandals, saying, “the people of Alabama have been embarrassed by corruption and a string of ethics investigations and convictions of people they placed into positions of power and trust. They deserve better. We all deserve better.”

Jones supports investment into renewable energy research and further wildlife conservation. He also supports the Paris Agreement on the environment and opposes the United States withdrawal ordered by President Trump; Jones says it would have significant negative effects on the environment.

Jones ran on a platform of strengthening American national defense. In an interview with The Birmingham News, Jones said he favored increasing defense spending, saying it would boost Alabama’s local economy, particularly in the areas around NASA’s Marshall Space Flight Center and the U.S. Army’s Redstone Arsenal, and would protect America from foreign threats.