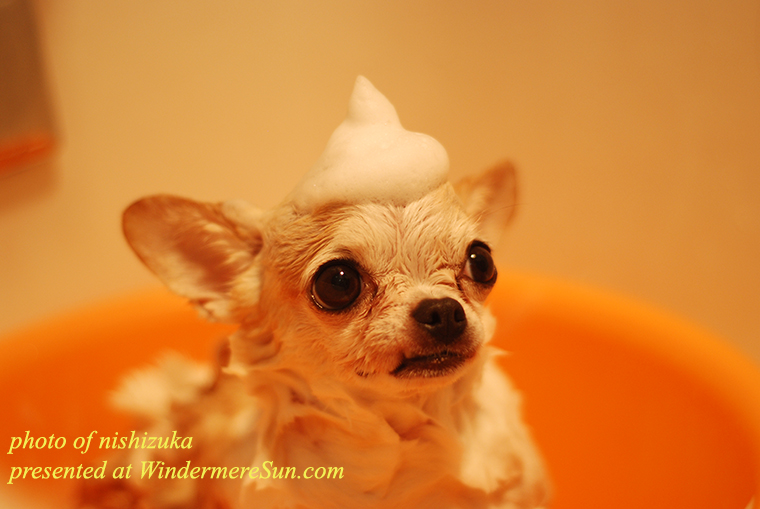 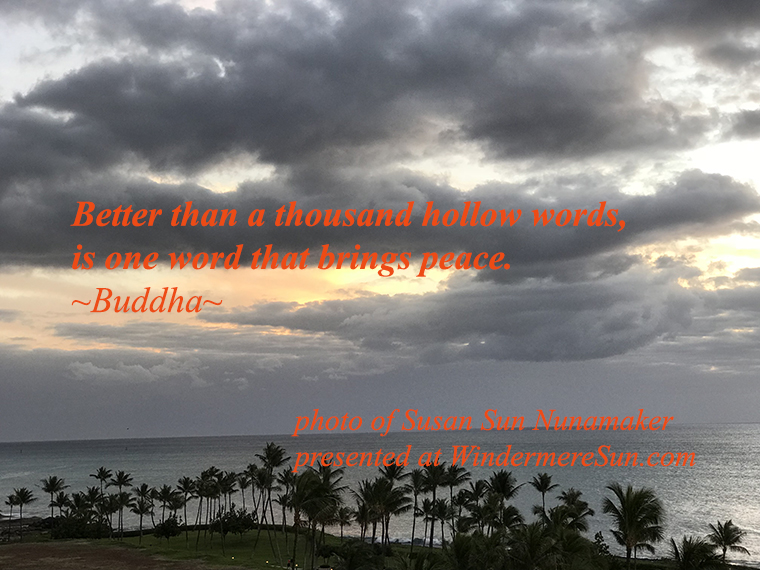 “Better than a thousand hollow words, is one word that brings peace. ” (quote of Buddha, presented at WindermereSun.com)

Some background information taken from wikipedia, on Chihuahua, in italics, below:

The Chihuahua is the smallest breed of dog and is named after the state of Chihuahua in Mexico. Chihuahuas come in a wide variety of colors, and two coat lengths.

Chihuahuas are the smallest breed recognized by some kennel clubs.

There are two varieties of Chihuahua – the Smooth Coat (shorthaired) and the Long Coat (longhaired). Both the Smooth and the Long Coats have their special attractions and are equally easy to keep clean and well groomed. The UK Kennel Club considers smooth and long coat Chihuahuas two distinct breeds; matings between the two are not eligible for KC registration.

Dogs of either coat type may be identified as either “apple head” or “deer head” Chihuahuas, particularly in the United States. Apple heads have rounded heads, close-set eyes, and relatively short ears and legs. Deer heads have flat-topped heads, more widely set eyes, larger ears, and longer, more slender legs. While deer heads were popular in the mid-twentieth century, current breed standards defined by registries such as the Chihuahua Club of America and American Kennel Club specify the apple head conformation.

The Chihuahua’s history is convoluted, and there are many theories surrounding the origin of the breed. Both folklore and archaeological finds show that the breed originated in Mexico. The most common theory is that Chihuahuas are descended from the Techichi, a companion dog favored by the Toltec civilization in Mexico. No records of the Techichi are available prior to the 9th century, although dog pots from Colima, Mexico, buried as part of the western Mexico shaft tomb tradition which date back to 300 BC are thought to depict Techichis. It is probable that earlier ancestors were present prior to the Mayas as dogs approximating the Chihuahua are found in materials from the Great Pyramid of Cholula, predating 1530 and in the ruins of Chichen Itza on the Yucatán Peninsula.

In fact, wheeled dog toys representing the Chihuahua have been unearthed across Mesoamerica from Mexico to El Salvador. The earliest of these were found at Tres Zapotes in Veracruz, Mexico, which date to 100 AD, indirect evidence that the breed was in Mexico over 1400 years before the first Europeans arrived.

How a Chihuahua turns out depends mightily on the genetic temperament of his parents and grandparents. However, as with all dogs, socialization and training are very important. Like many small dogs, Chihuahuas are less likely than large dogs to be given obedience classes, socialization, or appropriate exercise and training. Frequent victims of “small dog syndrome,” in which owners feel no need to provide the kind of training and socialization routinely provided for larger dogs, untrained Chihuahuas suffer the same predictable behavior problems as other untrained dogs regardless of the breed. However, they thrive well when given appropriate socialization and training.

This breed requires expert veterinary attention in areas such as birthing and dental care. Dental care is a must for these small dogs, whose jaw size makes for weaker teeth. Although daily brushing provides the best preventative measure, feeding a dental diet or using dental chews for dogs is an effective approach pet owners can take to help prevent and control accumulation of plaque and tartar to avoid consequences of severe periodontal disease. The best physical characteristics of dog food to contribute to cleaning a dog’s teeth would be food that is large and dense, that way there is more time spent chewing which leads to the surface of the teeth being cleaned.

“Better than a thousand hollow words, is one word that brings peace. (quote of Buddha, photo of Susan Sun Nunamaker, presented at WindermereSun.com)

Buddha once said, “Better than a thousand hollow words, is one word that brings peace.”

To learn more about Buddha, please refer to the excerpt from wikipedia, in italics, below:

Gautama Buddha (c. 563 BCE/480 BCE – c. 483 BCE/400 BCE), also known as Siddhārtha Gautama, Shakyamuni Buddha  or simply the Buddha, after the title of Buddha, was an ascetic (śramaṇa) and sage, on whose teachings Buddhism was founded. He is believed to have lived and taught mostly in the eastern part of ancient India sometime between the sixth and fourth centuries BCE.

Gautama taught a Middle Way between sensual indulgence and the severe asceticism found in the śramaṇa movement common in his region. He later taught throughout other regions of eastern India such as Magadha and Kosala.

Gautama is the primary figure in Buddhism. He is recognized by Buddhists as an enlightened teacher who attained full Buddhahood, and shared his insights to help sentient beings end rebirth and suffering. Accounts of his life, discourses, and monastic rules are believed by Buddhists to have been summarized after his death and memorized by his followers. Various collections of teachings attributed to him were passed down by oral tradition and first committed to writing about 400 years later.

In the earliest Buddhist texts, the nikāyas and āgamas, the Buddha is not depicted as possessing omniscience (sabbaññu)  nor is he depicted as being an eternal transcendent (lokottara) being. According to Bhikkhu Analayo, ideas of the Buddha’s omniscience (along with an increasing tendency to deify him and his biography) are found only later, in the Mahayana sutras and later Pali commentaries or texts such as the Mahāvastu. In the Sandaka Sutta, the Buddha’s disciple Ananda outlines an argument against the claims of teachers who say they are all knowing  while in the Tevijjavacchagotta Sutta the Buddha himself states that he has never made a claim to being omniscient, instead he claimed to have the “higher knowledges” (abhijñā). The earliest biographical material from the Pali Nikayas focuses on the Buddha’s life as a śramaṇa, his search for enlightenment under various teachers such as Alara Kalama and his forty-five-year career as a teacher.

Traditional biographies of Gautama generally include numerous miracles, omens, and supernatural events. The character of the Buddha in these traditional biographies is often that of a fully transcendent (Skt. lokottara) and perfected being who is unencumbered by the mundane world. In the Mahāvastu, over the course of many lives, Gautama is said to have developed supramundane abilities including: a painless birth conceived without intercourse; no need for sleep, food, medicine, or bathing, although engaging in such “in conformity with the world”; omniscience, and the ability to “suppress karma”. Nevertheless, some of the more ordinary details of his life have been gathered from these traditional sources. In modern times there has been an attempt to form a secular understanding of Siddhārtha Gautama’s life by omitting the traditional supernatural elements of his early biographies.

Andrew Skilton writes that the Buddha was never historically regarded by Buddhist traditions as being merely human:

It is important to stress that, despite modern Theravada teachings to the contrary (often a sop to skeptical Western pupils), he was never seen as being merely human. For instance, he is often described as having the thirty-two major and eighty minor marks or signs of a mahāpuruṣa, “superman”; the Buddha himself denied that he was either a man or a god; and in the Mahāparinibbāna Sutta he states that he could live for an aeon were he asked to do so.

The ancient Indians were generally unconcerned with chronologies, being more focused on philosophy. Buddhist texts reflect this tendency, providing a clearer picture of what Gautama may have taught than of the dates of the events in his life. These texts contain descriptions of the culture and daily life of ancient India which can be corroborated from the Jain scriptures, and make the Buddha’s time the earliest period in Indian history for which significant accounts exist. British author Karen Armstrong writes that although there is very little information that can be considered historically sound, we can be reasonably confident that Siddhārtha Gautama did exist as a historical figure. Michael Carrithers goes a bit further by stating that the most general outline of “birth, maturity, renunciation, search, awakening and liberation, teaching, death” must be true.