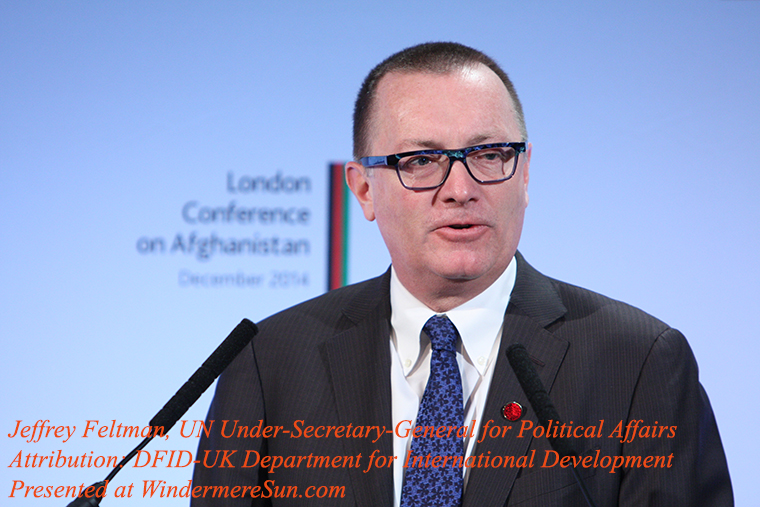 
After last week’s launch of North Korea’s “most powerful ICBM (intercontinental ballistic missile)”, that would potentially be able to reach as far as the East coast of USA, the United Nations political affairs chief, Jeffrey Feltman, the American diplomat and United Nations Under-Secretary-General for Political Affairs, began a four-day visit to Pyongyang, North Korea, on Tuesday, December 5, 2017. This is the first  trip by a senior UN official to N. Korea in six years. An UN spokesperson indicated that Jeffrey Feltman will be meeting with senior North Korean officials including foreign minister Ri Kong-ho and will have a wide range policy discussion on “issues of mutual interest and concern.”  Mr. Feltman is not scheduled to meet with North Korean leader Kim Jong-un. A bit of background information about Jeffrey Feltman, taken from wikipedia, in italics, below:

Jeffrey David Feltman (born 1959) is an American diplomat and is the United Nations Under-Secretary-General for Political Affairs. As head of the United Nations Department of Political Affairs Feltman oversees the UN’s diplomatic efforts to prevent and mitigate conflict worldwide. He speaks Hebrew, English, Arabic, French, and Hungarian. Feltman was born to Jewish parents in Greenville, Ohio in 1959. He received his undergraduate degree in history and fine arts from Ball State University in Indiana in 1981 and his Master’s degree in Law and Diplomacy from the Fletcher School of Law and Diplomacy at Tufts University in 1983.

Feltman joined the U.S. Foreign Service in 1986, serving his first tour as consular officer in Port-au-Prince, Haiti. He served as an economic officer at the U.S. Embassy in Hungary from 1988-91. From 1991-93, Feltman served in the office of the Deputy Secretary of State, Lawrence Eagleburger, as a Special Assistant concentrating on the coordination of U.S. assistance to Eastern and Central Europe.

After a year of Arabic studies at the University of Jordan in Amman, Feltman served in the U.S. Embassy in Tel Aviv from 1995-98, covering economic issues in the Gaza Strip. From 1998 to 2000, Feltman served as Chief of the Political and Economic Section at the U.S. Embassy in Tunisia. He served in Embassy Tel Aviv as Ambassador Martin Indyk‘s Special Assistant on Peace Process issues from 2000-01. He then moved to the U.S. Consulate General in Jerusalem, where he served first as Deputy (August 2001-November 2002) and then as Acting Principal Officer (November 2002 to December 2003).

Feltman volunteered to serve at the Coalition Provisional Authority office in Irbil, Iraq, from January to April 2004. from which he moved on to become the United States Ambassador to Lebanon from July 2004 to January 2008.

Feltman served as US Assistant Secretary of State for Near Eastern Affairs from August 2009 to June 2012 with the rank of Career Minister, before taking his post at the United Nations.

In September 2017, Feltman announced his support for Palestinian statehood, stating “Economic development, critical as it is, is no substitute for sovereignty and statehood”.

We wish Mr. Feltman a successful meeting and policy discussion in arriving at a peaceful resolution that would be  beneficial for every one.