Two of You?/If We Are Peaceful…. 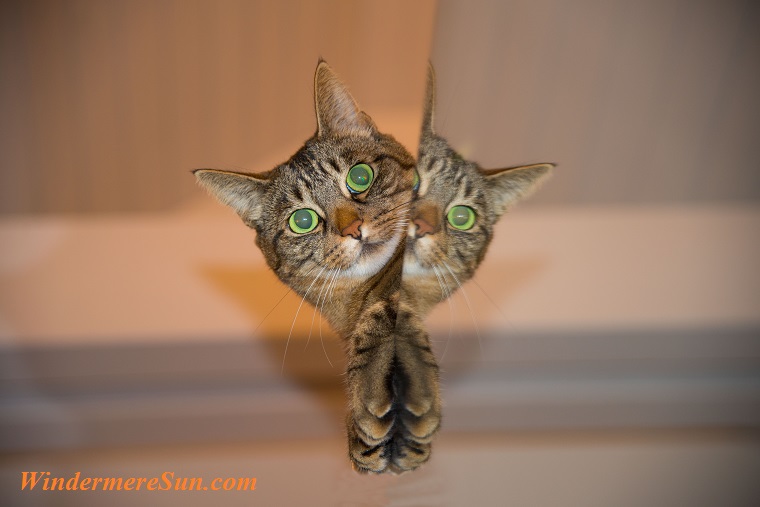 Two of you (presented at WindermereSun.com) 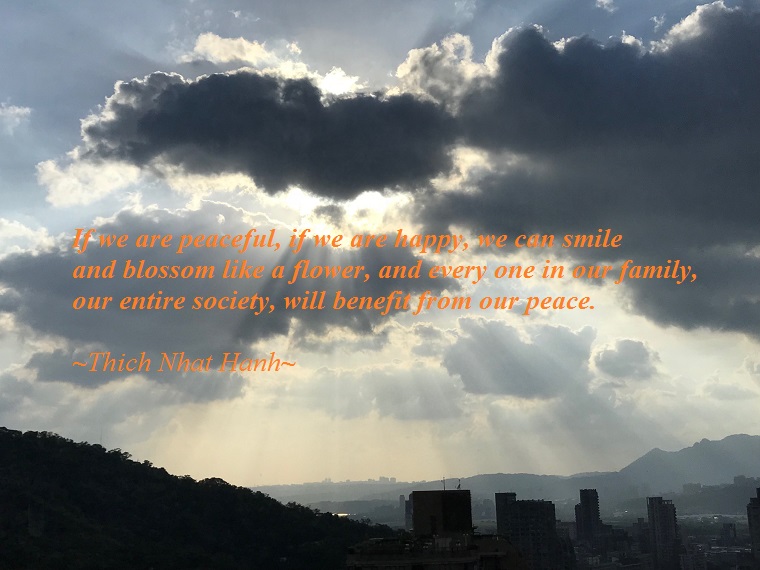 If we are peaceful, if we are happy, we can smile and blossom like a flower, and every one in our family, our entire society, will benefit from our peace. (quote of Thich Nhat Hanh, photo of Susan Sun Nunamaker, presented at WindermereSun.com)

Two of you (presented at WindermereSun.com)

Wow, are there really two of you, Cat?

If we are peaceful, if we are happy, we can smile and blossom like a flower, and every one in our family, our entire society, will benefit from our peace. (quote of Thich Nhat Hanh, photo of Susan Sun Nunamaker, presented at WindermereSun.com)

Thich Nhat Hanh once commented, “If we are peaceful, if we are happy, we can smile and blossom like a flower, and every one in our family, our entire society, will benefit from our peace.”

A bit of information about Thich Nhat Hanh taken from wikipedia, in italics, below:

listen); born as Nguyễn Xuân Bảo on October 11, 1926) is a Vietnamese Buddhist monk and peace activist. Thích Nhất Hạnh lives in Plum Village in southwest France, travelling internationally to give retreats and talks. He coined the term “Engaged Buddhism” in his book Vietnam: Lotus in a Sea of Fire. After a long term of exile, he was given permission to make his first return trip to Vietnam in 2005.

Nhất Hạnh has published more than 100 books, including more than 40 in English. He is active in the peace movement, promoting nonviolent solutions to conflict and he also refrains from animal product consumption as a means of nonviolence towards non-human animals.

Born as Nguyễn Xuân Bảo, Nhất Hạnh was born in the city of Huế in Central Vietnam in 1926. At the age of 16 he entered the monastery at Từ Hiếu Temple near Huế, Vietnam, where his primary teacher was Zen Master Thanh Quý Chân Thật. A graduate of Báo Quốc Buddhist Academy in Central Vietnam, Thích Nhất Hạnh received training in Vietnamese traditions of Mahayana Buddhism, as well as Vietnamese Thiền, and was ordained as a monk in 1949. In 1956 Nhất Hạnh was named editor-in-chief of Vietnamese Buddhism, the periodical of the Unified Vietnam Buddhist Association (Vietnamese: Giáo Hội Phật Giáo Việt Nam Thống Nhất). In the following years he founded Lá Bối Press, the Vạn Hanh Buddhist University in Saigon, and the School of Youth for Social Service (SYSS); a neutral corps of Buddhist peaceworkers who went into rural areas to establish schools, build healthcare clinics, and help rebuild villages. Nhất Hạnh is now recognized as a dharmacharya (teacher), and as the spiritual head of the Từ Hiếu Pagoda and associated monasteries. On May 1, 1966 at Từ Hiếu Temple, he received the “lamp transmission,” making him a dharmacharya, from Zen Master Chân Thật.

In 1961 Nhất Hạnh went to the US to teach comparative religion at Princeton University, and was subsequently appointed lecturer in Buddhism at Columbia University. By then he had gained fluency in   French, Chinese, Sanskrit, Pali , Japanese and English, in addition to his native Vietnamese. In 1963, he returned to Vietnam to aid his fellow monks in their non-violent peace efforts.

Nhất Hạnh taught Buddhist psychology and prajnaparamita literature at Vạn Hanh Buddhist University, a private institution that taught Buddhist studies, Vietnamese culture, and languages. At a meeting in April 1965, Vạn Hanh Union students issued a Call for Peace statement. It declared: “It is time for North and South Vietnam to find a way to stop the war and help all Vietnamese people live peacefully and with mutual respect.” Nhất Hạnh left for the U.S. shortly afterwards, leaving Chân Không in charge of the SYSS. Vạn Hạnh University was taken over by one of the Chancellors who wished to sever ties with Thich Nhất Hạnh and the SYSS, accusing Chân Không of being a communist. From that point the SYSS struggled to raise funds and faced attacks on its members. The SYSS persisted in their relief efforts without taking sides in the conflict.

Nhất Hạnh returned to the US in 1966 to lead a symposium in Vietnamese Buddhism at Cornell University, and to continue his work for peace. While in the US, Nhất Hạnh stopped at Gethsemani Abbey to speak with Thomas Merton.When Vietnam threatened to block Nhất Hạnh’s re-entry to the country, Merton penned an essay of solidarity entitled “Nhat Hanh is my Brother”. He had written a letter to Martin Luther King, Jr. in 1965 entitled: “In Search of the Enemy of Man”. It was during his 1966 stay in the US that Nhất Hạnh met with King and urged him to publicly denounce the Vietnam War. In 1967, Dr. King gave a famous speech at the Riverside Church in New York City, his first to publicly question the U.S. involvement in Vietnam. Later that year, Dr. King nominated Nhất Hạnh for the 1967 Nobel Peace Prize. In his nomination Dr. King said, “I do not personally know of anyone more worthy of [this prize] than this gentle monk from Vietnam. His ideas for peace, if applied, would build a monument to ecumenism, to world brotherhood, to humanity”. The fact that King had revealed the candidate he had chosen to nominate and had made a “strong request” to the prize committee, was in sharp violation of the Nobel traditions and protocol. The committee did not make an award that year.

Nhất Hạnh moved to France and became the chair of the Vietnamese Buddhist Peace Delegation. When the Northern Vietnamese army took control of the south in 1975, he was denied permission to return to Vietnam. From 1976–1977 he led efforts to help rescue Vietnamese boat people in the Gulf of Siam, eventually stopping under pressure from the governments of Thailand and Singapore.

A CIA document from the Vietnam War has called Thích Nhất Hạnh a “brain truster” of Thich Tri Quang, the leader of a dissident group.

Nhất Hạnh created the Order of Interbeing in 1966. He heads this monastic and lay group, teaching Five Mindfulness Trainings and the Fourteen Precepts. In 1969 he established the Unified Buddhist Church (Église Bouddhique Unifiée) in France (not a part of the Unified Buddhist Church of Vietnam). In 1975 he formed the Sweet Potato Meditation Center. The center grew and in 1982 he and his colleague Chân Không founded Plum Village, a vihara in the Dordogne in the south of France.The Unified Buddhist Church is the legally recognized governing body for Plum Village in France, for Blue Cliff Monastery in Pine Bush, New York, the Community of Mindful Living, Parallax Press, Deer Park Monastery in California, Magnolia Village in Batesville, Mississippi, and the European Institute of Applied Buddhism in Waldbröl, Germany.

He established two monasteries in Vietnam, at the original Từ Hiếu Temple near Huế and at Prajna Temple in the central highlands. Thích Nhất Hạnh and the Order of Interbeing have established monasteries and Dharma centers in the United States at Deer Park Monastery (Tu Viện Lộc Uyển) in Escondido, California, Maple Forest Monastery (Tu Viện Rừng Phong) and Green Mountain Dharma Center (Ðạo Tràng Thanh Sơn) in Vermont and Magnolia Village Practice Center (Đạo Tràng Mộc Lan) in Mississippi, the second of which closed in 2007 and moved to the Blue Cliff Monastery in Pine Bush, New York . These monasteries are open to the public during much of the year and provide ongoing retreats for laypersons. The Order of Interbeing also holds retreats for specific groups of lay people, such as families, teenagers, veterans, the entertainment industry, members of Congress, law enforcement officers and people of color. Nhất Hạnh conducted a peace walk in Los Angeles in 2005, and again in 2007.