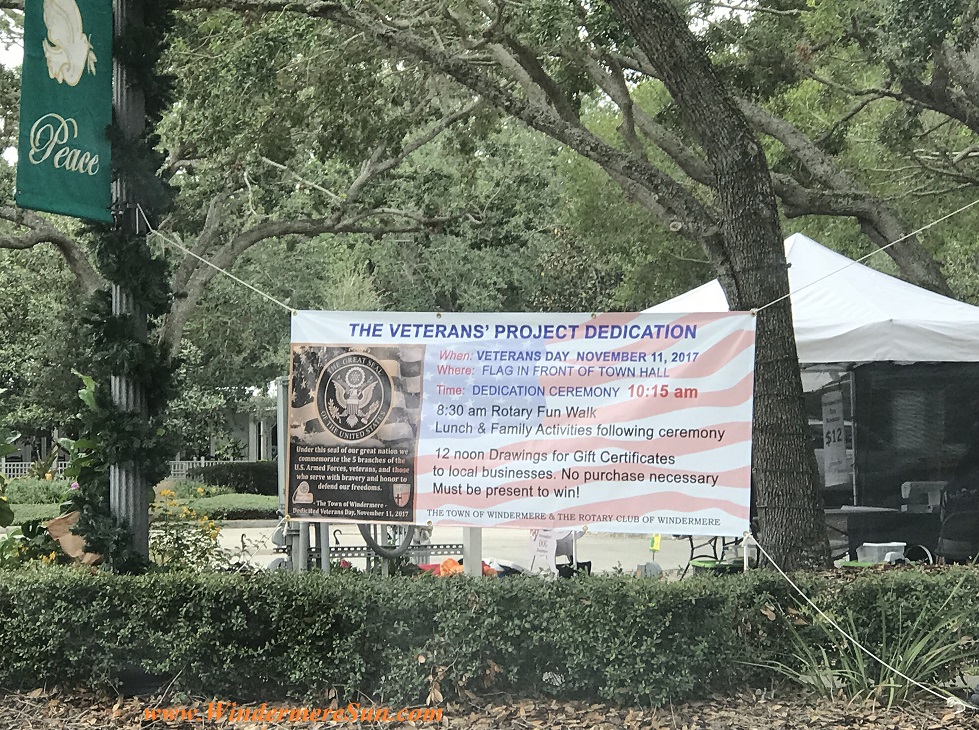 (Please click on red links & note magenta)
Folks, there will be much activities tomorrow, Saturday, Nov. 11, 2017, to celebrate The Veterans Day. Starting at 8:30 am., there will be the Rotary Fun Walk. Please keep in mind that the dedication ceremony for The Veteran’s Project will be on Saturday, Nov. 11, 2017, at 10:15 am, at the flag in front of the Town Hall, followed by lunch & family activities. Then at noon hour, there will be drawings for gift certificates to local businesses. No purchase necessary (must be present to win).

So come out to salute, honor,  and celebrate our veterans with rest of the town!

Below, you will find Veterans Day/Memorial Day Tribute:

To better understand the history of The Veterans Day, below, you will find the excerpt on the topic of Veterans Day from wikipedia, in italics:

Veterans Day is an official United States public holiday, observed annually on November 11, that honors military veterans; that is, persons who served in the United States Armed Forces. It coincides with other holidays, including Armistice Day and Remembrance Day, celebrated in other countries that mark the anniversary of the end of World War I; major hostilities of World War I were formally ended at the 11th hour of the 11th day of the 11th month of 1918, when the Armistice with Germany went into effect. The United States previously observed Armistice Day. The U.S. holiday was renamed Veterans Day in 1954.

Veterans Day is not to be confused with Memorial Day, a U.S. public holiday in May; Veterans Day celebrates the service of all U.S. military veterans, while Memorial Day honors those who died while in military service. It is also not to be confused with Armed Forces Day, a minor U.S. remembrance that also occurs in May, which specifically honors those currently serving in the U.S. military.

On November 11, 1919, U.S. President Woodrow Wilson issued a message to his countrymen on the first Armistice Day in which he expressed what he felt the day meant to Americans:

A year ago today our enemies laid down their arms in accordance with an armistice which rendered them impotent to renew hostilities, and gave to the world an assured opportunity to reconstruct its shattered order and to work out in peace a new and juster set of inter national relations. The soldiers and people of the European Allies had fought and endured for more than four years to uphold the barrier of civilization against the aggressions of armed force. We ourselves had been in the conflict something more than a year and a half. – With splendid forgetfulness of mere personal concerns, we re modeled our industries, concentrated our financial resources, increased our agricultural output, and assembled a great army, so that at the last our power was a decisive factor in the victory. We were able to bring the vast resources, material and moral, of a great and free people to the assistance of our associates in Europe who had suffered and sacrificed without limit in the cause for which we fought. Out of this victory there arose new possibilities of political freedom and economic concert. The war showed us the strength of great nations acting together for high purposes, and the victory of arms foretells the enduring conquests which can be made in peace when nations act justly and in furtherance of the common interests of men. To us in America the reflections of Armistice Day will be filled with – solemn pride in the heroism of those who died in the country’s service, and with gratitude for the victory, both because of the thing from which it has freed us and because of the opportunity it has given America to show her sympathy with peace and justice in the councils of nations.

The United States Congress adopted a resolution on June 4, 1926, requesting that President Calvin Coolidge issue annual proclamations calling for the observance of November 11 with appropriate ceremonies. A Congressional Act (52 Stat. 351; 5 U.S. Code, Sec. 87a) approved May 13, 1938, made the 11th of November in each year a legal holiday: “a day to be dedicated to the cause of world peace and to be thereafter celebrated and known as ‘Armistice Day’.”

In 1945, World War II veteran Raymond Weeks from Birmingham, Alabama, had the idea to expand Armistice Day to celebrate all veterans, not just those who died in World War I. Weeks led a delegation to Gen. Dwight Eisenhower, who supported the idea of National Veterans Day. Weeks led the first national celebration in 1947 in Alabama and annually until his death in 1985. President Reagan honored Weeks at the White House with the Presidential Citizenship Medal in 1982 as the driving force for the national holiday. Elizabeth Dole, who prepared the briefing for President Reagan, determined Weeks as the “Father of Veterans Day.”

U.S. Representative Ed Rees from Emporia, Kansas, presented a bill establishing the holiday through Congress. President Dwight D. Eisenhower, also from Kansas, signed the bill into law on May 26, 1954. It had been eight and a half years since Weeks held his first Armistice Day celebration for all veterans.

Congress amended the bill on June 1, 1954, replacing “Armistice” with “Veterans,” and it has been known as Veterans Day since.

Because it is a federal holiday, some American workers and many students have Veterans Day off from work or school. When Veterans Day falls on a Saturday then either Saturday or the preceding Friday may be designated as the holiday, whereas if it falls on a Sunday it is typically observed on the following Monday. A Society for Human Resource Management poll in 2010 found that 21 percent of employers planned to observe the holiday in 2011.

Non-essential federal government offices are closed. No mail is delivered. All federal workers are paid for the holiday; those who are required to work on the holiday sometimes receive holiday pay for that day in addition to their wages.

In his Armistice Day address to Congress, Wilson was sensitive to the psychological toll of the lean War years: “Hunger does not breed reform; it breeds madness,” he remarked. As Veterans Day and the birthday of the United States Marine Corps(November 10, 1775) are only one day apart, that branch of the Armed Forces customarily observes both occasions as a 96-hour liberty period.

Election Day is a regular working day, while Veterans Day, which typically falls the following week, is a federal holiday. Some people have called for the holidays to be merged, so citizens can have a day off to vote. They state this as a way to honor voting by exercising democratic rights.

While the holiday is commonly printed as Veteran’s Day or Veterans’ Day in calendars and advertisements (spellings that are grammatically acceptable), the United States Department of Veterans Affairs website states that the attributive (no apostrophe) rather than the possessive case is the official spelling “because it is not a day that ‘belongs’ to veterans, it is a day for honoring all veterans.“

Did you know: Veterans Day by the Numbers, below: