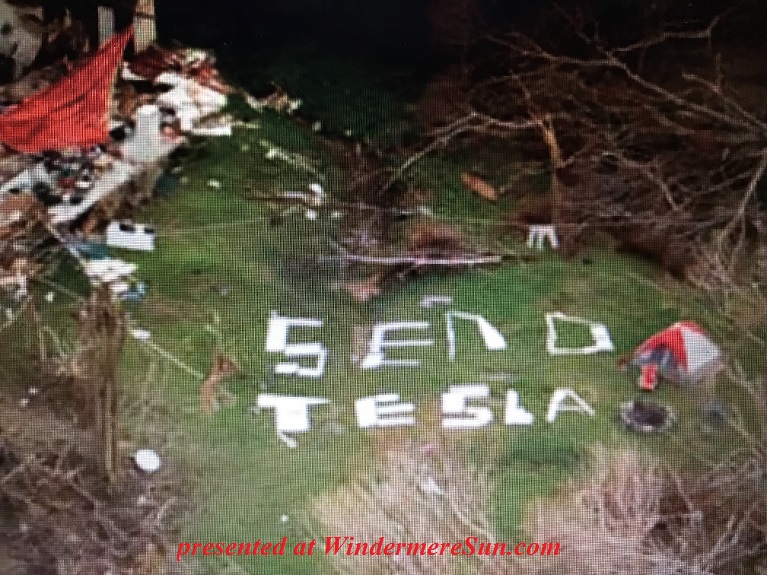 Within two weeks after Hurricane Irma swept over St. John (smallest of the three main U.S. Virgin Islands), a survivor used debris from a nearby home to spell out “SEND TESLA“. With significant loss of life, lack of drinking water, dehydration, food scarcity, and disappearing power grid in Puerto Rico, the humanitarian effort by Tesla stepping in to help was truly welcomed. Bloomberg reported that Tesla had been sending hundreds of its Powerwall battery systems to be paired with solar panels to help restore the power back to the battered island. The monumental destruction brought by hurricanes Irma and Maria on the U.S. Virgin Islands and Puerto Rico in September is opening up the possibilities for companies such as Tesla to move in and establish a presence. Tesla sent representatives to the island to begin signing up survivors for solar services.

The Tesla company had already built solar energy production and storage “powerpacks” in the American Samoa and Hawaii. In case of Hawaii’s Kauai’i island, in Jan. of 2015, 80% of the peak daytime power demand at Kaua’i was met by solar energy and 22% of the daily average was met by renewable energy. With the help from Tesla, KIUC (Kaua’i Island Utility Cooperative) is leading the way on planet earth in our transition toward Renewable Energy Age! You may also be interested in these articles below regarding KIUC:

Tesla indicated that some of the systems (Tesla Powerwall+Solar Panels) are already in Puerto Rico and others are on their way. Bloomberg also reported, “The company (Tesla) has employees on the ground to install them and is working with local organizations to identify locations.” The Puerto Rico island is still mostly without without power.

Thanks to Tesla for bringing power/electricity back to some of the people of Puerto Rico and U.S. Virgin Islands.

Mia Farrow’s Twitter further reminds us of the BBC report of 55% of the people in Puerto Rico are without drinking water. Hopefully, President Trump’s visit tomorrow (Tuesday, Oct. 3, 2017) to Puerto Rico will bring more attention, help, and water being dropped in by the U.S. National Guard to these Americans at Puerto Rico.