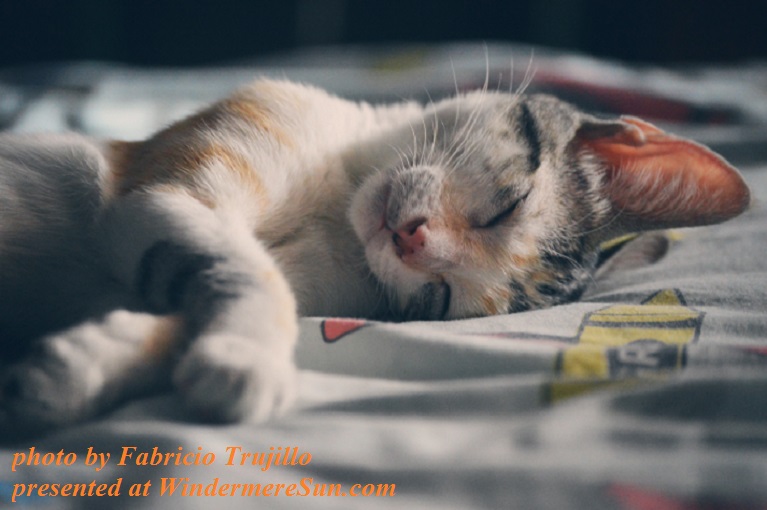 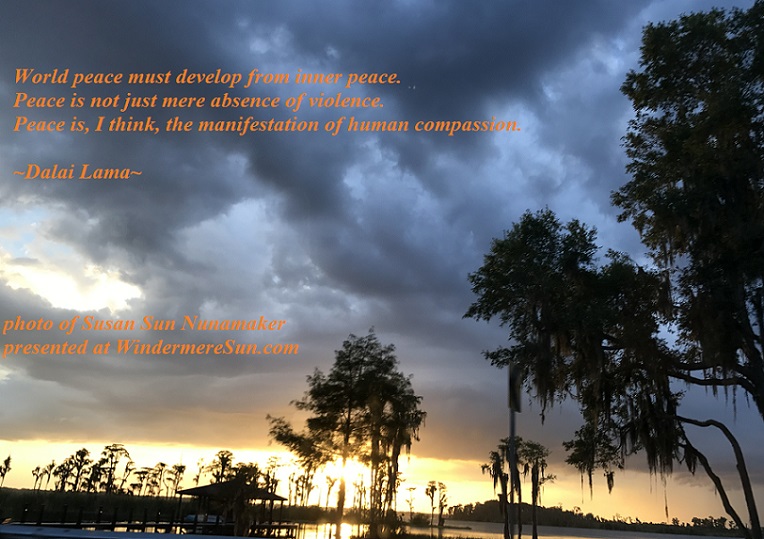 World peace must develop from inner peace. Peace is not just mere absence of violence. Peace is, I think, the manifestation of human compassion. (quote of Dalai Lama, photo of Susan Sun Nunamaker)

What perfect posture of relaxation and contentment…..perhaps this white orange and gray Tabby Cat just found out that the wind velocity at Windermere will be between 55-64 mph by the time Hurricane Irma reaches Central Florida…much more manageable than when Irma is in Southern Florida, about 150-185 mph.

For more about Tabby cat, excerpt from wikipedia, below:

A tabby is any domestic cat that has a coat featuring distinctive stripes, dots, lines or swirling patterns, usually together with a mark resembling an ‘M’ on its forehead. Tabbies are sometimes erroneously assumed to be a cat breed. In fact, the tabby pattern is found in many breeds, as well as among the general mixed-breed population. The tabby pattern is a naturally occurring feature that may be related to the coloration of the domestic cat’s direct ancestor, the African wildcat, which (along with the European wildcat and Asiatic wildcat) has a similar coloration.

World peace must develop from inner peace. Peace is not just mere absence of violence. Peace is, I think, the manifestation of human compassion. (quote of Dalai Lama, photo of Susan Sun Nunamaker)

Dalai Lama once remarked, “World peace must develop from inner peace. Peace is not just mere absence of violence. Peace is, I think, the manifestation of human compassion.”

For more about Dalai Lama, excerpt from wikipedia, in italics, below:

Dalai Lama /ˈdɑːlaɪ ˈlɑːmə/ (US); /ˌdælaɪ ˈlɑːmə/ (UK) (Standard Tibetan：ཏཱ་ལའི་བླ་མ་; Sanskrit: दलै लामा; Chinese: 达赖喇嘛) is a title given to spiritual leaders of the Tibetan people. They are monks of the Gelug or “Yellow Hat” school of Tibetan Buddhism, the newest of the schools of Tibetan Buddhism founded by Je Tsongkhapa. The Dalai Lama title was created by Altan Khan, the Prince of Shunyi granted by Ming Dynasty, in 1578. The 14th and current Dalai Lama is Tenzin Gyatso.

The Dalai Lama has always been an important figure of the Gelug tradition. Although finding dominance in Central Tibet, the Dalai Lama has been an important figure beyond sectarian boundaries. The Dalai Lama figure is important for many reasons. Since the time of the Fifth Dalai Lama his personage has always been a symbol of unification of the state of Tibet, where he has represented Buddhist values and traditions. This is significant, even though he had no formal or institutional roles in each religious tradition. He showed that the Buddhist values and traditions should be placed above the importance of any specific school. The Fifth Dalai Lama was granted a golden seal of authority and golden sheets for the exercise of leadership over Buddhism under the heaven by the Shunzhi Emperor of China.

The Dalai Lama is considered to be the successor in a line of tulkus who are believed to be incarnations of Avalokiteśvara, the Bodhisattva of Compassion, called Chenrezig in Tibetan. The name is a combination of the Mongolicword dalai meaning “ocean” or “big” (coming from Mongolian title Dalaiyin qan or Dalaiin khan, translated as ‘Gyatso’ in Tibetan) and the Tibetan word བླ་མ་ (bla-ma) meaning “master, guru”.

From 1642 until 1705, and from 1750 to the 1950s, the Dalai Lamas or their regents headed the Tibetan government (or Ganden Phodrang) in Lhasa which governed all or most of the Tibetan plateau with varying degrees of autonomy under the Qing Dynasty of China, up to complete sovereignty  which was rejected by both China and Republic of China. This government also enjoyed the patronage and protection of firstly Mongol kings of the Khoshut and Dzungar Khanates (1642–1720) and then of the emperors of the Manchu-led Qing dynasty (1720–1912)