What Should We Do About This “New Normal” 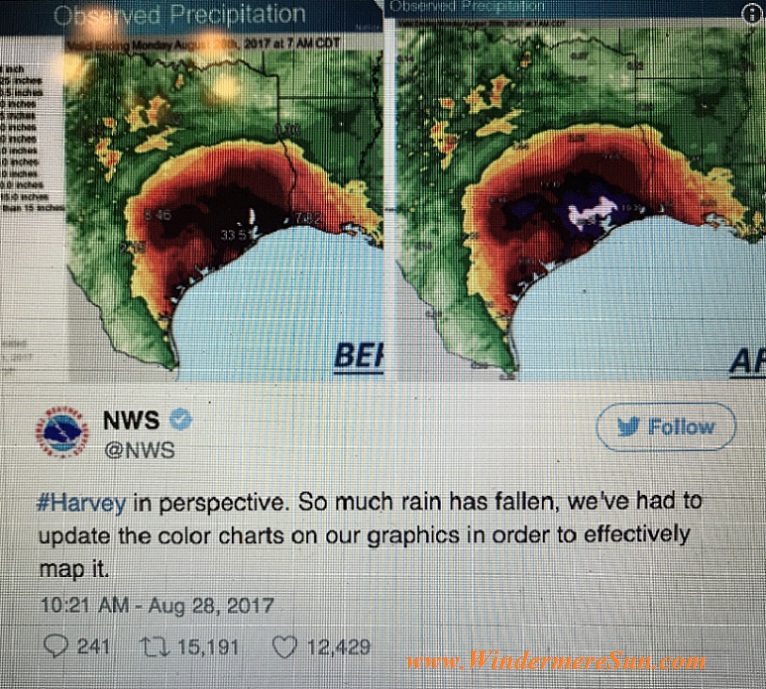 With water and massive damage of Hurricane Harvey continue to rise, and the death toll from the storm reaching 30, the National Weather Service (NWS) had to add a new color purple to indicate the unprecedented rainfall level that has occurred during the Storm/Hurricane Harvey since its landfall at Rockport, TX, on last Friday. NWS added two purple shades to its map because the old scale topped out at more than 15 inches while the new limit tops at 30 inches. Even though this is the most powerful storm that has hit Texas in more than 50 years and the worst flooding disaster in U.S. history, many experts and meteorologists believe that climate change will continue to fuel massive storms like Hurricane Harvey in the future. As Houston is experiencing its third 500-year flood in 3 years and 25 separate 500-year floods have occurred across the USA since 2010, it is conceivable that this will be our new normal.

Below, you will find an interview by Amy Goodman of Democracy Now and discussion with David Helvarg, Executive Director of Blue Frontier, an ocean conservation organization, on the subject of how climate change is fueling massive storms such as Hurricane Harvey.

David Helvarg comments that these flood zones will become more water logged as the sea level rises at Texas and Louisiana coast, South Florida, etc. The prediction is such that there may be about 3-6 feet or more of sea level rise in the coming decades, with the continuing global warming. The two 10,000 year rain events in two years is becoming the new normal. Despite the Trump administration’s denial of climate change, there are many measures that individual states and cities may take in helping to slow down the climate change: installing more renewables such as solar and wind, transitioning into electric vehicles, reducing food waste and increasing local food productions, recycling, reusing, reducing, etc.

There had been more than 1,200 people who died amid flooding in Bangladesh, Nepal, and India. This year’s monsoon season has brought torrential downpours that have submerged wide swaths of South Asia, destroying tens of thousands of homes, schools, and hospitals and affecting up to 40 million people. Aid organizations are warning that this is one of the worst regional humanitarian crises in years, with millions of people facing severe food shortages and disease caused by polluted flood water. Flood victims in southern Nepal say they have lost everything. Below, Amy Goodman of Democracy Now speaks with Asad Rehman, Executive Director of “War on Want“. Director Rehman has worked on climate change issues for over a decade.

To see what actions Central Floridians in Orlando (esp. Mayor Dyer and his team) have been pursuing in their effort to slow down the climate change, please view our previous post on Florida Climate Summit at Orlando in August, 2017. Perhaps you can also initiate and/or encourage people in your communities to transition into renewables such as solar and wind, electric vehicles, recycle, reuse,  reduce food waste and increase local food productions. Our home planet Earth is in need of our help. We need to slow down the climate change in order to prevent millions of people on earth becoming homeless.