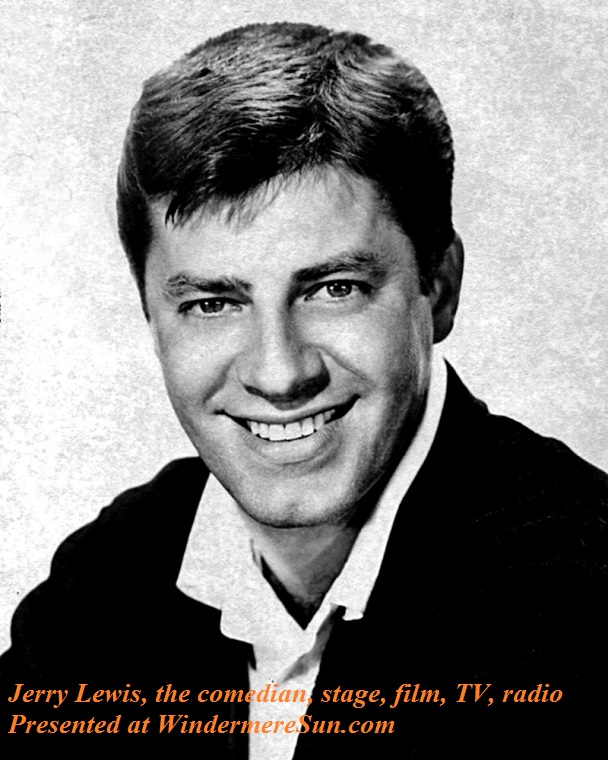 How many of you grew up with or have memory of the slapstick humor generated by the Dean Martin and Jerry Lewis team? I remember the first time I saw Jerry Lewis’ performance, I could not stop myself from laughing. He was the comedian who first introduced me to the concept of slapstick. So on this very special day, the last day of Jerry’s 91 years on earth, August 20, 2017, allow me to share some of his best moments below:

Information gathered from wikipedia on Jerry Lewis, in italics, below:Jerry Lewis (born Joseph or Jerome Levitch, depending on the source; March 16, 1926 – August 20, 2017) was an American actor, comedian, singer, film producer, film director, screenwriter, and humanitarian. He was known for his slapstick humor in film, television, stage and radio. He and Dean Martin were partners as the hit popular comedy duo of Martin and Lewis. Following that success, he was a solo star in motion pictures, nightclubs, television shows, concerts, album recordings, and musicals.

Lewis served as national chairman of the Muscular Dystrophy Association and hosted the live Labor Day Weekend broadcast of the Jerry Lewis MDA Telethon for 44 years. He received several awards for lifetime achievement from the American Comedy Awards, Los Angeles Film Critics Association, Venice Film Festival and Academy of Motion Picture Arts and Sciences, and was honored with two stars on the Hollywood Walk of Fame.

In 1969, Lewis agreed to lend his name to “Jerry Lewis Cinemas“, offered by National Cinema Corporation as a franchise business opportunity for those interested in theatrical movie exhibition. Jerry Lewis Cinemas stated that their theaters could be operated by a staff of as few as two with the aid of automation and support provided by the franchiser in booking film and other aspects of film exhibition. A forerunner of the smaller rooms typical of later multi-screen complexes, a Jerry Lewis Cinema was billed in franchising ads as a “mini-theatre” with a seating capacity of between 200 and 350. In addition to Lewis’s name, each Jerry Lewis Cinemas bore a sign with a cartoon logo of Lewis in profile. Initially 158 territories were franchised, with a buy-in fee of $10,000 or $15,000 depending on the territory, for what was called an “individual exhibitor“. For $50,000, Jerry Lewis Cinemas offered an opportunity known as an “area directorship“, in which investors controlled franchising opportunities in a territory as well as their own cinemas. The success of the chain was hampered by a policy of only booking second-run, family-friendly films. Eventually the policy was changed, and the Jerry Lewis Cinemas were allowed to show more competitive movies. but after a decade the chain failed and both Lewis and National Cinema Corporation declared bankruptcy in 1980.

In 2010, Lewis met with seven-year-old Lochie Graham, who shared his idea for “Jerry’s House“, a place for vulnerable and traumatized children. Lewis and Graham entered into a joint partnership for an Australian and a U.S.-based charity and began raising funds to build the facility in Melbourne, Australia.

May you rest in peace, Jerry, after decades of good work and laughter you have produced. We bid you farewell.