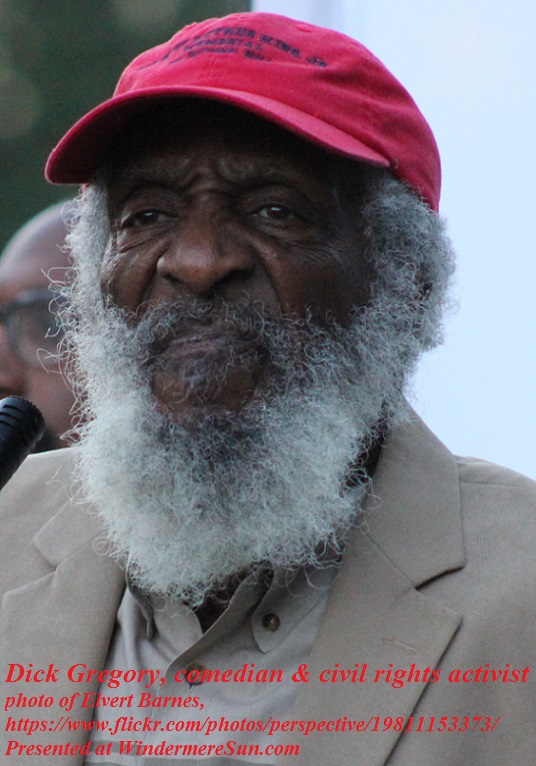 We lost another comedian this past week, Richard Claxton Gregory (aka Dick Gregory). Dick Gregory (Oct.12, 1932-Aug. 19, 2017) was an American civil rights activist, social critic, comedian, writer, entrepreneur, and occasional actor. He became a pioneer in stand-up comedy for his “no-holds-barred” (in which he mocks bigotry and racism) sets during the turbulent 1960’s. He primarily performed to black audiences at segregated clubs until 1961, when he became the first black comedian to successfully cross over to white audiences, appearing on television and putting out comedy record albums. He was politically active, protested against the Vietnam War and racial injustice. Dick Gregory was arrested multiple times and went on many hunger strikes. He later became a motivational speaker and author, mainly promoting spirituality. He passed away due to heart failure at a Washington, D.C. hospital at age 84 in August of 2017.

More on Dick Gregory’s Career, below, in italics:

Gregory began his career as a comedian while serving in the military in the mid-1950s. He served in the Army for a year and a half at Fort Hood in Texas, Fort Lee in Virginia, and Fort Smith in Arkansas. He was drafted in 1954 while attending Southern Illinois University. After being discharged in 1956, he returned to the university but did not receive a degree. He moved to Chicago with a desire to perform comedy professionally.

In 1958, Gregory opened the Apex Club nightclub in Illinois. The club failed and landed Gregory in financial hardship. In 1959, Gregory landed a job as master of ceremonies at the Roberts Show Club.

While working for the United States Postal Service during the daytime, Gregory performed as a comedian in small, primarily black-patronized nightclubs. He was one of the first black comedians to gain widespread acclaim while performing for white audiences. In an interview with The Huffington Post, Gregory described the history of black comics as limited: “Blacks could sing and dance in the white night clubs but weren’t allowed to stand flat-footed and talk to white folks, which is what a comic does.”

In 1961, Gregory was working at the black-owned Roberts Show Bar in Chicago when he was spotted by Hugh Hefner. Gregory was performing the following material before a largely white audience:

Good evening, ladies and gentlemen. I understand there are a good many Southerners in the room tonight. I know the South very well. I spent twenty years there one night.

Last time I was down South I walked into this restaurant and this white waitress came up to me and said, “We don’t serve colored people here.” I said, “That’s all right. I don’t eat colored people. Bring me a whole fried chicken.”

Then these three white boys came up to me and said, “Boy, we’re giving you fair warning. Anything you do to that chicken, we’re gonna do to you.” So I put down my knife and fork, I picked up that chicken and I kissed it. Then I said, “Line up, boys!”

Gregory attributed the launch of his career to Hefner. Based on his performance at Roberts Show Bar, Hefner hired Gregory to work at the Chicago Playboy Club as a replacement for comedian “Professor” Irwin Corey.

Gregory made his first television appearance on the late night show Tonight Starring Jack Paar. He soon began appearing nationally and on television.

Early in his career, Gregory was offered an engagement on Tonight Starring Jack Paar. Paar’s show was known for helping propel entertainers to the next level of their careers. At the time, black comics did perform on the show, but after their performances, they were never asked to stay and sit on the famous couch and talk with the host. Dick Gregory declined several invitations from Jack Paar to perform on the show. Paar finally called him to find out why he refused to perform on his show. In order to have Gregory perform, the producers eventually agreed to allow him to stay after his performance and talk with the host on air. This was a first in the show’s history. Gregory’s interview on Tonight Starring Jack Paar spurred conversations across America.