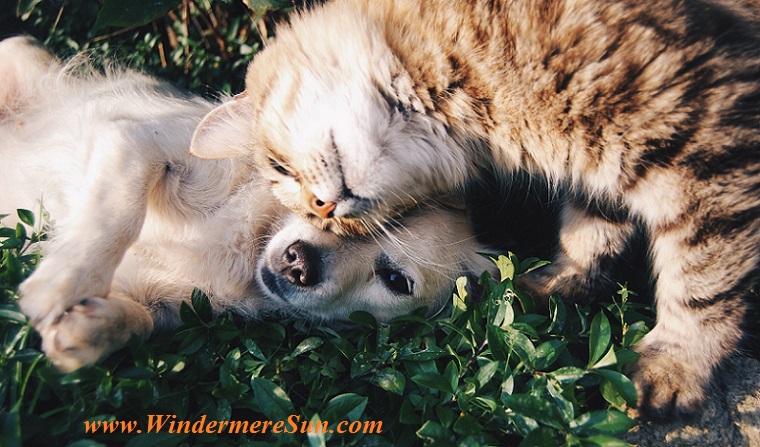 Dog and Cat Can Coexist (presented at WindermereSun.com) 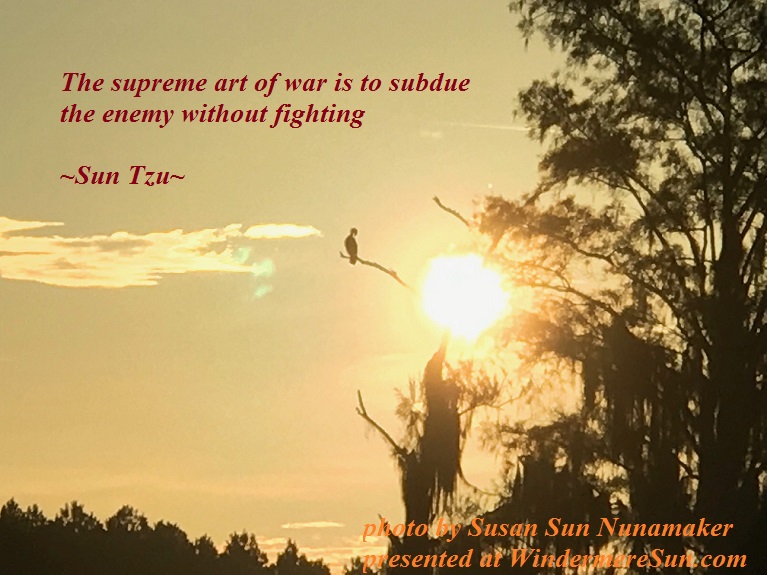 The Sumpreme Art of War Is To Subdue the Enemy Without Fighting (quote of Sun Tzu, photo of Susan Sun Nunamaker, presented at WindermereSun.com)

Dog and Cat Can Coexist (presented at WindermereSun.com)

If dogs and cats can coexist, don’t you think human should be able to give it a good try too?

The Sumpreme Art of War Is To Subdue the Enemy Without Fighting (quote of Sun Tzu, photo of Susan Sun Nunamaker, presented at WindermereSun.com)

Sun Tzu once told his students/disciples, “The supreme art of war is to subdue the enemy without fighting.”

To better understand and appreciate Sun Tzu, please view excerpts from wikipedia, in italics, below:

Sun Tzu (/ˌsuːnˈdzuː/; also rendered as Sun Zi 孙子) was a Chinese general, military strategist, and philosopher who lived in the Spring and Autumn period of ancient China. Sun Tzu is traditionally credited as the author of The Art of War, a widely influential work of military strategy that has affected both Western and Eastern philosophy. Aside from his legacy as the author of The Art of War, Sun Tzu is revered in Chinese and the Culture of Asia as a legendary historical figure. His birth name was Sun Wu, and he was known outside of his family by his courtesy name Changqing. The name Sun Tzu by which he is best known in the West is an honorific which means “Master Sun“.

Sun Tzu’s historicity is uncertain. Sima Qian and other traditional historians placed him as a minister to King Helü of Wu and dated his lifetime to 544–496 BC. Modern scholars accepting his historicity nonetheless place the existing text of The Art of War in the later Warring States period based upon its style of composition and its descriptions of warfare. Traditional accounts state that the general’s descendant Sun Bin also wrote a treatise on military tactics, also titled The Art of War. Since both Sun Wu and Sun Bin were referred to as Sun Tzu in classical Chinese texts, some historians believed them identical prior to the rediscovery of Sun Bin’s treatise in 1972.

Sun Tzu’s work has been praised and employed throughout East Asia since its composition. During the twentieth century, The Art of War grew in popularity and saw practical use in Western society as well. It continues to influence many competitive endeavors in Asia, Europe, and America including culture, politics, business, and sports, as well as modern warfare.

The Art of War is traditionally ascribed to Sun Tzu. It presents a philosophy of war for managing conflicts and winning battles. It is accepted as a masterpiece on strategy and has been frequently cited and referred to by generals and theorists since it was first published, translated, and distributed internationally.

There are numerous theories concerning when the text was completed and concerning the identity of the author or authors, but archeological recoveries show The Art of War had taken roughly its current form by at least the early Han. Because it is impossible to prove definitively when the Art of War was completed before this date, the differing theories concerning the work’s author or authors and date of completion are unlikely to be completely resolved. Some modern scholars believe that it contains not only the thoughts of its original author but also commentary and clarifications from later military theorists, such as Li Quan and Du Mu.

Of the military texts written before the unification of China and Shi Huangdi‘s subsequent book burning in the second century BC, six major works have survived. During the much later Song dynasty, these six works were combined with a Tang text into a collection called the Seven Military Classics. As a central part of that compilation, The Art of War formed the foundations of orthodox military theory in early modern China. Illustrating this point, the book was required reading to pass the tests for imperial appointment to military positions.

Sun Tzu’s Art of War uses language that may be unusual in a Western text on warfare and strategy. For example, the eleventh chapter states that a leader must be “serene and inscrutable” and capable of comprehending “unfathomable plans”. The text contains many similar remarks that have long confused Western readers lacking an awareness of the East Asian context. The meanings of such statements are clearer when interpreted in the context of Taoist thought and practice. Sun Tzu viewed the ideal general as an enlightened Taoist master, which has led to The Art of War being considered a prime example of Taoist strategy.

The book has also become popular among political leaders and those in business management. Despite its title, The Art of War addresses strategy in a broad fashion, touching upon public administration and planning. The text outlines theories of battle, but also advocates diplomacy and the cultivation of relationships with other nations as essential to the health of a state.

On April 10, 1972, the Yinqueshan Han Tombs were accidentally unearthed by construction workers in Shandong. Scholars uncovered a collection of ancient texts written on unusually well-preserved bamboo slips. Among them were The Art of War and Sun Bin‘s Military Methods. Although Han dynasty bibliographies noted the latter publication as extant and written by a descendant of Sun, it had previously been lost. The rediscovery of Sun Bin’s work is regarded as extremely important by scholars, both because of Sun Bin’s relationship to Sun Tzu and because of the work’s addition to the body of military thought in Chinese late antiquity. The discovery as a whole significantly expanded the body of surviving Warring States military theory. Sun Bin’s treatise is the only known military text surviving from the Warring States period discovered in the twentieth century and bears the closest similarity to The Art of War of all surviving texts.