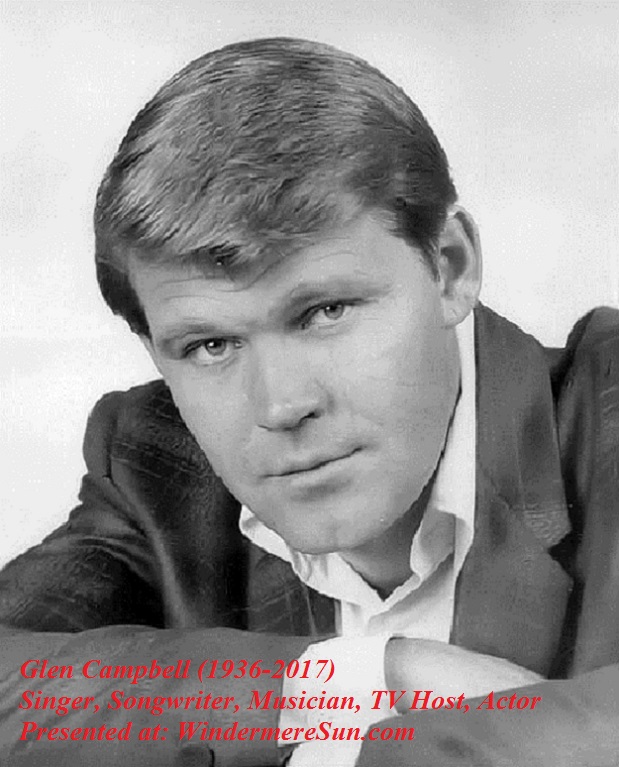 Those of us who grew up in the U.S. during 60’s-80’s would undoubtedly remember a gentler time, in speech, manner, as well as in its music. On August 8, 2017, Glen Campbell, best remembered for his guitar and melodic  country music reflecting this time (“Gentle on My Mind” “Rhinestone Cowboy”, “By the Time I Get to Phoenix”, “Wichita Lineman,” “Galveston,” “Southern Nights,” etc.), passed away at age 81, of Alzheimer.  His life is documented in the 2014 documentary Glen Campbell: I’ll Be Me. The film featured the last song Campbell recorded, “I’m Not Gonna Miss You,” which was written about Campbell’s struggle with Alzheimer’s.

After Glen Campbell was diagnosed with Alzheimer in 2011, he started to prepare for his final good-bye for his music fans. Adios is the 64th and final studio album by this iconic singer-songwriter, Glen Campbell, recorded between 2012-2013, in Nashville. Two months after the release of Adios on June 9, 2017, Campbell died on August 8, 2017.
Below, excerpt from wikipedia, on Glen Campbell, in italics:
Glen Travis Campbell (April 22, 1936 – August 8, 2017) was an American singer, songwriter, musician, television host, and actor. He is best known for a series of hits in the 1960s and 1970s, and for hosting a music and comedy variety show called The Glen Campbell Goodtime Hour on CBS television, from January 1969 through June 1972. During his 50 years in show business, he sold 45 million records and accumulated 12 RIAA gold albums, four platinum albums, and one double-platinum album. He placed a total of 80 different songs on either the Billboard Country Chart, Billboard Hot 100, or Adult Contemporary Chart, of which 29 made the top 10 and of which nine reached number one on at least one of those charts. Campbell’s hits include his recordings of John Hartford‘s “Gentle on My Mind“; Jimmy Webb‘s “By the Time I Get to Phoenix“, “Wichita Lineman“, and “Galveston“; Larry Weiss‘s “Rhinestone Cowboy“; and Allen Toussaint‘s “Southern Nights“.

Campbell made history in 1967 by winning four Grammys in the country and pop categories. For “Gentle on My Mind”, he received two awards in country and western, “By the Time I Get to Phoenix” did the same in pop. Three of his early hits later won Grammy Hall of Fame Awards (2000, 2004, 2008), while Campbell himself won the Grammy Lifetime Achievement Award in 2012. He owns trophies for Male Vocalist of the Year from both the Country Music Association (CMA) and the Academy of Country Music (ACM), and took the CMA’s top award as 1968 Entertainer of the Year. Campbell appeared as a supporting role in the film True Grit (1969), which earned him a Golden Globe nomination for Most Promising Newcomer. Campbell also sang the title song, which was nominated for an Academy Award.

There are few musicians whose voice have aged as well as Glen Campbell’s, I wonder if it is due to his gentle music.There is no better way to remember his life than to remember his music. Allow me to share his music and voice with you, below:

Below, excerpt from songfacts, in italics:

Bluegrass musician Carl Jackson produced the Adios album. The title track was recorded after Campbell’s 2011-2012 Goodbye Tour and Jackson explained to Rolling Stone how he worked with the stricken star.

“I stood right beside him on every line, printed out the lyrics in big print,” Jackson said. “Sometimes we had to do a line at a time because with Alzheimer’s, his memory of the lyrics, as we saw in the tour he had to use teleprompters, that went away pretty quick. But his melodies did not go away for a long time after his ability to remember actual songs. He would even remember what keys he did them in. I can’t explain it.”

A life well lived. May we always remember his music, reflection of a gentler time.