Imprinting/Do Not Go Where The Path May Lead…. 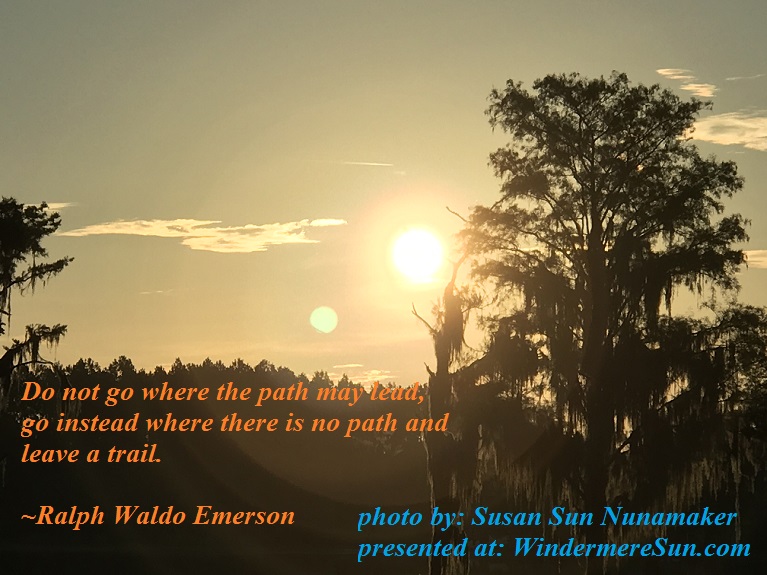 “Do not go where the path may lead, go instead where there is no path and leave a trail.” (quote by: Ralph Ealdo Emerson, photo by: Susan Sun Nunamaker, presented at: WindermereSun.com) 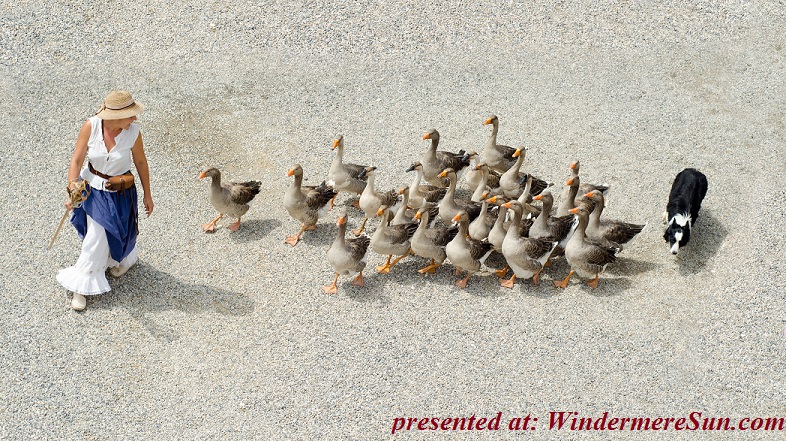 Ever heard of imprinting? (photo made available by skitterphoto.com, presented at: WindermereSun.com)

Ever heard of imprinting? (photo made available by skitterphoto.com, presented at: WindermereSun.com)

Ever heard of Imprinting? Information on Imprinting, gathered from wikipedia, in italics, below:

In psychology and ethology, imprinting is any kind of phase-sensitive learning (learning occurring at a particular age or a particular life stage) that is rapid and apparently independent of the consequences of behavior. It was first used to describe situations in which an animal or person learns the characteristics of some stimulus, which is therefore said to be “imprinted” onto the subject. Imprinting is hypothesized to have a critical period.

The best-known form of imprinting is filial imprinting, in which a young animal acquires several of its behavioral characteristics from its parent. It is most obvious in nidifugous birds, which imprint on their parents and then follow them around. It was first reported in domestic chickens, by the 19th-century amateur biologist Douglas Spalding. It was rediscovered by the early ethologist Oskar Heinroth, and studied extensively and popularized by his disciple Konrad Lorenz working with greylag geese.

Lorenz demonstrated how incubator-hatched geese would imprint on the first suitable moving stimulus they saw within what he called a “critical period” between 13–16 hours shortly after hatching. For example, the goslings would imprint on Lorenz himself (to be more specific, on his wading boots), and he is often depicted being followed by a gaggle of geese who had imprinted on him. Lorenz also found that the geese could imprint on inanimate objects. In one experiment, they followed a box placed on a model train in circles around the track. Filial imprinting is not restricted to non-human animals that are able to follow their parents, however.

The filial imprinting of birds was a primary technique used to create the movie Winged Migration (Le Peuple Migrateur), which contains a great deal of footage of migratory birds in flight. The birds imprinted on handlers, who wore yellow jackets and honked horns constantly. The birds were then trained to fly along with a variety of aircraft, primarily ultralights.

Sexual imprinting is the process by which a young animal learns the characteristics of a desirable mate. For example, male zebra finches appear to prefer mates with the appearance of the female bird that rears them, rather than that of the birth parent when they are different.

Sexual attraction to humans can develop in non-human mammals or birds as a result of sexual imprinting when reared from young by humans. One example is London Zoo female giant panda Chi Chi. When taken to Moscow Zoo for mating with the male giant panda An An, she refused his attempts to mate with her, but made a full sexual self-presentation to a zookeeper.

“Do not go where the path may lead, go instead where there is no path and leave a trail.” (quote by: Ralph Ealdo Emerson, photo by: Susan Sun Nunamaker, presented at: WindermereSun.com)

Ralph Waldo Emerson (May 25, 1803 – April 27, 1882) was an American essayist, lecturer, and poet who led the transcendentalist movement of the mid-19th century. He was seen as a champion of individualism and a prescient critic of the countervailing pressures of society, and he disseminated his thoughts through dozens of published essays and more than 1,500 public lectures across the United States. He once commented, “Do not go where the path may lead, go instead where there is no path and leave a trail.” Information gathered from wikipedia on Ralph Waldo Emerson, in italics, below:

Emerson gradually moved away from the religious and social beliefs of his contemporaries, formulating and expressing the philosophy of transcendentalism in his 1836 essay “Nature“. Following this work, he gave a speech entitled “The American Scholar” in 1837, which Oliver Wendell Holmes Sr. considered to be America’s “intellectual Declaration of Independence”.

Emerson wrote most of his important essays as lectures first and then revised them for print. His first two collections of essays, Essays: First Series (1841) and Essays: Second Series (1844), represent the core of his thinking. They include the well-known essays “Self-Reliance“, “The Over-Soul“, “Circles“, “The Poet” and “Experience“. Together with “Nature“, these essays made the decade from the mid-1830s to the mid-1840s Emerson’s most fertile period.

Emerson wrote on a number of subjects, never espousing fixed philosophical tenets, but developing certain ideas such as individuality, freedom, the ability for mankind to realize almost anything, and the relationship between the soul and the surrounding world. Emerson’s “nature” was more philosophical than naturalistic: “Philosophically considered, the universe is composed of Nature and the Soul”. Emerson is one of several figures who “took a more pantheist or pandeist approach by rejecting views of God as separate from the world.”

He remains among the linchpins of the American romantic movement, and his work has greatly influenced the thinkers, writers and poets that followed him. When asked to sum up his work, he said his central doctrine was “the infinitude of the private man.” Emerson is also well known as a mentor and friend of Henry David Thoreau, a fellow transcendentalist.