Trump Is Backing Reduction of Immigration 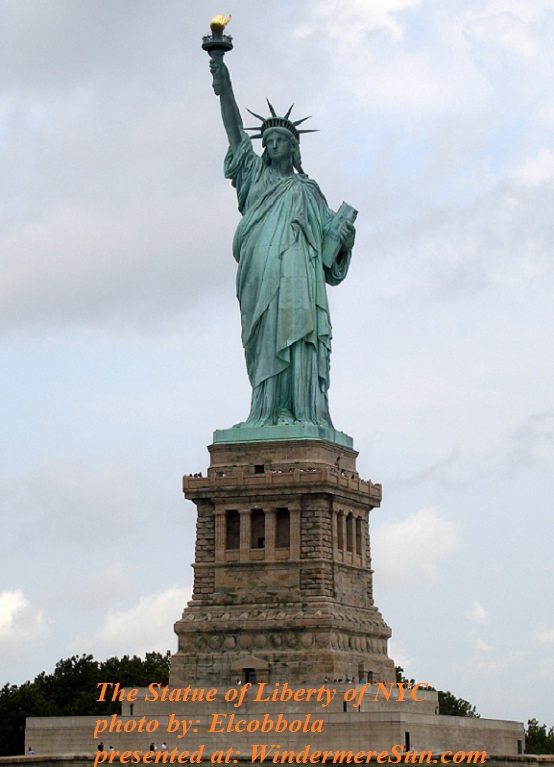 The Statue of Liberty in New York City (photo by: Elcobbola, presented at: WindermereSun.com) 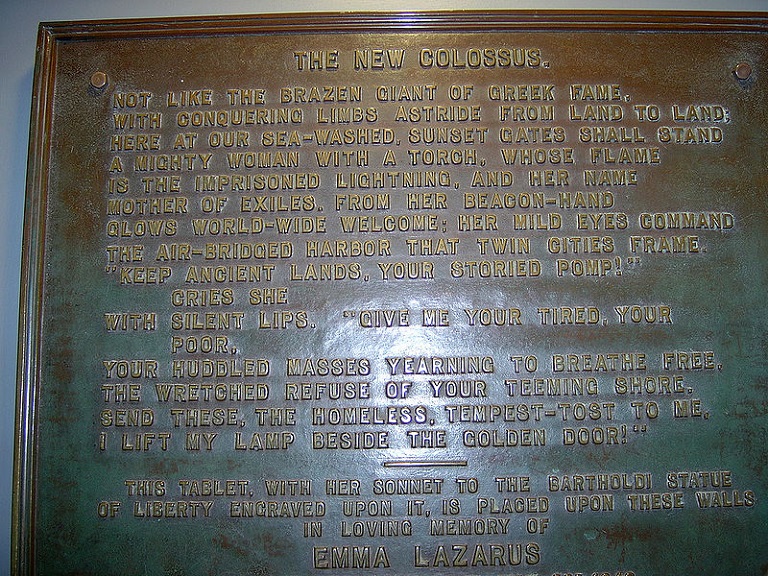 Plaque of The New Colossus poem by Emma Lazarus (Mother of Exiles) in the museum inside the pedestal of the Statue of Liberty, plaque was erected in 1903, photo by: melanzane, presented at: WindermereSun.com) 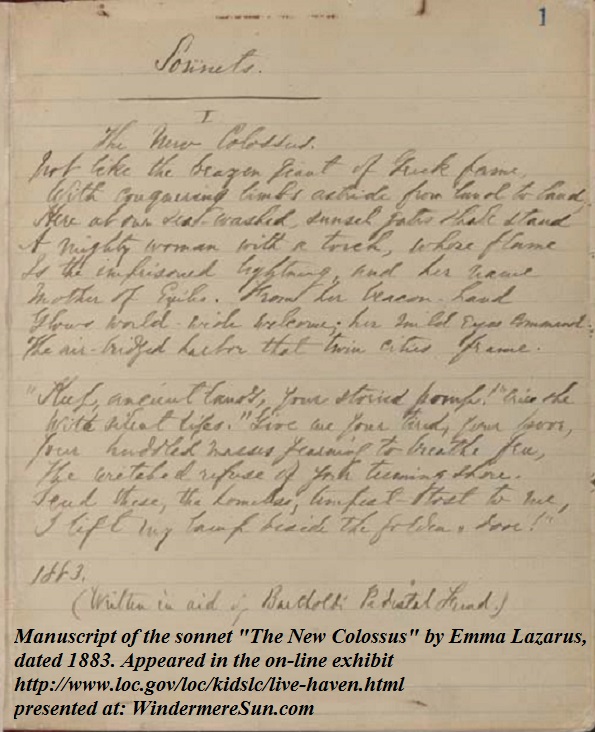 English: Manuscript of the sonnet “The New Colossus” by Emma Lazarus, dated 1883. Appeared in the on-line exhibit http://www.loc.gov/loc/kidslc/live-haven.html , presented at: WindermereSun.com

Historically, immigrants have frequently been a scapegoat whenever the economies are on decline,  jobs or business opportunities are limited, or security is uncertain. President Donald Trump’s election promise of building a wall along the Mexican border was based on the notion that there are too many immigrants taking over Americans’ jobs (but they’re not) and are committing disproportionate rate of crimes (but they do not).

As a matter of fact, there are plenty of evidence supporting the fact that immigrants actually promote economic growth and stability of the American society. In addition to all of the founding fathers of America who were immigrants to this land of ours, there have been plenty of examples of immigrants to USA who brought much to our world. To name a few: Albert Einstein, Ieoh Ming Pei, Madeleine Albright, John Muir, Joseph Pulitzer, Felix Frankfurter, Hakeem Olajuwon, Martina Navratilova, Subranhmanyan Chandrasekhar, Irving Berlin, Edward M. Bannister, Saint Frances X. Cabrini, “Mother” Mary Harris Jones, Rita M. Rodriguez, David Ho, Ang Lee, Arnold Schwarzenegger, Elon Musk, etc.


On Wednesday, August 2, 2017, President Donald Trump supported the legislation by David Perdue and Tom Cotton to reduce the level of legal immigration by about half into the United States by proposing a skills-based immigration system. This plan is currently facing skepticism from both Republicans and Democrats. Even though the point-system is a good recommendation, the skills-based immigration system really does not require reduction of immigrants. More importantly, most of the state legislators are familiar with the history of our nation, and its path to the strength and prosperity because of immigrants. If there will be such a dramatic reduction of legal immigrants coming into the USA, comes with it, the diminished creativity, hope, and freedom that had been so much a part of our DNA,

To help better understand the foundation upon which our nation was based on, I cannot think of any literature better than the poem/sonnet of The New Colossus to express the sentiment for those of us who appreciate the unique nature of America. “The New Colossus” is a sonnet that American poet Emma Lazarus (1849–1887) wrote in 1883 to raise money for the construction of the pedestal of the Statue of Liberty. In 1903, the poem was engraved on a bronze plaque and mounted inside the pedestal’s lower level, shared below, in italics:

Not like the brazen giant of Greek fame,
With conquering limbs astride from land to land;
Here at our sea-washed, sunset gates shall stand
A mighty woman with a torch, whose flame
Is the imprisoned lightning, and her name
MOTHER OF EXILES. From her beacon-hand
Glows world-wide welcome; her mild eyes command
The air-bridged harbor that twin cities frame.

“Keep, ancient lands, your storied pomp!” cries she
With silent lips. “Give me your tired, your poor,
Your huddled masses yearning to breathe free,
The wretched refuse of your teeming shore.
Send these, the homeless, tempest-tost to me,
I lift my lamp beside the golden door!”

The title of the poem and the first two lines refer to the Colossus of Rhodes, which was one of the Seven Wonders of the Ancient World, sometimes described as standing astride the harbor.

The “sea-washed, sunset gates” are the mouths of the Hudson and East Rivers, to the west of Brooklyn. The “imprisoned lightning” refers to the electric light in the torch, then a novelty.

The “air-bridged harbor that twin cities frame” refers to New York Harbor between New York City and Brooklyn, which were consolidated into one unit in 1898, 15 years after the poem was written.

The “huddled masses” are the many immigrants coming to the United States (many of them through Ellis Island at the port of New York).