Have You Ever Seen A Rain Bomb?

Illustration of a microburst by a NASA artist, the air moves in a downward motion until it hits ground level. It then spreads outward in all directions. (presented at: WindermereSun.com) 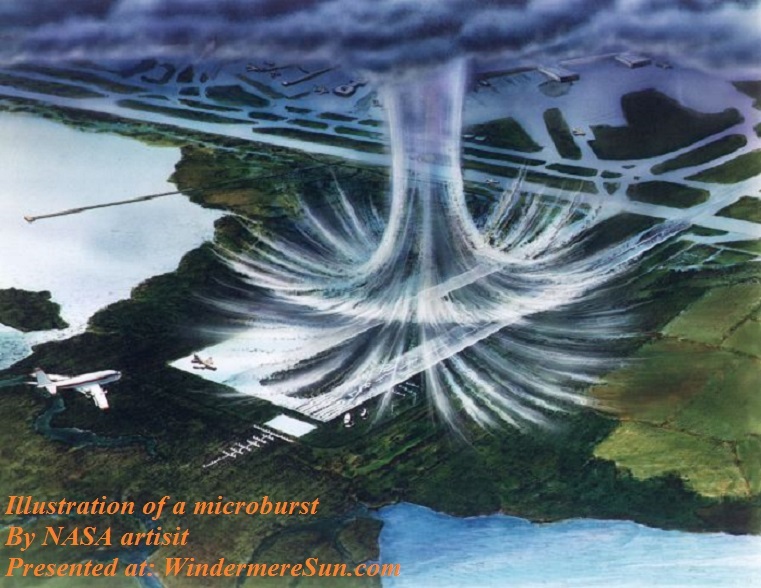 Illustration of a microburst by a NASA artist, the air moves in a downward motion until it hits ground level. It then spreads outward in all directions. (presented at: WindermereSun.com)


During the writing of our previous post on Tropical Storm Emily Is Moving Through Florida, I came across an  unfamiliar terms: rain bombs. I thought perhaps I’d share my findings regarding this term with you all.

According to wikipedia, rain bomb is a wet microburst or macroburst; a downdraft produced by a thunderstorm.

A microburst is a small downdraft that moves in a way opposite to a tornado. Microbursts are found in strong thunderstorms.There are two types of microbursts within a thunderstorm: wet microbursts and dry microbursts. They go through three stages in their cycle, the downburst, outburst, and cushion stages. A microburst can be particularly dangerous to aircraft, especially during landing, due to the wind shear caused by its gust front. Several fatal and historic crashes have been attributed to the phenomenon over the past several decades, and flight crew training goes to great lengths on how to properly recover from a microburst/wind shear event. A microburst often has high winds that can knock over fully grown trees. They usually last from a couple of seconds to several minutes.

The term was defined by mesoscale meteorology expert Ted Fujita as affecting an area 4 km (2.5 mi) in diameter or less, distinguishing them as a type of downburst and apart from common wind shear which can encompass greater areas. Fujita also coined the term macroburst for downbursts larger than 4 km (2.5 mi). A distinction can be made between a wet microburst which consists of precipitation and a dry microburst which typically consists of virga. They generally are formed by precipitation-cooled air rushing to the surface, but they perhaps also could be powered from the high speed winds of the jet stream deflected toward the surface by a thunderstorm or by dynamical processes (see rear flank downdraft).

Wet microbursts (aka rainn bombs) are downbursts accompanied by significant precipitation at the surface which are warmer  than their environment (Wakimoto, 1998). These downbursts rely more on the drag of precipitation for downward acceleration of parcels than negative buoyancy which tend to drive “dry” microbursts. As a result, higher mixing ratios are necessary for these downbursts to form (hence the name “wet” microbursts). Melting of ice, particularly hail, appears to play an important role in downburst formation (Wakimoto and Bringi, 1988), especially in the lowest 1 km (0.62 mi) above ground level (Proctor, 1989). These factors, among others, make forecasting wet microbursts difficult.