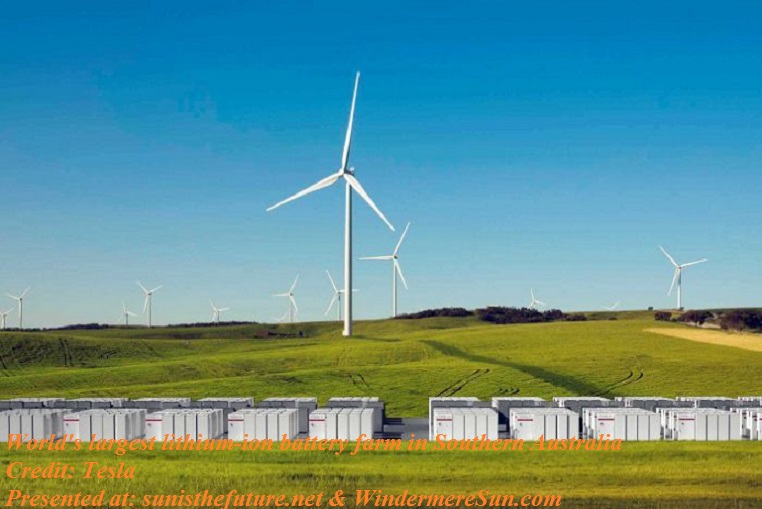 (Please click on red links & note magenta)
Elon Musk has followed through with his promise to solve the growing energy crisis in South Australia in 100 days! Tesla (TSLA) cofounder and energy division head Lyndon Rive boldly claimed, back in March of 2017, that he would commit to installing the 100-300 megawatt hours of battery required to prevent the increasingly frequent blackouts of South Australia within 100 days. He said the company could do the same in Victoria, where the closure of the 1600 MW Hazelwood coal plant in March was raising more fears of increasing blackouts across the eastern states electricity market next summer, following a near blackout in NSW on February 10 after an unexpected spike in demand due to a heat wave. Musk upped the ante by not only backing Rive’s claim but also insisting that if the 100 MWh of battery system would not be installed within 100-day window, he (Musk) would offer the service completely free of charge. When the billionaire-entrepreneur Mike Cannon-Brookes asked Musk in March, if Tesla was serious when it claimed it could quickly end blackouts in South Australia,”Tesla will get the system installed and working 100 days from contract signature or it is free. That serious enough for you?” Musk tweeted at the time. 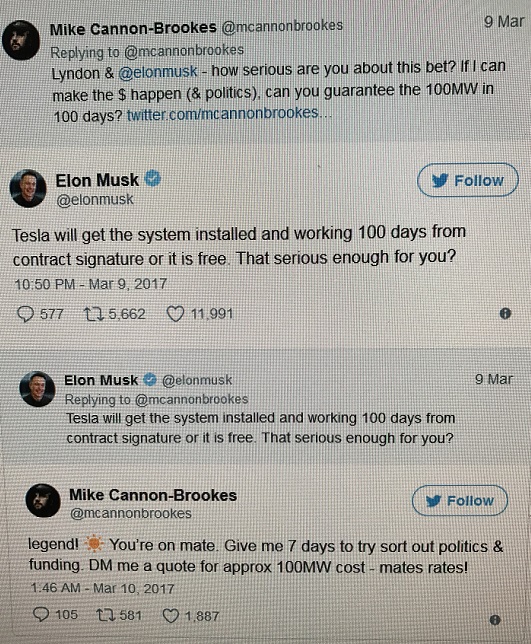 Tweets to Elon Musk from Australia (presented at WindermereSun.com)

To solve South Australia’s energy crisis, Tesla (TSLA) has teamed up with French renewable energy firm Neoen and an Australian state government (with a South Australian company CPP doing the ground work) to install the world’s largest lithium ion battery farm. Paired up with Neoen’s existing Hornsdale Wind Farm in the state of South Australia, near Jamestown, north of Adelaide, the battery farm will have three times the capacity as the next biggest in the world. South Australia Premier Jay Weatherill said this extraordinary collaboration would deliver a grid-scale battery that would “stabilize the South Australian network as well as putting downward pressure on prices. Battery storage is the future of our national energy market, and the eyes of the world will be following our leadership in this space.” The project is intended to sustain 100 MW of power and store 129 MWh, being able to power about 30,000 homes, according to Tesla. The project is currently slated for completion by December to harness the existing Hornsdale Wind Farm to charge the mega-battery while the wind is blowing and discharge power when it is most needed. Musk commented, “It’s a fundamental efficiency improvement to the power grid, and it’s really quite necessary and quite obvious considering a renewable energy future.” In essence, by storing renewable (wind and solar) energy during off-peak hours and then discharging that energy during peak hours, utility companies are able to cut costs, improve reliability and resiliancy, and reduce reliance on non-renewable energy sources.

Tesla was able to beat the other 91 international bidders for this project. It is understandable, for the company has made substantial progress in the utility front since introducing Powerwall and Powerpack about two years ago. Tesla now supplies energy to the Hawaiian Island of Kauai using a large solar energy plant running on the Powerpack technology. Medium size businesses are also turning to Tesla tech for energy storage, including the Sierra Nevada Brewing Co., Southern California Edison’s Mira Loma substation in Ontario, California powering 15,000 homes. So, while the South Australia project may have an ambitious timetable, Tesla’s impressive resume suggests that the 100-day goal should not be a problem for Tesla. 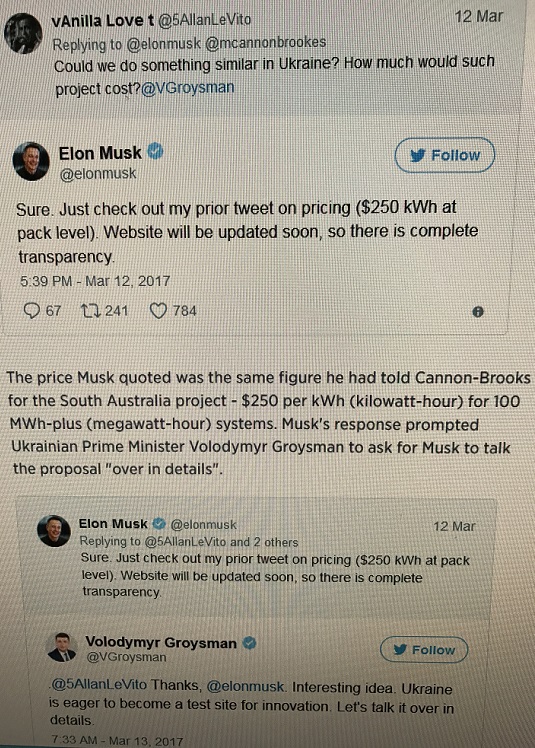 tweets to Elon Musk from Ukraine (presented at WindermereSun.com)

In the meantime, rumor has it that citizens from other countries have also taken to social media to ask Musk for help. A user by the same of @5AllanLeVito asked Musk to bring a similar project to Ukraine, above. Musk’s response “Sure”, and laid out the cost. New Zealand and others may soon to follow. Thank goodness for new technology Twitter: much will be accomplished within much shorter period of time! Hurray for the renewable future! Hurray for America’s adopted son, Elon Musk, in his progress/effort in saving our planet earth!

Perhaps the Floridians should start tweeting Elon Musk for our battery system!