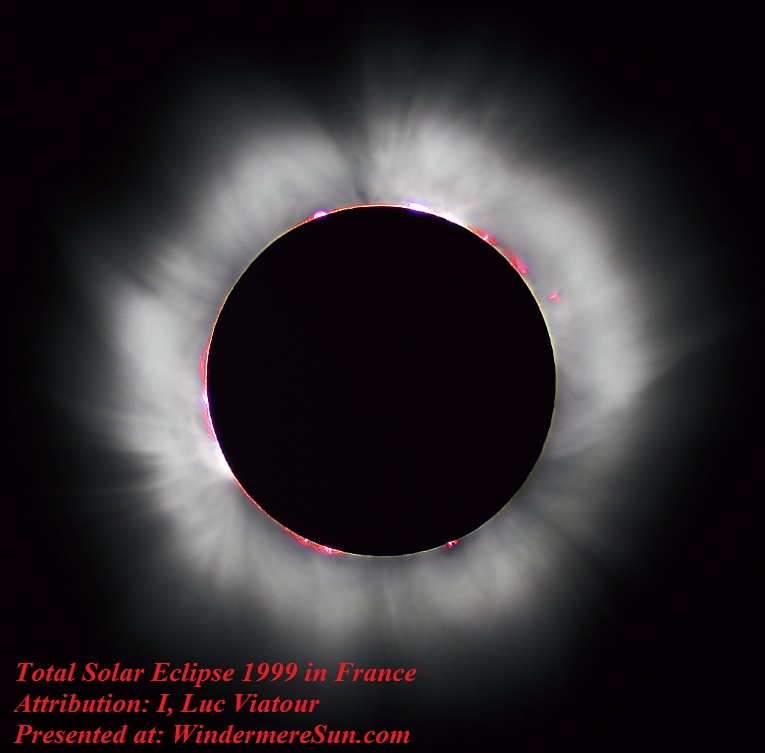 A total solar eclipse occurs when the Moon completely covers the Sun’s disk, as seen in this 1999 solar eclipse. Solar prominences can be seen along the limb (in red) as well as extensive coronal filaments.(Photo Attribution: I, Luc Viatour, Presented at: WindermereSun.com) 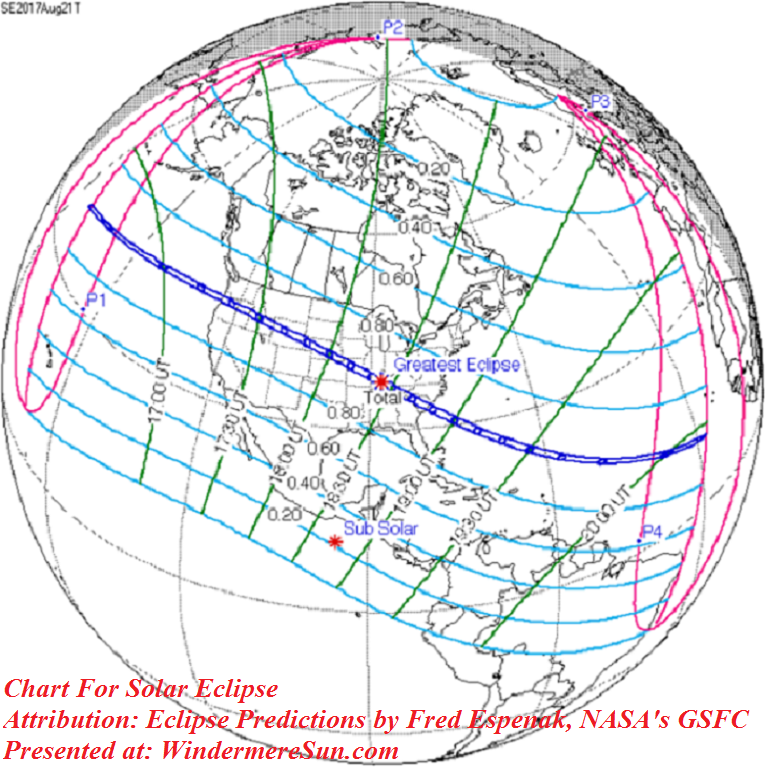 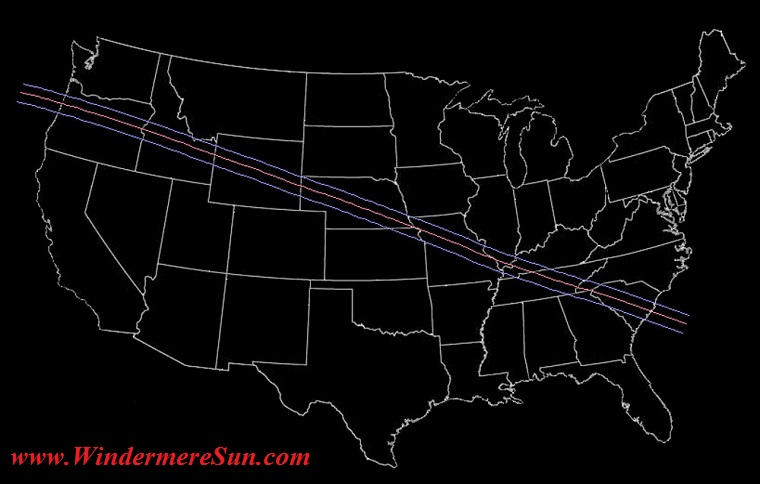 How many of you have “observing a Total Solar Eclipse” on your bucket list? Did you know that a total solar eclipse will occur on Monday, August 21, 2017? It will be visible in totality only within a band across the entire contiguous United States ( covering: Oregon, Idaho, Montana, Wyoming, Nebraska, Kansas, Iowa, Missouri, Illinois, Kentucky, Tennessee, Georgia, North Carolina, South Carolina). The last time a total solar eclipse was visible across the entire contiguous United States was during the June 8, 1918 eclipse.

A solar eclipse occurs when the Moon passes between Earth and the Sun, thereby totally or partly obscuring the image of the Sun for a viewer on Earth. A total solar eclipse occurs when the Moon’s apparent diameter is larger than the Sun’s, blocking all direct sunlight, turning day into darkness. Totality occurs in a narrow path across Earth’s surface, with the partial solar eclipse visible over a surrounding region thousands of kilometers wide. This eclipse is the 22nd of the 77 members of Saros series 145, which also produced the solar eclipse of August 11, 1999. Members of this series are increasing in duration. The longest eclipse in this series will occur on June 25, 2522 and last for 7 minutes and 12 seconds.

The total eclipse will have a magnitude of 1.0306 and will be visible from a narrow corridor through the United States. It will be first seen from land in the US shortly after 10:15 a.m. PDT at Oregon’s Pacific coast, and then it will progress eastward through Salem, OR, Casper, WY, Lincoln, NE, Kansas City, Nashville, TN, Columbia, SC, and finally Charleston, SC.  Total Solar Eclipse will darken skies all the way from Oregon to South Carolina, along a stretch of land about 70 miles (113 kilometers) wide. People who descend upon this “path of totality” for the big event are in for an unforgettable experience. A partial eclipse will be seen for a greater time period, beginning shortly after 9:00 a.m. PDT along the Pacific Coast of Oregon.

The longest duration of totality will be 2 minutes 41.6 seconds at about 37°35′0″N 89°7′0″W in Giant City State Park, just south of Carbondale, Illinois, and the greatest extent (width) will be at 36°58′0″N 87°40′18″W near the village of Cerulean, Kentucky, located in between Hopkinsville, KY and Princeton, KY. This will be the first total solar eclipse visible from the Southeastern United States since the solar eclipse of March 7, 1970, which was only visible from Florida.


A partial solar eclipse will be seen from the much broader path of the Moon‘s penumbra, including all of North America, northern South America, Western Europe, and some of Africa.

If you are interested in observing this event (total Solar Eclipse), below, in italics, is excerpt from “Eye Safety During Solar Eclipses” from NASA:

The Sun can be viewed safely with the naked eye only during the few brief seconds or minutes of a total solar eclipse. Partial eclipses, annular eclipses, and the partial phases of total eclipses are never safe to watch without taking special precautions. Even when 99% of the Sun’s surface is obscured during the partial phases of a total eclipse, the remaining photospheric crescent is intensely bright and cannot be viewed safely without eye protection [Chou, 1981; Marsh, 1982]. Do not attempt to observe the partial or annular phases of any eclipse with the naked eye. Failure to use appropriate filtration may result in permanent eye damage or blindness!

Generally, the same equipment, techniques and precautions used to observe the Sun outside of eclipse are required for annular eclipses and the partial phases of total eclipses [Reynolds & Sweetsir, 1995; Pasachoff & Covington, 1993; Pasachoff & Menzel, 1992; Sherrod, 1981]. The safest and most inexpensive of these methods is by projection, in which a pinhole or small opening is used to cast the image of the Sun on a screen placed a half-meter or more beyond the opening. Projected images of the Sun may even be seen on the ground in the small openings created by interlacing fingers, or in the dappled sunlight beneath a leafy tree. Binoculars can also be used to project a magnified image of the Sun on a white card, but you must avoid the temptation of using these instruments for direct viewing.

The Sun can be viewed directly only when using filters specifically designed for this purpose. Such filters usually have a thin layer of aluminum, chromium or silver deposited on their surfaces that attenuates ultraviolet, visible, and infrared energy. One of the most widely available filters for safe solar viewing is a number 14 welder’s glass, available through welding supply outlets. More recently, aluminized mylar has become a popular, inexpensive alternative. Mylar can easily be cut with scissors and adapted to any kind of box or viewing device. A number of sources for solar filters are listed below. No filter is safe to use with any optical device (i.e. – telescope, binoculars, etc.) unless it has been specifically designed for that purpose. Experienced amateur and professional astronomers may also use one or two layers of completely exposed and fully developed black-and-white film, provided the film contains a silver emulsion. Since all developed color films lack silver, they are always unsafe for use in solar viewing.

Unsafe filters include color film, some non-silver black and white film, medical x-ray films with images on them, smoked glass, photographic neutral density filters and polarizing filters. Solar filters designed to thread into eyepieces which are often sold with inexpensive telescopes are also dangerous. They should not be used for viewing the Sun at any time since they often crack from overheating. Do not experiment with other filters unless you are certain that they are safe. Damage to the eyes comes predominantly from invisible infrared wavelengths. The fact that the Sun appears dark in a filter or that you feel no discomfort does not guarantee that your eyes are safe. Avoid all unnecessary risks. Your local planetarium or amateur astronomy club is a good source for additional information.

In spite of these precautions, the total phase (and only the total phase) of an eclipse can and should be viewed without filters. It is crucial that you know when to take off and put back on your glasses; see Eye safety during a total solar eclipse

Viewing from outside the United States

A partial eclipse will be visible across the width of Canada, ranging from 89% in Victoria, British Columbia to 11% in Resolute, Nunavut.

A partial eclipse will be visible from Central America, Mexico, and the Caribbean islands. 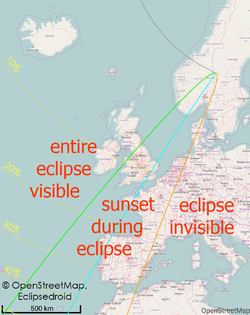 The boundaries of the sunset partial eclipse in Western Europe. Calculation with EclipseDroid with atmospheric refraction.