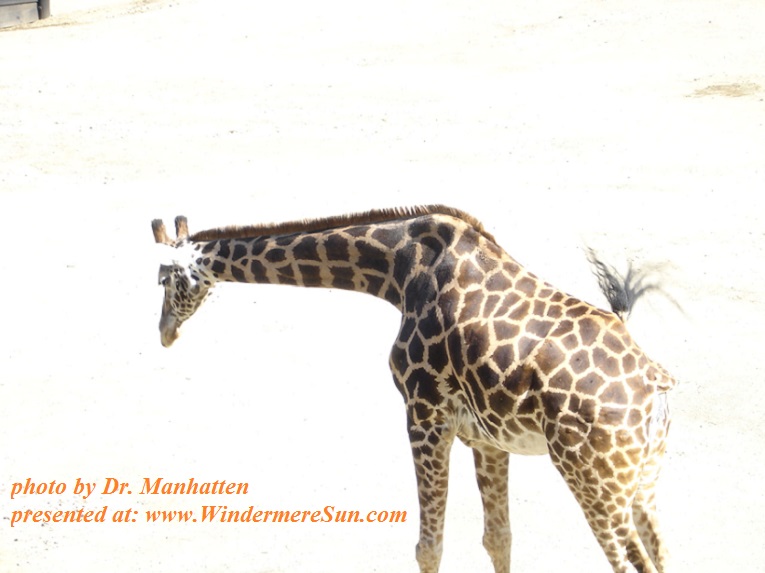 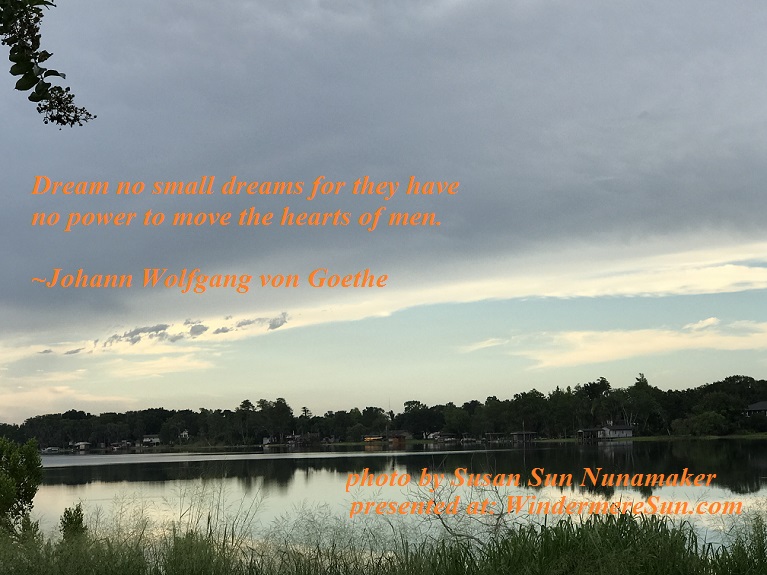 Dream no small dreams for they have no power to move the hearts of men. (quote by Johann Wolfgang von Goethe, presented at WindermereSun.com)

Yes, there are folks who kept giraffes as pets! Allow me to share with you what wikipedia has in store on the subject, below, in italics:

The giraffe (Giraffa) is a genus of African even-toed ungulate mammals, the tallest living terrestrial animals and the largest ruminants. The genus currently consists of one species, Giraffa camelopardalis, the type species. Seven other species are extinct, prehistoric species known from fossils. Taxonomic classifications of one to eight extant giraffe species have been described, based upon research into the mitochondrial and nuclear DNA, as well as morphological measurements of Giraffa, but the IUCN currently recognizes only one species with nine subspecies.

The giraffe’s chief distinguishing characteristics are its extremely long neck and legs, its horn-like ossicones, and its distinctive coat patterns. It is classified under the family Giraffidae, along with its closest extant relative, the okapi. Its scattered range extends from Chad in the north to South Africa in the south, and from Niger in the west to Somalia in the east. Giraffes usually inhabit savannahs and woodlands. Their food source is leaves, fruits and flowers of woody plants, primarily acacia species, which they browse at heights most other herbivores cannot reach. They may be preyed on by lions, leopards, spotted hyenas and African wild dogs. Giraffes live in herds of related females and their offspring, or bachelor herds of unrelated adult males, but are gregarious and may gather in large aggregations. Males establish social hierarchies through “necking”, which are combat bouts where the neck is used as a weapon. Dominant males gain mating access to females, which bear the sole responsibility for raising the young.

The giraffe has intrigued various cultures, both ancient and modern, for its peculiar appearance, and has often been featured in paintings, books, and cartoons. It is classified by the International Union for Conservation of Nature as Vulnerable to extinction, and has been extirpated from many parts of its former range. Giraffes are still found in numerous national parks and game reserves but estimations as of 2016 indicate that there are approximately 97,500 members of Giraffa in the wild, with around 1,144 in captivity.

Dream no small dreams for they have no power to move the hearts of men. (quote by Johann Wolfgang von Goethe, presented at WindermereSun.com)

Johann Wolgang von Goethe once said, “Dream no small dreams for they have no power to move the hearts of men.” More about him, excerpt from wikipedia, in italics, below:

Johann Wolfgang von Goethe (28 August 1749 – 22 March 1832) was a German writer and statesman. His works include epic and lyric poetry; prose and verse dramas; memoirs; an autobiography; literary and aesthetic criticism; treatises on botany, anatomy, and color; and four novels. In addition, numerous literary and scientific fragments, more than 10,000 letters, and nearly 3,000 drawings by him exist.

A literary celebrity by the age of 25, Goethe was ennobled by the Duke of Saxe-Weimar, Carl August in 1782 after taking up residence there in November 1775 following the success of his first novel, The Sorrows of Young Werther. He was an early participant in the Sturm und Drang literary movement. During his first ten years in Weimar, Goethe was a member of the Duke’s privy council, sat on the war and highway commissions, oversaw the reopening of silver mines in nearby Ilmenau, and implemented a series of administrative reforms at the University of Jena. He also contributed to the planning of Weimar’s botanical park and the rebuilding of its Ducal Palace, which in 1998 were together designated a UNESCO World Heritage Site.

His first major scientific work, the Metamorphosis of Plants, was published after he returned from a 1788 tour of Italy. In 1791, he was made managing director of the theatre at Weimar, and in 1794 he began a friendship with the dramatist, historian, and philosopher Friedrich Schiller, whose plays he premiered until Schiller’s death in 1805. During this period, Goethe published his second novel, Wilhelm Meister’s Apprenticeship, the verse epic Hermann and Dorothea, and, in 1808, the first part of his most celebrated drama, Faust. His conversations and various common undertakings throughout the 1790s with Schiller, Johann Gottlieb Fichte, Johann Gottfried Herder, Alexander von Humboldt, Wilhelm von Humboldt, and August and Friedrich Schlegel have, in later years, been collectively termed Weimar Classicism.

Arthur Schopenhauer cited Wilhelm Meister’s Apprenticeship as one of the four greatest novels ever written, along with Tristram Shandy, La Nouvelle Héloïse, and Don Quixote, and Ralph Waldo Emerson selected Goethe as one of six “representative men” in his work of the same name, along with Plato, Emanuel Swedenborg, Michel de Montaigne, Napoleon, and William Shakespeare. Goethe’s comments and observations form the basis of several biographical works, most notably Johann Peter Eckermann‘s Conversations with Goethe.