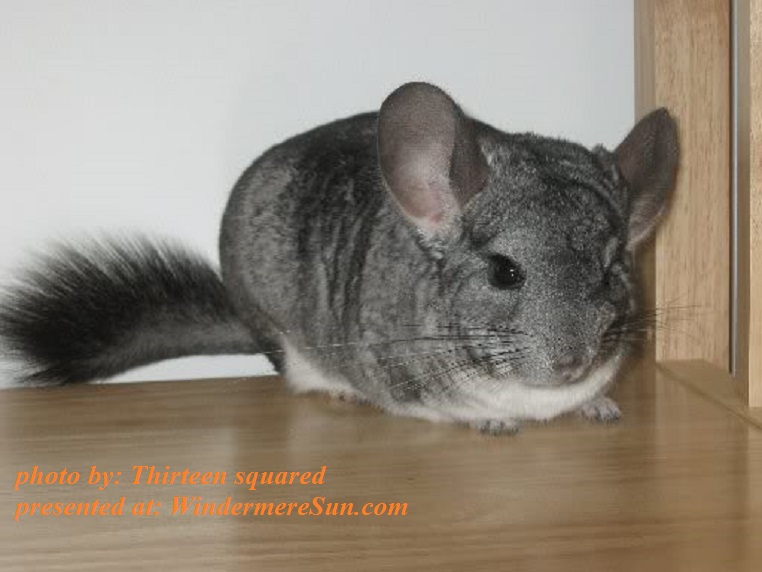 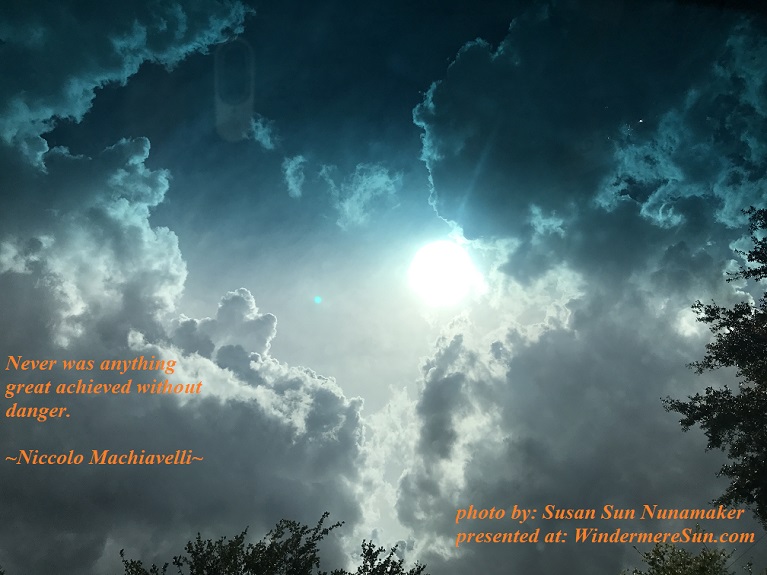 “Never was anything great achieved without danger.” (quote by Niccoloo Machiavelli, photo by Susan Sun Nunamaker, presented at: WindermereSun.com)

Really, we kept a chinchilla as a pet while our daughter was growing up. As a pet, chinchilla needs much care. Chinchillas must have extensive exercise and dental care, due to their teeth continually growing all throughout their life span, and since they lack the ability to sweat, temperatures need to be carefully controlled. They should be kept in an environment of 60 to 70 °F (16 to 21 °C). Always locate their cage in a well-lit area, but do not place the cage in direct sunlight or in drafts. Chinchillas instinctively clean their fur by taking dust baths, in which they roll around in special dust made of fine pumice, a few times a week; they do not bathe in water. If they get wet they should be dried off immediately or else their fur will grow fungus and they can possibly get a skin infection. Their thick fur resists parasites, such as fleas, and reduces loose dander. Their fur are truly heavenly….so soft to the touch……but keep in mind that chinchilla has strong muscles yet small bone at its hindleg and chinchilla loves to hop, so be sure to allow your chinchilla to exercise in an open area so injury is less likely to occur.

Below, in italics, are taken from wikipedia:

Chinchillas are two species of crepuscular rodents, slightly larger and more robust than ground squirrels. They are native to the Andes mountains in South America and live in colonies called “herds” at high elevations up to 4,270 m (14,000 ft). Historically, chinchillas lived in an area that included parts of Bolivia, Peru, Argentina, and Chile, but today colonies in the wild are known only in Chile. Along with their relatives, viscachas, they make up the family Chinchillidae.

The chinchilla (whose name literally means “clay”) has the second-densest fur of any land mammal, exceeded only by the sea otter and is named after the Chincha people of the Andes, who once wore its dense, velvet-like fur. By the end of the 19th century, chinchillas had become quite rare due to hunting for their ultra-soft fur. Most chinchillas currently used by the fur industry for clothing and other accessories are farm-raised.

“Never was anything great achieved without danger.” (quote by Niccolo Machiavelli, photo by Susan Sun Nunamaker, presented at: WindermereSun.com)

“Never was anything great achieved without danger.”  (quoted by Niccolo Machiavelli)