This is the day when United States of America will no longer be the leader of the world and will no longer be respected by other nations, with reason. Today, on June 1, 2017, President Donald Trump announces the decision on leaving the Paris Agreement. Paris Agreement is an agreement within the United Nations Framework Convention on Climate Change (UNF.CCC) dealing with greenhouse gas emissions mitigation, adaptation, and finance starting in the year 2020. The language of the agreement was negotiated by representatives from 195 countries at the 21st Conference of the Parties of the UNFCCC in Paris and adopted by consensus on Dec. 12, 2015. After several European Union states ratified the agreement in October 2016, there were enough countries that had ratified the agreement that produce enough of the world’s greenhouse gases for the agreement to enter into force. The agreement went into effect on 4 November 2016. Paris Agreement signifies that the whole planet can work together, to reduce carbon emission and to increase clean energy growth. Unless…..

French President, M. Emmanuel Macron, making sure that President Trump will be able to understand and hear clearly, spoke in English, below:


But after President Trump’s announcement to withdrawal from the Paris Agreement, already, Germany’s challenger for the chancellorship, Martin Schultz, stated that he would refuse to engage in transatlantic trade talks and that it would be impossible to grant better market access to the U.S. if U.S. did not respect climate protection rules. Translation: there will be tariffs placed on products from USA.
“If the U.S. drops out of the climate agreement… for European trade policy, this means that American production sites don’t need to abide by the climate goals,” said the Social Democratic candidate, who was speaking at the WDR Europa Forum in Berlin. “That is a competitive distortion against which we can only protect ourselves by saying: Whoever wants to have access to our market, and the European market is the biggest market in the world, needs to respect the European standards.”

Soon after Trump’s announcement, the Tesla CEO Elon Musk also announced that he would no longer be part of the presidential councils based on Trump’s decision. It appears as though neither Pope Francis nor Elon Musk is able to reach President Trump. Musk agreed to become part of the Trump’s Business Advisory Council in the hope to inject some voice of reasoning for his environmental ideals. But  this withdrawal from the Paris Agreement was a deal breaker.

Tesla was not the only company that is displeased with today’s announcement. Apple, Google, Microsoft, Facebook, HP, Intel, Adobe, and 18 others composed and published an open letter to the president asking him not to remove the United States from the Paris Agreement. This letter was released last month and posted as a full-page ad in the New York Times, Wall Street Journal, and New York Post, presented below: 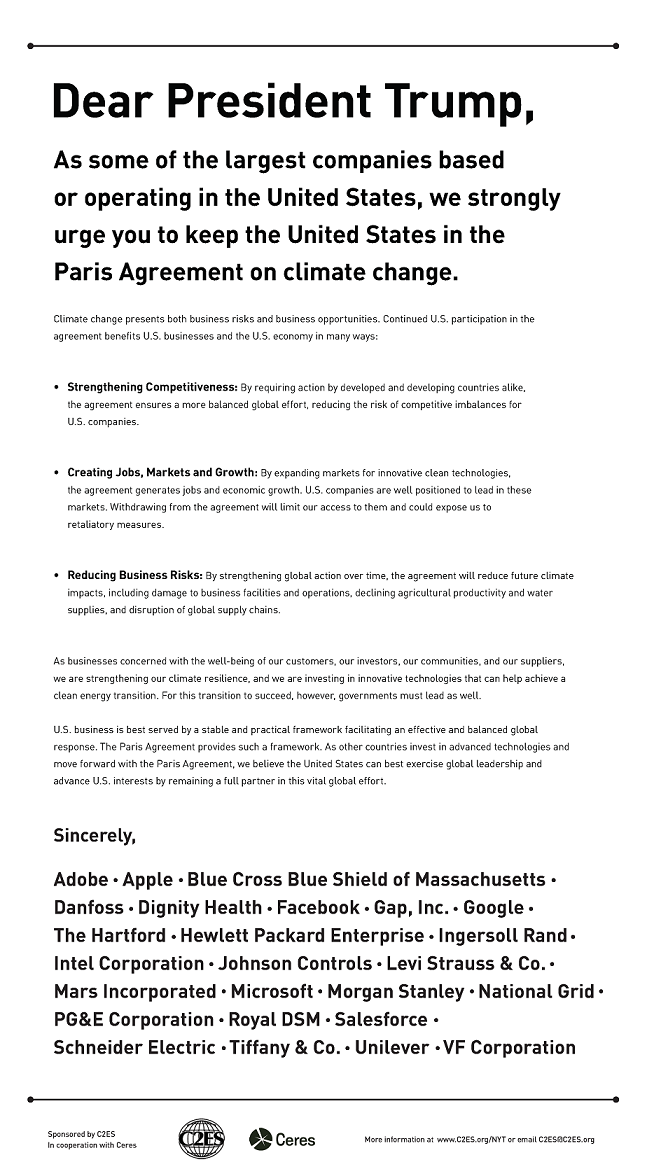 What President Trump has done is to:

Our economy and our position in the world will diminish after today if nothing will be done to remedy or reverse this situation.

My hats off to Governor Brown of California who is not deterred by President Trump’s decision and will continue to encourage climate activism for all Americans to take the most responsible, moral, and patriotic action.