It Is Still The Wild Wild West In Bozeman, Montana, For Greg Gianforte 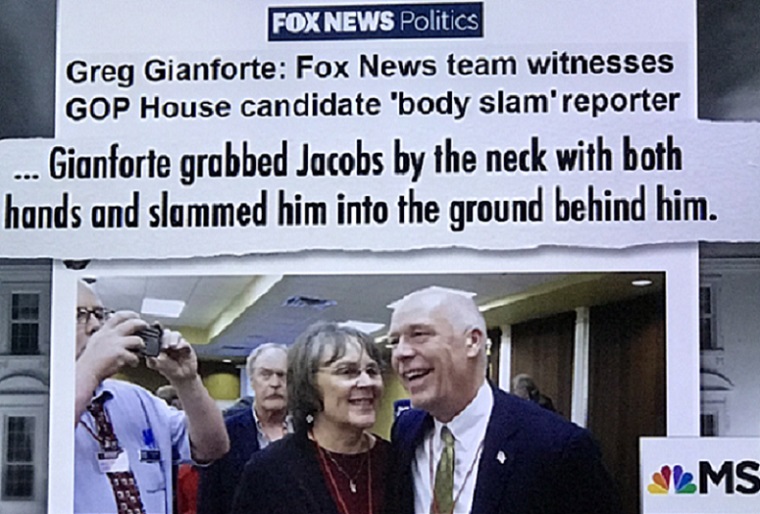 We’re living in a disturbing time, for in the heat of politics, basic observation of civil etiquette have been thrown totally out of the window. At the eve of Montana election, at Bozeman, Montana, the Montana GOP candidate, Greg Gianforte, is accused of bodyslamming the reporter of Guardian, Ben Jacobs, at a campaign volunteer BBQ for Greg Gianforte. Apparently the GOP candidate Gianforte did not like the fact that Ben Jacobs continued to ask questions at the BBQ and “Gianforte grabbed Jacobs by the neck with both hands and slammed him (Jacobs) into the ground behind him,” according to Fox News Politics. Jacobs ended up with broken glasses and was taken to the hospital in an ambulance. Buzzfeed News reporter also witnessed this incident in the video below:


An interview with the reporter Ben Jacobs, in the video, below:
Under normal civilized society, if Gianforte did not want to answer Jacobs’ questions, he had the choice of not answering Jacobs’ questions and even contact the police/sheriff if he wanted Jacobs to leave the premise (assuming Jacobs would refuse to leave). Is this an issue with candidate not understanding the law or is this an issue of Montana being a Western state?  We’d like to remind Mr. Gianforte that it is now 2017 and we’re no longer living in the Wild Wild West Era! Unfortunately more than 70% of the votes have already been mailed in. Gianforte appears to have the personality who does not believe that “no one is above the law”.
One cannot help but wonder if the fact that  having Trump in the commander-in-chief’s position has contributed to the coarsening of the American political culture. Video below, was taken at a Trump rally about a year ago :
Gathered, written, and posted by Windermere Sun-Susan Sun Nunamaker
More about the community at www.WindermereSun.com