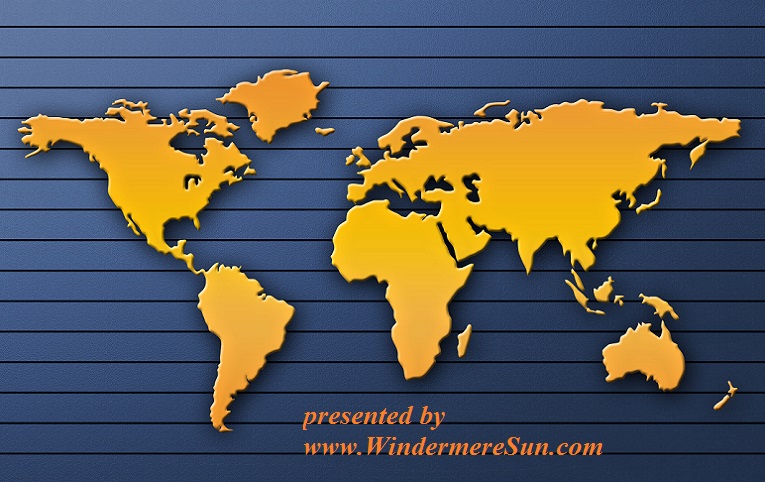 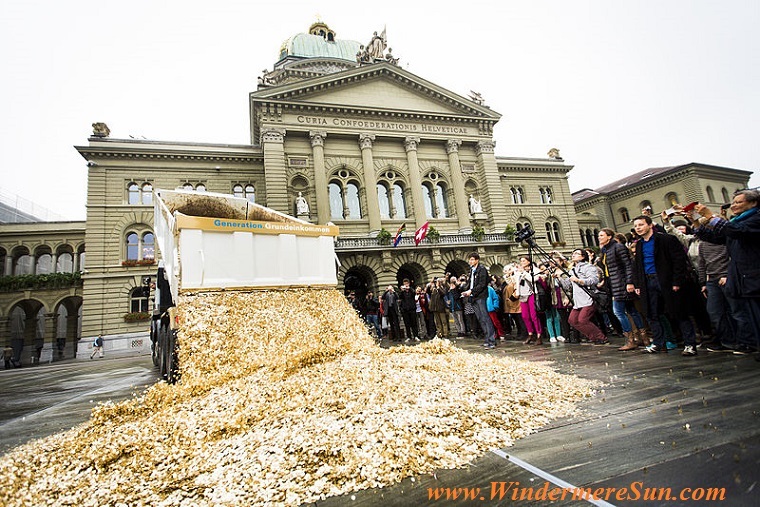 On October 4, 2013, Swiss activists from “Generation Grundeinkommen” organised a performance in Bern where eight millions of valid Swiss 5-cent coins (one per inhabitant) were dumped on a the Bundesplatz, as a celebration of the successful collection of more than 125,000 signatures for their federal popular initiative, which forced the government to hold a referendum on whether or not to incorporate the concept of basic income in the Swiss Federal Constitution. In 2016, the referendum resulted in 76.9% of votes against the introduction of a basic income. (photographed by Stefan Bohrer, presented by Windermere Sun-Susan Sun Nunamaker)

The other night, I’ve received messages from several of my readers and friends on the topic for future welfare and the coming of  robotic age. They are worried for all of those people who will potentially become jobless. So, I interjected, our future may not be so doom and gloom, for there’s been much discussion about universal basic income, free money for every one, some call it citizen’s dividend that would potentially replace our broken social security system. This concept of basic income for all is supported by both the left and right side of the political persuasion and had been experimented by various governments in U.S. and Canada in the 70’s and 80’s and later in Brazil, Mexico, South Africa, India, etc. Many researchers of these experiments concluded that the outcome of these experiments resulted in lowered: inequality,  poverty, infant mortality, health care costs, crime rates, and truancy, but higher school completion rate and higher economic growth and many other positive social outcomes. It may be the most efficient, cheapest, and most civilized way to combat poverty. Many have argued that this idea did not work before and why should it work now? The answer lies in the fact that our society, as a whole, is much wealthier now than that of our forefathers. It is also important to keep in mind that eradicating poverty is a form of investment in our society. It would save our government billions in lowered health care cost and crime rate while increasing more productive citizens. The speaker of this TEDx event, Rutger Bregman will share with you his thoughts on the subject. Below is his presentation and response to the three arguments that universal basic income is:

Basic income systems that are financed by the profits of publicly owned enterprises (often called social dividend, also known as citizen’s dividend) are major components in many proposed models of market socialism. Basic income schemes have also been promoted within the context of capitalist systems, where they would be financed through various forms of taxation. Similar proposals for “capital grants provided at the age of majority” date to Thomas Paine’s Agrarian Justice of 1795, there paired with asset-based egalitarianism. The phrase “social dividend” was commonly used as a synonym for basic income in the English-speaking world before 1986, after which the phrase “basic income” gained widespread currency. Prominent advocates of the concept include Rutger Bregman, André Gorz, Ailsa McKay, Guy Standing, Hillel Steiner, Peter Vallentyne, and Philippe Van Parijs.

Additional videos will also help to bring forth more recent information for this concept that is currently being experimented in multiple countries as a solution to poverty, inefficiency of various government programs, and future joblessness.


It is amazing to find out that a modest basic income was almost implemented during  Nixon Administration in the beginning of the 70’s in U.S. For those cynics who reject the possibility of universal basic income ever becoming a reality, Mr. Bregman would remind us all that “Utopias have a tendency of coming true.” and think of the end of slavery, equal rights for men and women, democracy, and to have patience and collective ambition. Be prepared for its coming in 30-40 years. Our worldview will be changed and will need to be changed as we are getting ready to step into a future of much automation and robots.

Further debate of its pros and cons, below:

Be sure to view this video below, of Robert B. Reich, professor of UC Berkeley, Harvard, etc. and former Minister of Labor during Clinton Administration, below:
Switzerland referendum  may not have voted in favor of universal basic income at this juncture, but promised to continue further investigation. Finland is also in the process of experimenting with this concept.

On 4 October 2013, Swiss activists from “Generation Grundeinkommen” organised a performance in Bern were eight millions of valid Swiss 5-cent coins (one per inhabitant) were dumped on a the Bundesplatz, as a celebration of the successful collection of more than 125,000 signatures for their federal popular initiative, which forced the government to hold a referendum on whether or not to incorporate the concept of basic income in the Swiss Federal Constitution. In 2016, the referendum resulted in 76.9% of votes against the introduction of a basic income. (photographed by Stefan Bohrer, presented by Windermere Sun-Susan Sun Nunamaker)

The universal basic income will prove to be the most progressive development in 21st century.  The issue regarding its source and timing will depend on the speed of the coming age of automation and productivity level of our future robots. It may increase or decrease future government roles, depending on how it will be implemented. Much remains to be seen. Its timing will be critical in determining the success of its outcome. Too soon (before automation productivity level is high enough) would invite the collapse of our economy. Too late (huge unemployment rate showing up in our economy) would introduce instability in our society. Regardless how and when, the fact it is being discussed and tested is a welcome progress, indicating that our world is sufficiently wealthy and paving its way toward a more valuable human society, while preparing for the coming of robotic age. Its potential as a solution to widening inequality and economic insecurity needs to be appreciated. Much further experimentation is definitely needed before actually implementing this concept. This is the time to discuss, test, and be creative in its experimentation.

You may be interested in: 9 Answers About Social Security